The Buffalo Bills close out the 2020 regular season against the Miami Dolphins on Sunday in Orchard Park. With a win, they’ll secure the No. 2 seed in the AFC playoff picture.

Here are three keys to the game, plus notes and stats:

Obviously, the first priority for the Bills is to get out of this game healthy and have everyone available to play in their first playoff game, next weekend.

As far as trying to be up on the scoreboard at the end, they’ll also need to protect the football against a very opportunistic Dolphins defense. Miami leads the National Football League in both total takeaways with 27 and interceptions with 16. Cornerback Xavien Howard leads the NFL with nine interceptions.

Although they haven’t had an interception in either if their past two games, the Dolphins have five games this season with multiple picks.

When these two teams played back in Week 2, Ryan Fitzpatrick was the starting quarterback for Miami.

That means the Bills will face rookie Tua Tagovailoa for the first time, and it will be his first time facing a Sean McDermott and Leslie Frazier-coached defense.

They’ll no doubt have a few wrinkles to throw at the rookie and test how well he responds. Maybe not even just for the sake of winning this game, but to also get a feel for what makes him uncomfortable should the two teams have to face each other again next week in the first round of the playoffs.

3.) Be ready for anything

Although they can still make it with a loss, if other games fall their way, the Dolphins can clinch a playoff berth with a win. They’ll do whatever it takes to make sure they get that done, and already have a penchant for faking punts and kicks, and being willing to run trick plays and take other risks.

Former Bills’ special teams coordinator Danny Crossman, now with Miami, has been very creative in the design of some of his fakes. And, of course, their head coach Brian Flores coached under Bill Belichick in New England, where they are never afraid to pull out a trick or two, especially in big games.

The Bills have to be ready and aware for anything, at any time. 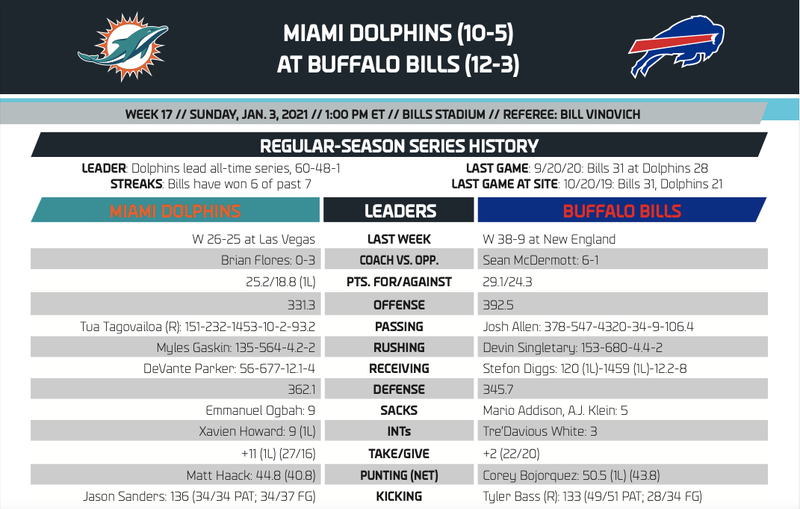