Buffalo, N.Y. (WGR 550) - In writing this, I feel like I am re-channeling my anger from 13 seconds this past January, which was something I promised my therapist I'd bury deep down inside.

But after Sunday's 21-19 loss on the road to the Miami Dolphins, I found myself in a similarly ticked-off mood.

But let’s start with the good news, shall we? That’s the least we can do after watching the Bills do everything in their power to beat themselves silly on Sunday.

The Bills are still the best team in the league, as well as the betting odds favorite to win Super Bowl LVII.

Surely, nothing Josh Allen did Sunday will harm his odds at winning an MVP this season. He broached career highs in attempts and completions, threw for 400 yards and nearly led multiple comeback attempts.

The word I’ll be focusing on is "nearly". 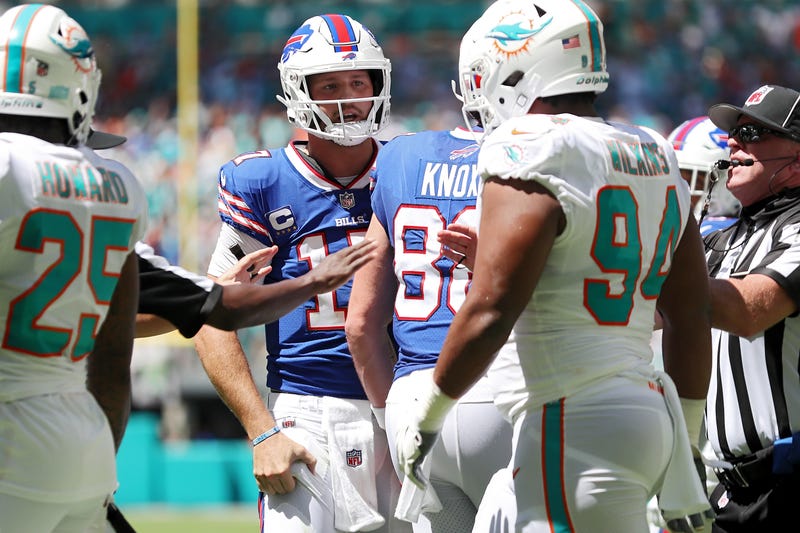 The Bills go as Allen goes, which is the mark of any great quarterback.

The Bills' lack of composure in one-score games is incredibly alarming for a Super Bowl contender. You see Allen with those red, rosy cheeks and immediately my blood pressure begins to rise.

If I am at the edge of my seat, blood pumping, butterflies raging, imagine the feeling of Allen’s teammates? If the moment is putting the franchise's most important player into a state of internal panic, that is going to resonate down the entire roster.

It did on Sunday.

Whether it was the frenzy at the end of the half, failing to stop the clock, effectively taking three points off the board to end the half or skipping a would-be go-ahead touchdown pass on fourth down at the two-yard line, Allen has momentary lapses of that "clutch" gene that the game's best tend to always possess.

But heck, it wasn’t a great Sunday for the clutch gene, period.

Brady failed to convert a two-point conversion in a last-second comeback against the Packers, and Mahomes all but vomited on himself in their late fourth quarter loss to the Indianapolis Colts, who were fresh off a 24-0 route from the (checks notes) Jacksonville Jaguars.

Trust me when I say this isn’t me picking on Allen, by any means. It happens to even the best of the best.

But the moment Sunday required the steady hand of a surgeon. When the moment became frantic, the team looked to a rattled Allen for its collective composure. In that moment, Allen failed.

But what it speaks to is a far more concerning trend.

The Bills are now 0-7 dating back to 2020 in one-score games. In fact, the last one-score game the Bills have come out the victor in was the AFC Wild Card game against the Colts in the 2020 season, which featured very few fans in the stands due to the COVID-19 pandemic.

I’m not sure that’s a narrative I am willing to run with just yet – that Allen played his best, most clutch football when there weren’t fans in the stands. But I can absolutely see why people might start pointing to that.

Now don’t get me wrong, Allen singlehandedly willed the Bills into a position to win the AFC Divisional Round game last year against the Chiefs, all but winning the game twice. He had the Kobe Bryant gene that night.

It was the coaching staff that blew that game, so for me Allen gets a pass.

But whether it’s slipping on fourth down at the one-yard line against the Tennessee Titans, a poor first half performance against the Buccaneers in Tampa Bay last season, or a complete unraveling in a must-win game against a Jacksonville team in the middle of mutiny against its head coach. There are more-and-more examples to lean on that Allen needs more composure when the moment requires it.

I’ll even go as far to say that the Bills won’t win a Super Bowl until Allen can bring his blood pressure down in these clutch moments. He found that clutch gene and went pound-for-pound with Mahomes last season, but Mahomes was still better.

The book now on this Bills team is they know how to blow you out, which is the mark of great teams.

However, the Bills haven’t proven to me that they know how to win close games, and that could be the downfall of a team searching for their first championship.

This huge concern of mine was on display against a Dolphins team hellbent on putting the Bills in a situation to beat themselves. Blitzing the daylights out of Allen every damn play, put the Bills in a position they hate. It forced them to win offensively with an immense amount of patience.

I thought Allen and the offense did a great job 85% of the time on Sunday. Allen took the check downs, he took the hot reads, and you saw that in the target numbers for Devin Singletary, James Cook and Isaiah McKenzie.

But what the Dolphins do with their blitz happy scheme is force an offense built on the big play to be perfect in situations that would otherwise frustrate them. The Bills lost in those 15% of plays.

The Dolphins made Ken Dorsey lose his head on national television too.

It’s composure, man. They must be better. 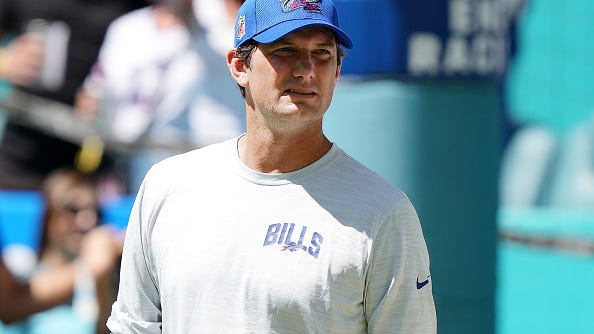 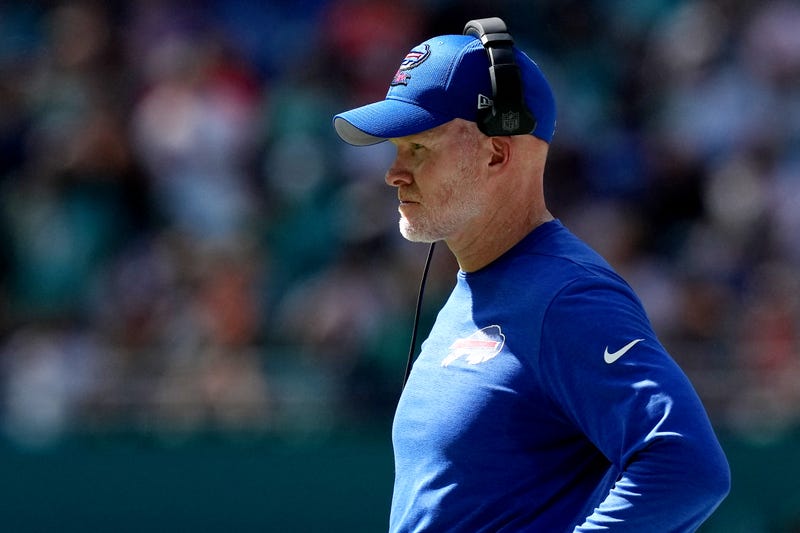 It’s easy to go for it on fourth down in the first quarter. It’s easy to make decisions when the game isn’t on the line.

But in the fourth quarter, on a 4th-and-4 at the Miami 20-yard line, head coach Sean McDermott decided to send Tyler Bass on to kick a field goal instead of putting his offense on the field. Bass missed the field goal, but that’s not the reason we should be critical of the decision.

Did this decision lose the Bills the game? It certainly did not. But I need McDermott to realize that a field goal still puts the Bills in a position to be down points if the Dolphins walk down the field and score a touchdown, which they later did.

You can’t have blind confidence in situations where the stakes are low, and then fold when the lights are on you late in football games.

But that’s the little thing, to me, in this game.

The bigger issue is rushing Dolphins quarterback Tua Tagovailoa with three on a 3rd-and-22. As if no one cared to watch the Dolphins comeback the week before against the Baltimore Ravens.

It wasn’t just blown coverages by the Ravens' secondary; it was playing prevent defense letting a downfield passing offense back into the football game.

My god man, this was 13 seconds all over again! Leslie Frazier, McDermott, come on guys!

If the expectation was that the Dolphins would check it down and punt the ball back to you when you have two backup safeties and a practice squad cornerback, then shame on you!

You gave Tagovailoa four seconds to wind up and uncork a rainbow into the heart of your defense on the most important play of the game. A 3rd-and-22!

Yes, the offense had multiple opportunities to get that back, but the Bills cannot, like, absolutely can’t in any world, give that play up in that moment. It’s fully on the coaching staff.

That play made me sick, and I hope it wakes this coaching staff up in a big way. They need to be better, and this can’t continue to be this team's blind spot.

We’re six years into this regime, and they can’t continue to make rookie coaching errors. It will cost this team a chance at a Super Bowl.

I’m going to hold myself back from going deeper into this, because it’s driving me absolutely crazy. Just unacceptable.

Alright, I’m off my soapbox now, but Sunday should be a major red flag.

If I am opposing teams on the Bills' schedule, I am taking a few pages from the Dolphins' playbook. I am putting the pressure on the Bills offense and defense to beat themselves. Force them to play perfect football, because for now, the Bills have proven they’re not yet up to the task.

Photo credit Losi and Gangi
We strive to be a platform where varying opinions may be voiced and heard. The views, thoughts, and opinions expressed by the author(s) of this article and/or by those providing comments are theirs alone, and do not represent those of Audacy, Inc. We are not responsible for any damages or losses arising from this article and/or any comment(s).
Featured Image Photo Credit: Jason Vinlove - USA TODAY Sports