Pittsford, N.Y. (WGR 550) - If there was an MVP through the first week of Buffalo Bills training camp at St. John Fisher University, it very well may have been awarded to Isaiah McKenzie, who shined through the first six practices.

The wide receiver picked up right where he left off on Monday for practice No. 7.

Late last week, I wrote in my practice notes that I was personally ready to declare McKenzie as "wide receiver No. 3" on this team, even with their plethora of weapons. I'm glad I made that declaration then, because I think a lot more people will be doing the same thing over the next several weeks. 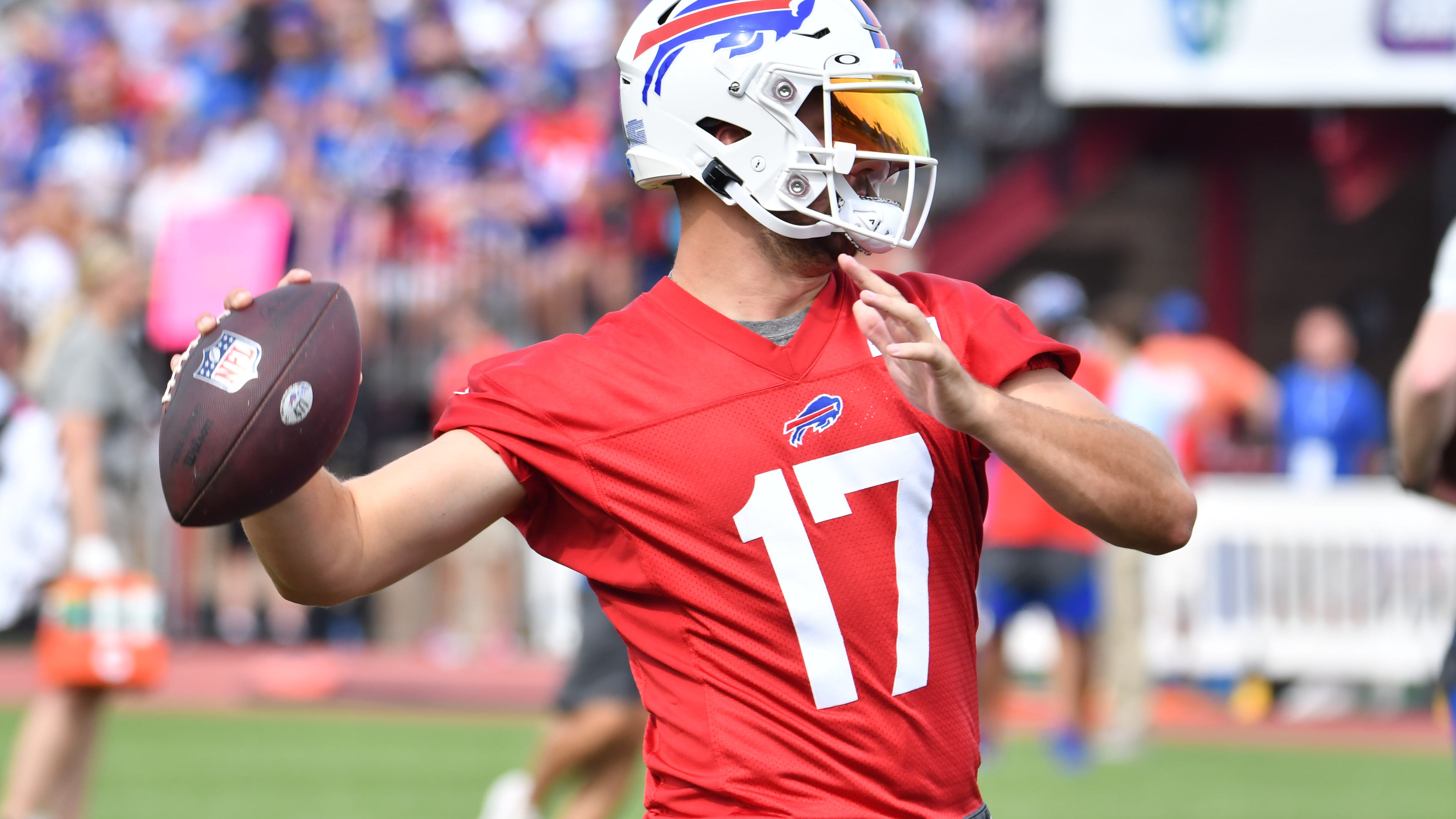 Josh Allen involved in skirmish on first day of pads

Even head coach Sean McDermott gave a telling statement when he met with the media prior to Monday's practice, saying the biggest adjustment for McKenzie in 2022 is going to be “potentially stepping into a full-time role” and teams game-planning for him.

That certainly is an indication that we will be seeing a lot more of him on the field on offense than we have in the past.

Once again on Monday, McKenzie made plays all over the field, from catching crossing routes and getting extra yards to grabbing a deep ball on the sidelines. He's been excellent since Day 1. 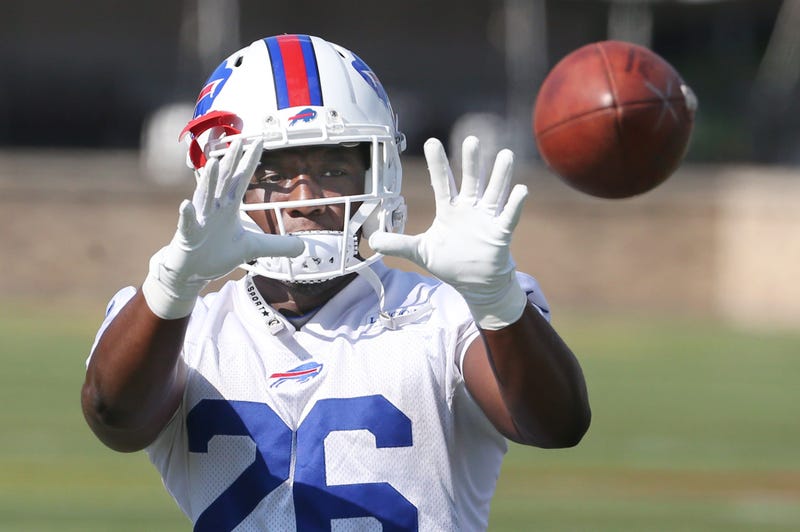 Being able to pass protect will be an important part of who plays and how often at running back.

The backs and tight ends worked 1-on-1 pass protection drills against the linebackers and safeties on Monday. I'd say Zack Moss had the best session of the bunch.

At 5-foot-11 and 190 pounds, rookie James Cook is going to have to find a way to get the job done. He did a nice job of that during the drill.

Cook seems to understand how to use his smaller size as leverage to get low and stay balanced against bigger pass rushers. He wasn't dominant, by any stretch, but he definitely held his own. That's really big for him, and the Bills. 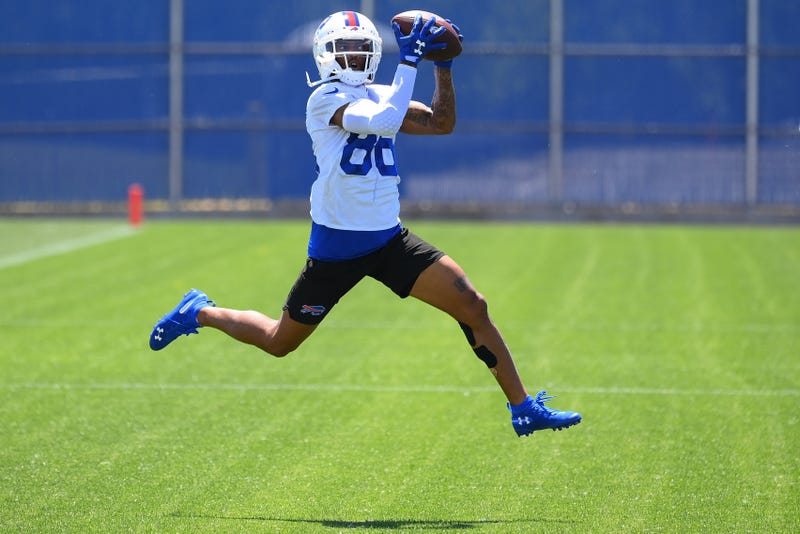 Once again, we had a dust-up at training camp. This time, it went even a little further with actual punches being thrown.

It started with defensive back Siran Neal getting involved with wide receiver Tavon Austin. After a couple punches were thrown, defensive end Boogie Basham and one of the offensive lineman (either Alec Anderson or Luke Tenuta, it was tough to tell) got into it and started throwing hands.

Lots of offensive and defensive players joined in, but it was quickly dispersed and both sides were onto the next play rather quickly.

There were two other rather large meetings between the two sides during the practice that didn't amount to much either time. 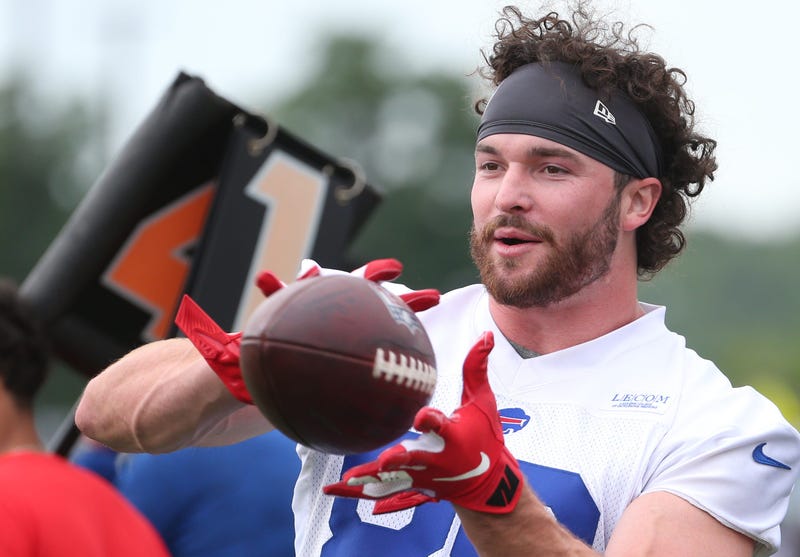 The offensive highlight of the day came during a two-minute drill between the starters on each side.

After a couple passes to get the ball down to around the defense's 30-yard line or so, quarterback Josh Allen hit tight end Dawson Knox with an absolutely beautiful strike between three defenders. Knox actually ran into the end zone, but because there is no tackling in these practices he was ruled down at the four-yard line.

Allen and the offense raced up to spike the ball and stop the clock. On the very next play, he hit Stefon Diggs right between the numbers for a touchdown. 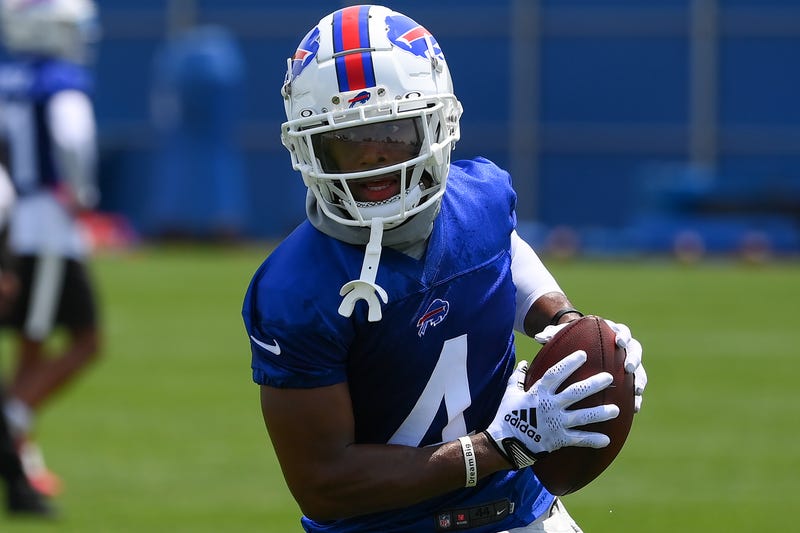 Not everything was perfect between Allen and Diggs. On one play, the wide receiver slipped as he turned around in his break, which allowed the ball to sail over his head. Safety Jaquan Johnson was in perfect position to grab it.

Rookie undrafted free agent Ja'Marcus Ingram also came up with an interception, this one off Matt Barkley. It was a really athletic play, with Ingram racing towards the sidelines to break up a pass, jumping to cut it off from the receiver, then being able to get both hands on it and both feet down before going out of bounds. 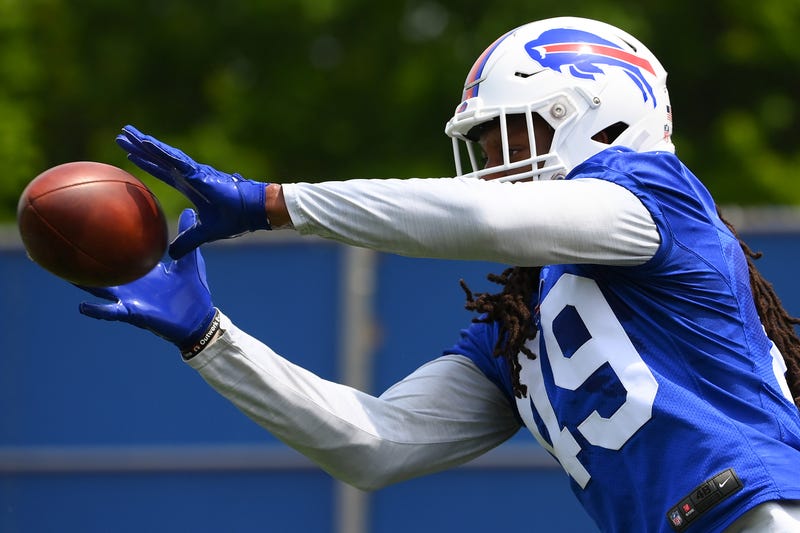 The play of the day on defense may have been turned in by linebacker Tremaine Edmunds, who did something so many fans, and even defensive coordinator Leslie Frazier have been clamoring for. He made a splash, game-changing type of play when he intercepted Allen towards the end of practice.

Edmunds dropped into coverage, read where Allen may be going and instinctively sprinted towards that spot. It appeared Allen did not see him going there, because he had an open receiver right there and the ball was on target.

Seemingly out of nowhere, Edmunds showed up, rose up, and held on to the pick as he came to the ground. It was one of those plays that remind you of the length and athleticism the Bills middle linebacker possesses, and one you want to see more of. 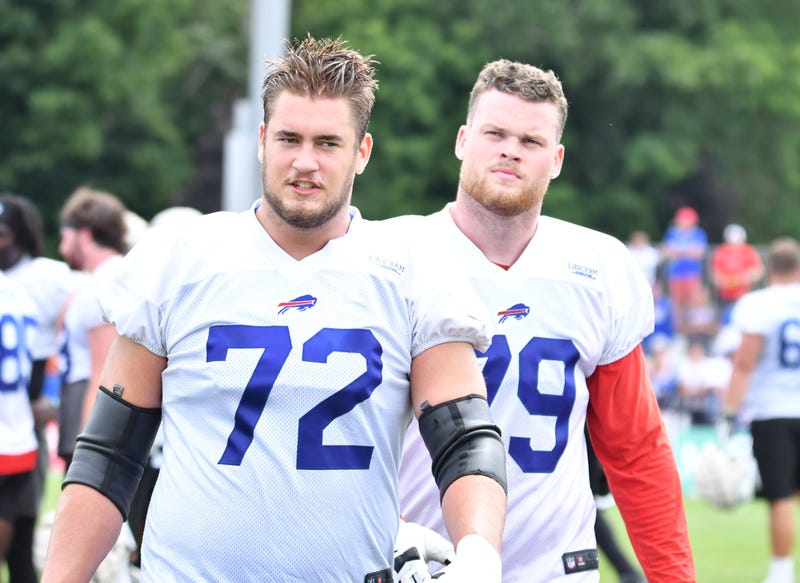 A few players returned to the field on Monday, but in different capacities.

The big name back to work was safety Micah Hyde. He returned to practice after injuring his hip/glute just two days ago, where he ended up leaving the sidelines on a cart.

Left tackle Dion Dawkins was back with the team after being excused from the last two practices for personal reasons. He was a full participant.

Wide receiver Jamison Crowder was in pads, but didn't do much. Crowder hasn't been on the field since the very first practice on July 24.

Once again, offensive tackle Spencer Brown did not participate in any offense on defense team work, but did do positional work.

Offensive tackle Tommy Doyle was injured during the session. He was on the ground and then stood up and stayed stationary for several minutes as trainers tended to him. He then walked off on his own power and went to the locker room. No update on his status was given.

The team will be back on the field at St. John Fisher University on Tuesday morning for another 9:45 a.m. ET start. The practice is open to the public, but a ticket is required to attend.