Orchard Park, N.Y. (WGR 550) - The NFL has announced the Buffalo Bills will host the Miami Dolphins on Saturday, Dec. 17 at 8:15 p.m. EST for their Week 15 matchup at Highmark Stadium in Orchard Park.

The game will air nationally on NFL Network, and locally on WKBW-TV Channel 7.

Our Week 15 game against the Dolphins will be on Saturday, December 17 at 8:15 PM on @NFLNetwork.

The Dolphins defeated the Bills, 21–19, back in Week 3 of the season in Miami. The two teams are currently separated by one game in the AFC East standings, with the Bills sitting in first place at 9-3 and the Dolphins right behind them at 8-4.

Buffalo will host the New York Jets this coming Sunday afternoon, while Miami is in Los Angeles to take on the Chargers on "Sunday Night Football".

In addition to this change, the league also announced two other games that will be played on Saturday that weekend, in addition to a replacement of the originally scheduled matchup between the New England Patriots and Las Vegas Raiders on Sunday night at Allegiant Stadium.

The "Sunday Night Football" game that week will now feature the New York Giants taking on the Washington Commanders at FedEx Field. Both teams matched up on Sunday in East Rutherford, New Jersey at MetLife Stadium, where that game ended in a 20-20 tie. 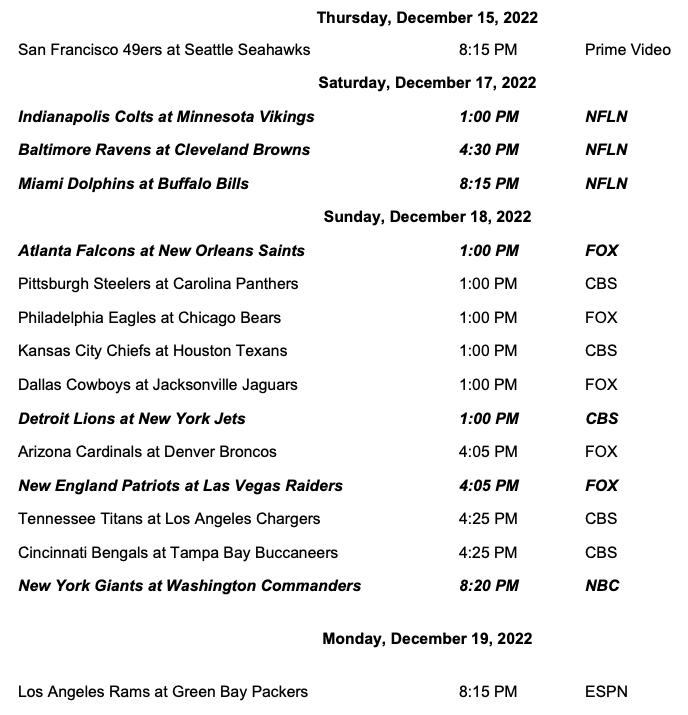