However, the defense shut down and shut out the Ravens offense the rest of the game, while Josh Allen was Josh Allen. That combination made the difference in a big 23-20 win in Baltimore for the now 3-1 Bills.

The defense was truly a group effort, but I do want to single out the play of linebackers Matt Milano and Tremaine Edmunds.

Both players had outstanding performances, and the pair combined for 22 tackles, four for loss and a quarterback hit. Both guys made some big time tackles on the incredibly elusive Ravens quarterback Lamar Jackson, and kept him from making bigger plays with his legs.

Edmunds, by the way, has consistently been producing splash plays through the first four games.

The return of safety Jordan Poyer made a huge difference for the Buffalo defense.

Poyer ended up with two interceptions, including the huge takeaway in the end zone that kept the game tied at 20-20, and set the Bills offense up for, what turned out to be, a game-winning drive. Poyer made a great read on the play, and was able to sprint from the middle of the end zone to the corner, where an open Devin Duvernay was waiting for the Jackson pass.

The Bills defense held Jackson to just 36 yards passing in the second half, with the two Poyer picks also included.

After giving up a touchdown on each of the first two Ravens drives (one was a drive start at the Bills' four-yard line) the defense dominated, yielding just two field goals on Baltimore's last seven possessions.

Offensively, have I already mentioned that Allen guy?

The Bills quarterback wasn't great, but he came through in the clutch, while totaling 283 yards and a couple of touchdowns. His legs were, again, a huge weapon, whether it was designed runs or scrambles.

Before halftime, Allen was 6-of-9 for 63 yards in the air, with five different receivers registering a reception. That drive was capped off with the touchdown pass to Isaiah McKenzie.

Buffalo's first drive of the second half saw Allen pull off a 20-yard run, and later picked up a low snap on 3rd-and-4 and turned it into a first down run. Also on this drive, facing a 4th-and-1, it looked like Allen wanted to pass to running back Devin Singletary but he was covered, so the Bills quarterback kept it and ran for another first down.

On the game-tying touchdown drive in the third quarter, Allen was 4-of-6 for 59 yards, and tied the score with an 11-yard touchdown run.

It was the game-winning field goal drive where Allen was probably his best, especially with a perfectly placed 20-yard throw over two Ravens defenders to tight end Dawson Knox on 3rd-and-2 from the Bills' 28-yard line. The throw of the game.

Allen also did his Houdini routine on a 2nd-and-3 from the Ravens' 45-yard line, as he spun out of, what looked to be, a sack and then completed a nine-yard pass to Khalil Shakir.

In addition, Allen also did a nice job of selling a roughing the passer call against the Ravens that moved the Bills from the 41-yard line to the 26-yard line. 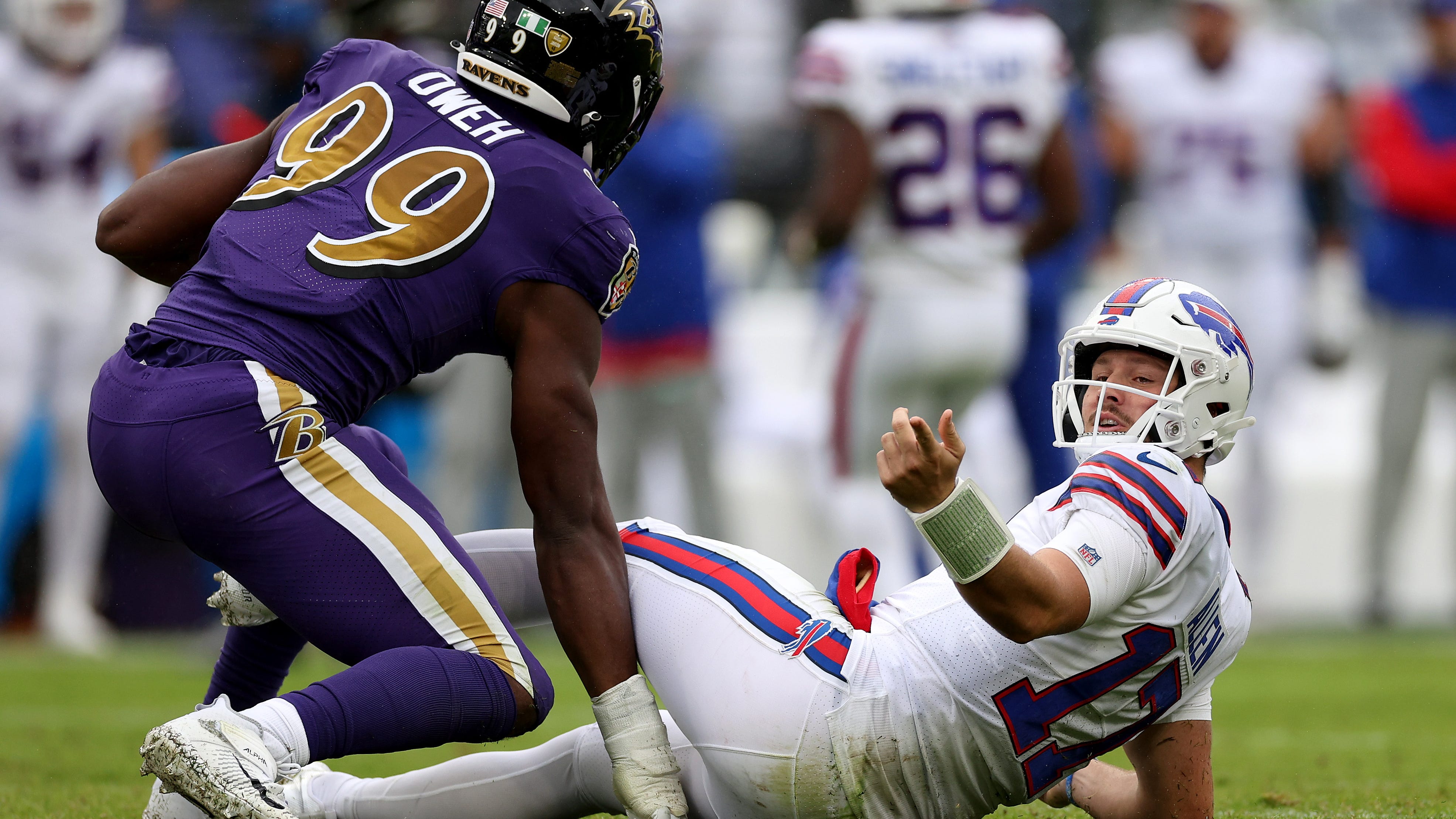 Controversial roughing the passer goes against Ravens in loss to Bills

Instead of being in the pack of 2-2 teams in the AFC, the Bills are with the Miami Dolphins and Kansas City Chiefs as the only 3-1 teams in the conference.

Photo credit Losi and Gangi
We strive to be a platform where varying opinions may be voiced and heard. The views, thoughts, and opinions expressed by the author(s) of this article and/or by those providing comments are theirs alone, and do not represent those of Audacy, Inc. We are not responsible for any damages or losses arising from this article and/or any comment(s).
Featured Image Photo Credit: Tommy Gilligan - USA TODAY Sports