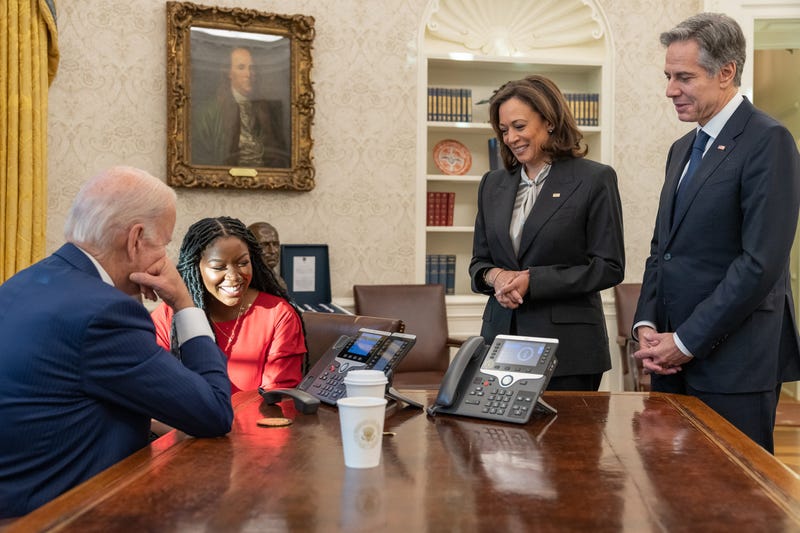 President Biden speaking to Brittney Griner on a phone at the White House after her release from Russian prisons on drug charges. Photo credit The White House
By KNX News 97.1 FM

The singular trade exchanged international arms dealer Viktor Bout and received final approval from President Biden within the last week, according to sources familiar with the deal. The swap, first reported by CBS News, took place Thursday in the United Arab Emirates.

Notably, the Griner-for-Bout exchange leaves retired U.S. Marine Paul Whelan imprisoned in Russia. Whelan has been in Russian custody for nearly four years. He was convicted on espionage charges that the U.S. has called false.

Moments ago I spoke to Brittney Griner.

Griner was detained at a Russian airport in February and later pleaded guilty to charges stemming from the discovery of cannabis-derived oil cartridges in her luggage.

After five months of stalled diplomacy and various permutations of potential swap arrangements — including a previously unreported offer by the U.S. this past summer to send two prisoners back to Russia for the two Americans — sources say the one-for-one exchange came together over the last two weeks.

It remains unclear what led to the breakthrough, but the Biden administration made at least one concession by agreeing to reduce the swap to one American for one Russian.

Whelan, who once worked as a corporate security contractor, was in Moscow for a friend's wedding when he was detained at a hotel in December 2018. Russian authorities later sentenced him to 16 years in prison for espionage — a charge the U.S. and Whelan denied. This month marks the fourth anniversary of Whelan's time in Russian custody.

CBS News learned last Thursday that the Griner-for-Bout swap was in the offing but agreed to a White House request to hold the reporting because officials expressed grave concern about the fragility of the then-emerging deal.

The Biden administration officials warned that making details of the swap public beforehand would almost certainly lead Russia to pull out of the agreement and potentially endanger Griner's well-being.

President Biden was scheduled to speak around 8:30 a.m. PT. EXPLAINER: What Griner may endure in Russian penal system