Eric Hosmer practically fell into the Red Sox’ lap at the trade deadline. After he vetoed a trade to the Washington Nationals as part of the Juan Soto blockbuster, the San Diego Padres needed to move the veteran first baseman. And he’s found a home in Boston.

One Red Sox player in particular is extremely happy that they acquired Hosmer.

Relief pitcher Matt Strahm has been lucky enough to play with Hosmer on the Royals, Padres, and now the Red Sox. He raved about Hosmer to Rob Bradford of Audacy’s “The Bradfo Sho” podcast.

“I’ve been fortunate enough to be on his team every season I’ve been in the big leagues, so I’ve been with three different organizations and shared the field with him every year,” Strahm said (4:49 in player above). “His presence, from what I’ve experienced, is unmatched. Just his professionalism and how he carries himself. He’s also a very good vocal leader as well as lead by example. He’s, in my opinion, he’s the best of both worlds.”

Strahm played with Hosmer on the Royals in 2016 and 2017 before being traded to San Diego. The Padres then signed Hosmer in the 2018 offseason after hearing nothing but good things about him.

“I remember in 2018, A.J. Preller called me before signing him and asked me about him, and I’m like ‘Bro, there’s nothing on him. Whatever you’re looking for, it’s not there. He is what everyone says he is. He’s been the glue in every clubhouse I’ve been in,’” Strahm said.

Even when the Padres were going through a rebuild in Hosmer’s early years there, the first baseman made sure the team was on the right track.

“He just does a great job of keeping the team connected. He does a great job of bridging the gap from players to coaches, coaches to front office. He works well with everyone,” Strahm continued. “Like I said, you could interview all 30 teams, I don’t think you’re gonna find a bad word about him. He’s an unbelievable human and I’ve been very fortunate to spend every season with him.”

Hosmer was in trade rumors over the past few years as the Padres rose into contention, but he never let that bother him.

“Last year, I don’t think he got enough credit. I think he got drug under the rug last year with the media out in San Diego with the whole trade deadline thing,” Strahm said. “He did a great job of individual team meetings. That s–t don’t bother him because he is so professional. We’re all human, so of course, obviously, if your life’s gonna get uprooted and all that, stuff happens, you’re dealing with stuff, but to see him come to the field everyday and still be professional, which I don’t think got broadcasted enough of how well of a job he did that with what he went through last trade deadline. It speaks volumes of his character, in my opinion, of how professional he is that he puts the boys and his work first.”

“I felt like more of the guys were bothered of the rumors than Hosmer was himself. He is that important to a clubhouse and you can’t measure that,” he said. “No analytics guy has that measurement of what a person’s personality can bring to a team and how it can help out others.”

Strahm had a sneaking suspicion that the Red Sox would trade for Hosmer, so he was disappointed when he saw the news of the trade to Washington. Then he heard the actual trade.

“I told Kiké, I was like ‘Damn, dude. For some reason I thought we’d get him,’ obviously hearing the rumors San Diego trying to move him, whatever, and we needed some first base help. I was kind of down and then all of a sudden I’m sitting in the cold tub and Kiké walks in and he’s like ‘Dude, we just got Hosmer,’ I was like ‘Dude, don’t mess with me. No we didn’t,’ and then he shows me his phone. I was pumped and I immediately texted Hos, telling him I was jacked.”

Hosmer hasn’t found himself at the plate yet with the Red Sox, but he is strong defensively and important to the clubhouse. He has the option to opt-out of his contract after this season, or the Red Sox could release him without it costing them too much, but it may be worth keeping a glue guy on the team. 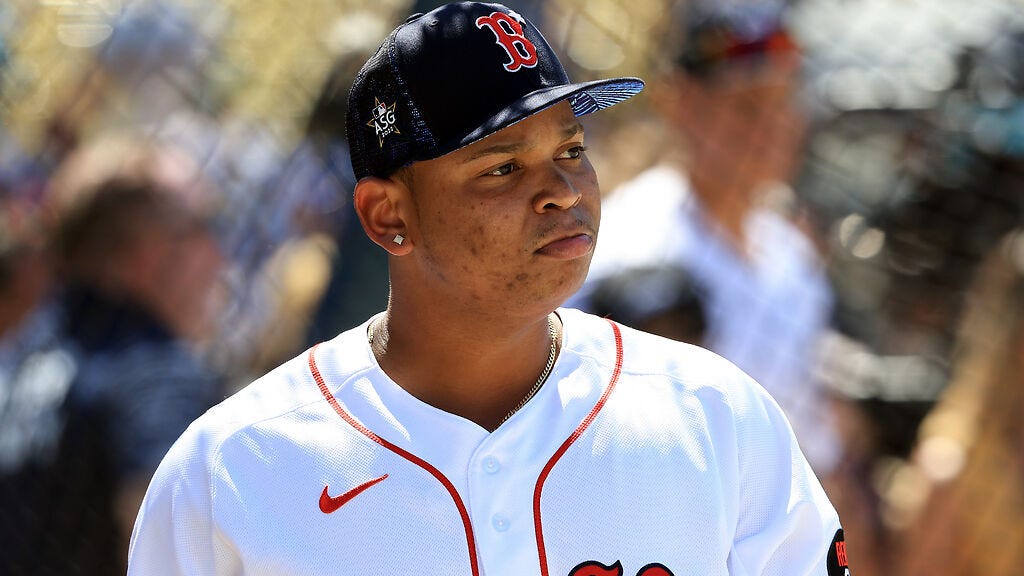