It's a great time to be a seller.

With the addition of the third Wild Card in each league, more teams will still be realistically in the playoff hunt late into the summer, potentially prompting them to make additions before the Aug. 2 trade deadline.

Beyond the addition of a third Wild Card, this year's trade market is particularly thin on star power, which could set the limited teams planning to sell up to receive lopsided returns for players that they ultimately part with.

As we enter hot stove season, here are the 15 best trade candidates: 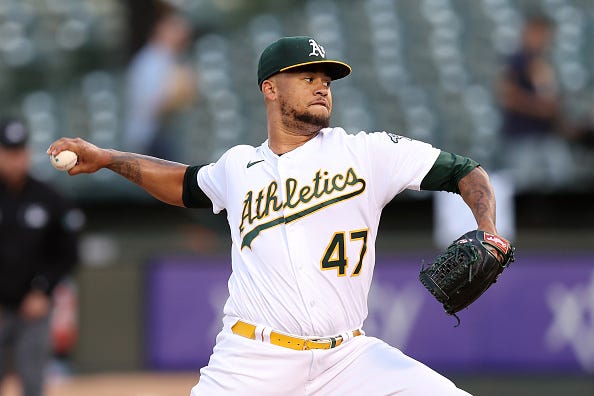 Montas exited his most recent start with "tightness in the back of his shoulder," though A's manager Mark Kotsay later called the 29-year-old day-to-day. Assuming Montas has no further physical setbacks, he's going to be in demand. Montas has a 3.26 ERA and 3.30 FIP across 96 2/3 innings in 2022. He's also has one remaining year of arbitration eligibility, so if you trade for Montas, you would be getting him for at least a season and a half. 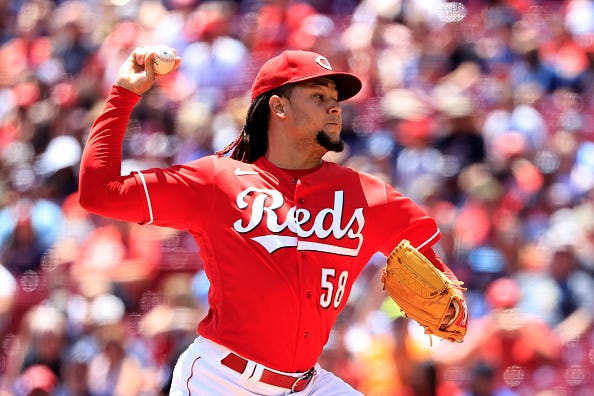 It feels like Castillo has been a trade candidate for much of his career, but this seems likely to be the year that Nick Krall and company will actually move him. Castillo has a 3.09 ERA and 3.24 FIP in 11 starts, erasing concerns about a shoulder injury that forced him to miss all of April. Like Montas, Castillo is 29 and can't become a free agent until after the 2023 season. 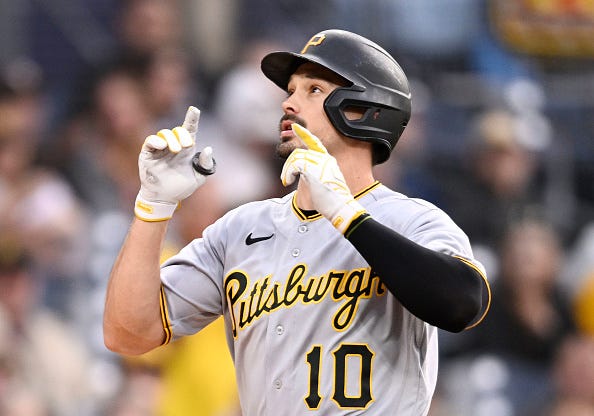 Given how few needle-movers there are at the center field position, Ben Cherington is going to field a lot of calls about Reynolds. The problem is that the Pirates, understandably, are going to want a ton if they're going to move a 27-year-old center fielder who posted a 6.1 fWAR a season ago. But to this point, Reynolds isn't matching that production from a season ago. Slashing .256/.330/.464 with a 1.1 fWAR is nice production, but it's not the borderline superstar level output the Pirates got from Reynolds in 2021. Reynolds recently signed a two-year/$13.5 million deal with the Pirates, but knowing he'll make $6.75 million in 2023 and is still under team control through 2025 could actually make him more coveted. It's just a matter of whether a team believes he's worth giving up a legitimate prospect haul for. 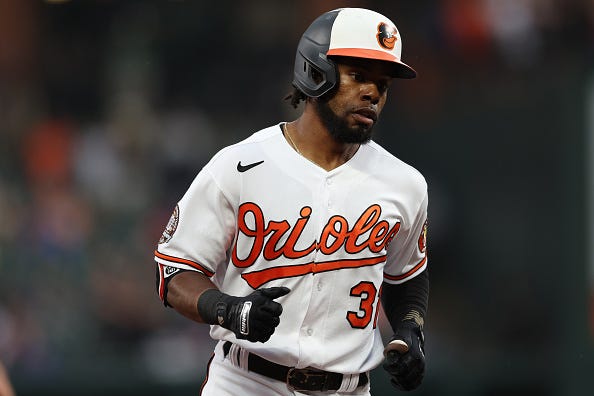 Mullins is in a pretty similar situation to Reynolds. A year ago, he homered 30 times and posted a 6.0 fWAR, numbers he feels unlikely to match in 2022. Still, Mullins has seven defensive runs saved in center field and a 2.1 fWAR, so there is definitely going to be interest in the 27-year-old. However, the Orioles posted a winning record in June, and have Mullins under team control through the 2025 season. We have doubt about whether Mike Elias would pull the trigger on a trade of Mullins. 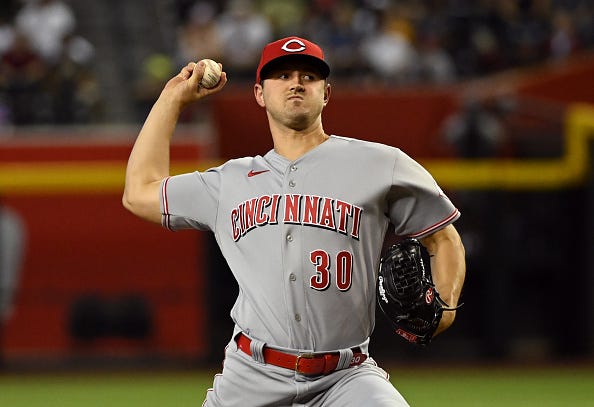 There may not be a plan in Cincinnati beyond slashing spending, but the Reds may be able to build a top-tier farm system in the process of tearing down their major league roster. Mahle, 27, has a 4.48 ERA in 2022, although his 3.55 FIP and 3.20 expected ERA suggest that he's due for some positive regression. Mahle -- who logged 180 innings in 2021 -- can't become a free agent until after the 2023 season. 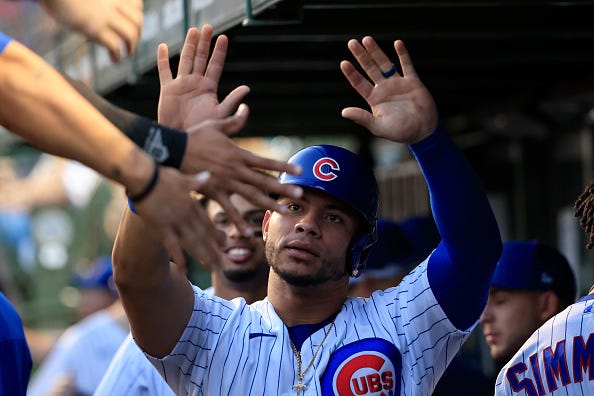 Contreras is likely headed to the All-Star Game for the third time in his career, and the free-agent-to-be could be traded by the Cubs shortly thereafter. On one hand, Contreras is a 30-year-old catcher that may just be a rental, and if he's not a rental, he's going to command a hefty contract. On the other hand, he's won a World Series and is one of the few catchers in the league that could legitimately change the trajectory of your season. 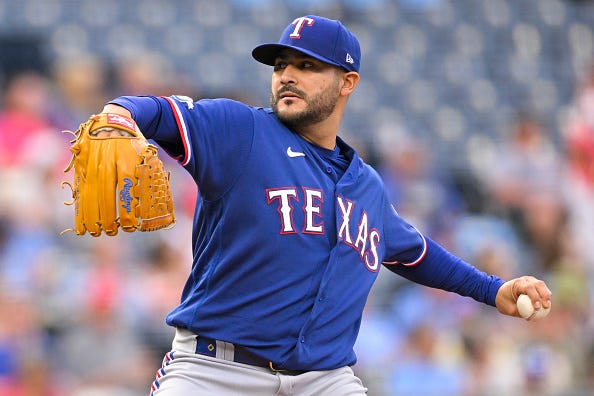 In his second go-round with the Rangers, Pérez is pitching at an All-Star caliber, as he has a 7-2 record with a 2.34 ERA and 2.86 FIP in 16 starts. There may be an inclination from the Rangers to try to re-sign Pérez, but the 31-year-old's value will never be higher. 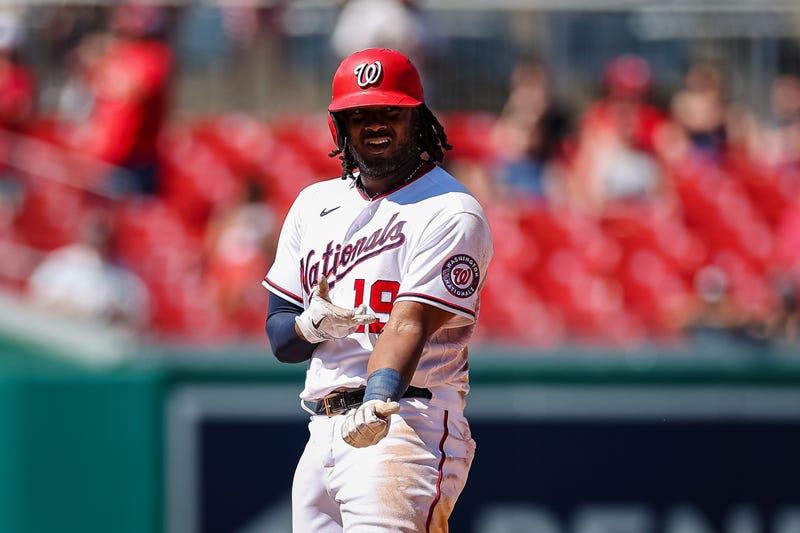 Bell is unlikely to ever top the 37 home runs he had with the Pittsburgh Pirates in 2019, but he's putting together the most complete season of his career for the lowly Nationals. The 29-year-old is slashing .315/.398/.508 with a .906 OPS in 2022. Bell is a switch hitter that grades out well defensively at first base. He's going to be a hot commodity over the next month. 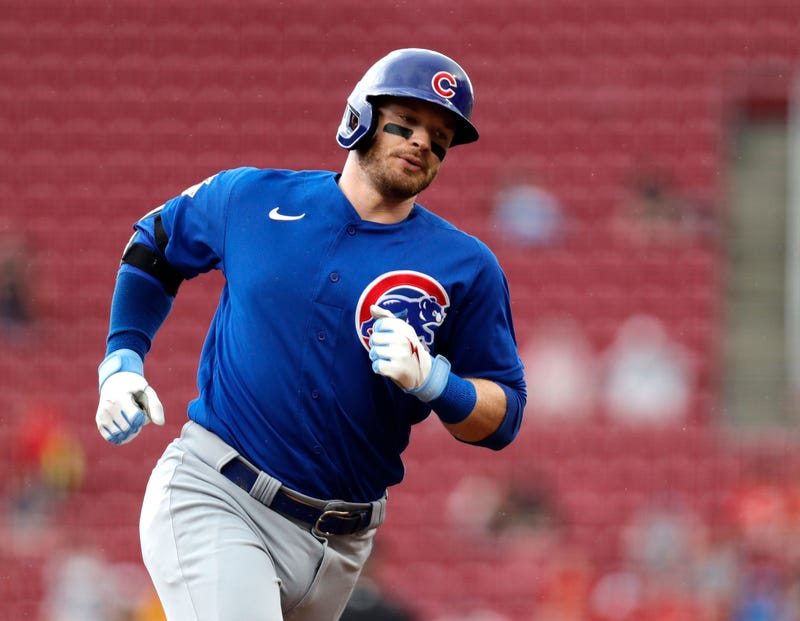 A former first-round pick, Happ is having the finest season of his career in 2022. But while the 27-year-old can't become a free agent until after the 2023 season, the Cubs are more than one year away from legitimately contending for anything. So more than a year before he can become a free agent may be a good time to trade Happ, who has an .842 OPS. 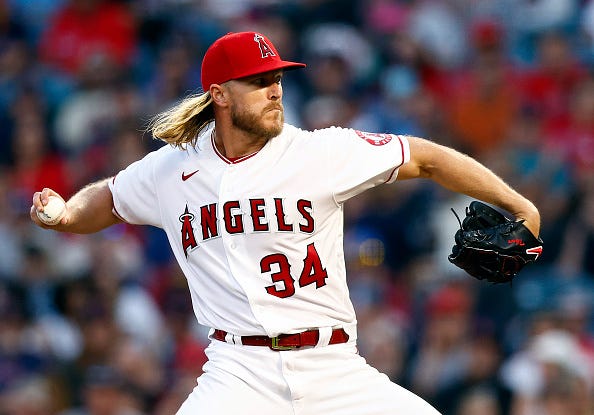 Now a veteran of Tommy John surgery, Syndergaard doesn't throw quite as hard as he once did. But the 29-year-old still has a tremendous repertoire of pitches, and front-line potential. At worst, Syndergaard would be a nice rental for the middle of your rotation, as he has matching 3.84 marks at ERA and FIP over 13 starts this season. At best, Syndergaard will rediscover the ace potential he showed early in his career with the New York Mets, and you'll have a chance to re-sign him before he hits free agency. 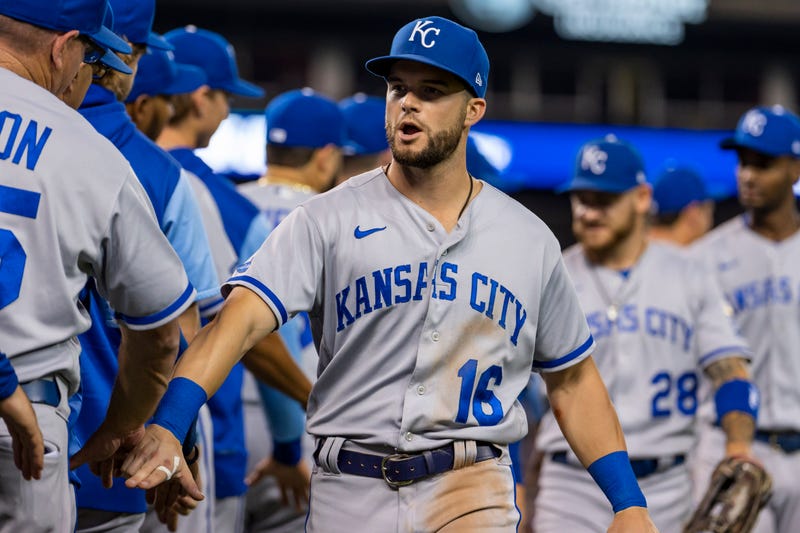 Benintendi perhaps never developed into the superstar he seemed destined to be when he broke into the league with the Boston Red Sox, but he's still going to draw quite a bit of interest this summer. The 28-year-old has just three home runs in 2022, but he's hitting .313 with a .381 on-base percentage and two defensive runs saved for the Royals. 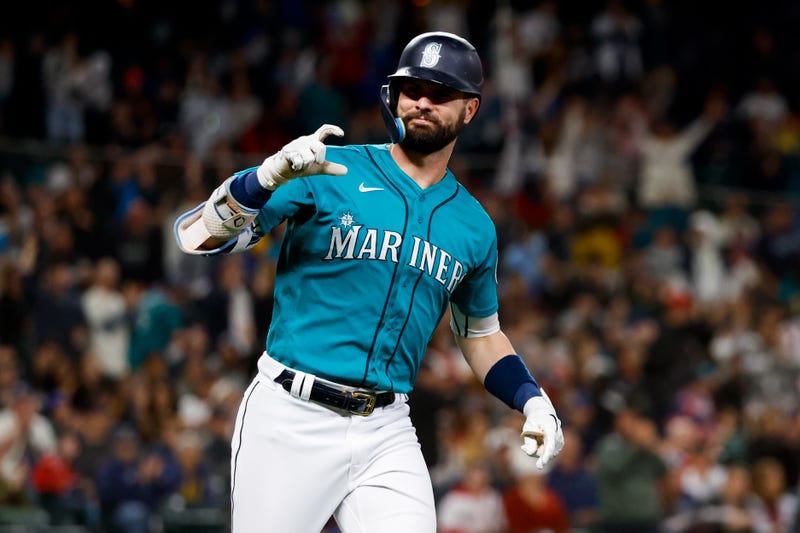 Winker has gone from playing his home games at Great American Ballpark to T-Mobile Park, and his offensive output has taken a major dip as a result. Still, Winker is a year removed from slashing .305/.394/.556 for the Reds, and is due an affordable $8.25 million in 2023. It wouldn't be hard for a general manager to sell themselves on Winker bouncing back at the plate after the All-Star Break. 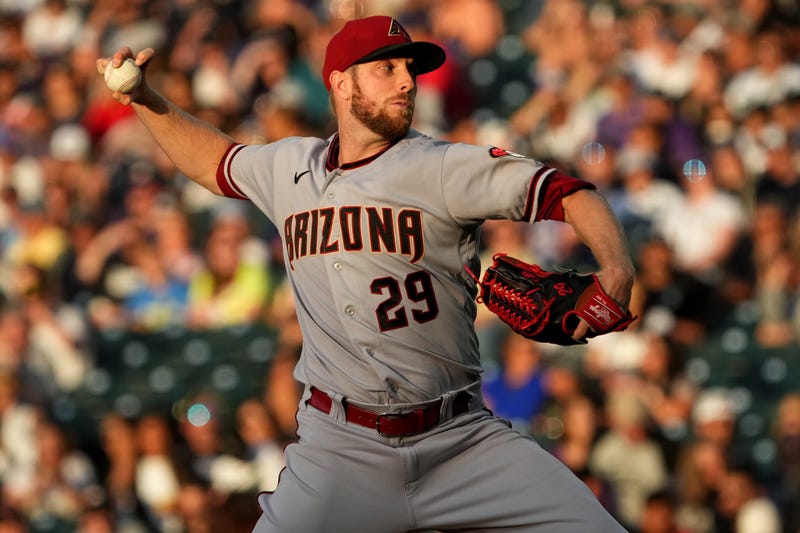 While USA Today's Bob Nightengale hears that Zac Gallen is unlikely to be traded, Kelly could be a starter that the D-Backs are willing to part with. The 33-year-old has a 3.46 ERA and 3.40 FIP over 91 innings in 2022. Kelly is due just $16 million over the next two seasons, with an affordable $7 million club option for 2025. For a team looking to solidify the back end of their rotation for a few years, Kelly would be a good addition. 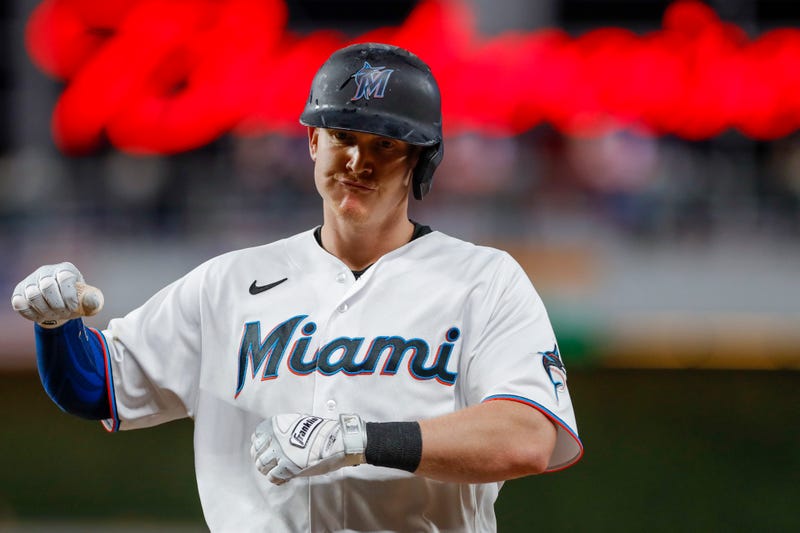 Cooper was a late bloomer, but he sure has bloomed. The 31-year-old is slashing .315/.382/.472 in 2022, and can play first base and both corner outfield positions in a pinch. Cooper has one remaining year of arbitration eligibility in 2023. 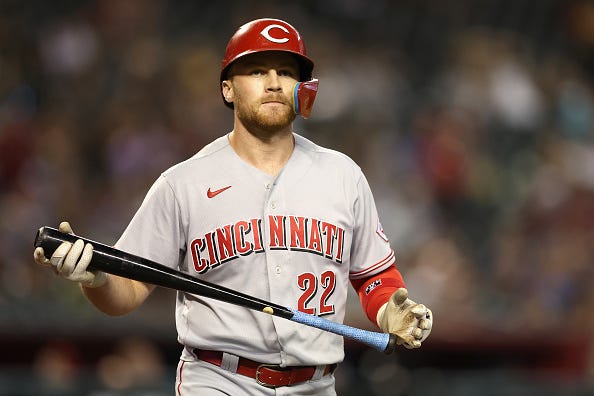 Buyer beware: Drury is putting up the best offensive numbers of his career in his first season playing his home games at Great American Ballpark. Still, it's hard to ignore an .851 OPS from someone that can play every infield position. The 29-year-old would be a nice rental addition for a contender.