The Buffalo Bills blowout the New England Patriots, 47-17, to advance to the AFC Divisional Round
By Brayton J. Wilson, WGR Sports Radio 550

The Buffalo Sabres are looking to continue their hot start to the 2021-22 season on Friday night with the Boston Bruins coming to town. With a win, the Sabres will sweep their season-opening four-game homestand at KeyBank Center, marking the team's best start to a season since the 2008-09 campaign.

The Sabres have opened the 2021-22 season in convincing fashion with three wins that saw the team dominating their opponents for most of the game at both ends of the ice. However, Friday night will be Buffalo's first true test of the year after wins over the Montreal Canadiens, Arizona Coyotes and Vancouver Canucks - three teams that may not be in playoff contention once the season comes to a close.

Buffalo did get off to a bit of a rough start on Tuesday night against the Canucks, playing some sluggish hockey from the start and trailing the contest, 2-1, through 20 minutes of play. However, the team finally got their feet under them in the final 40 minutes of play, and ended up taking it to Vancouver with a 5-2 win.

Only six teams in the NHL have played, at least, three games and remain unbeaten to start the season. Buffalo is one of the teams in the group along with the Florida Panthers, Edmonton Oilers, Carolina Hurricanes, St. Louis Blues and San Jose Sharks.

Buffalo's dominance is showing well with very solid, complete efforts at both ends of the rink.

Defensively, the Sabres have the seventh-lowest shots allowed rate in the NHL, averaging just 28.7 shots-against per-game.

Through three games, Buffalo has gotten some great goaltending from veterans Craig Anderson and Dustin Tokarski. The Sabres have only surrendered four goals in the opening three contests, with both goalies combining for a 1.33 goals-against average.

Anderson has earned starts in two of the three games for the Sabres this year, posting a 1.50 goals-against average and a .954 save percentage. The 40-year-old will get the start in goal on Friday night, as head coach Don Granato confirmed following the morning skate.

.@CraigAnderson41 will get the start between the pipes tonight. 😤#LetsGoBuffalo pic.twitter.com/hPX2GZlgoP

Tokarski has only one start so far this season, but it came in a 2-1 shootout win over the Coyotes last week Saturday. With Anderson starting on Friday night, it is very likely the 32-year-old will get the crease on Saturday night when the Sabres are in New Jersey to take on the Devils.

Offensively, the Sabres have shown the ability to control the pace of play, generate quality scoring chances, and also finish their chances.

Through three games, the Sabres are averaging an astounding 37.3 shots per-game, which is the fourth-best rate in the entire league. While their 11 goals so far this season is in the middle of the pack with all 32 teams, their 3.67 goals per-game is currently tied for eighth-best in the NHL.

Special teams has also been a huge part of Buffalo's success in the team's three-game winning streak. The Sabres are one of two teams (San Jose) who have yet to surrender a power play goal to their opposition this season. On the flip side, the power play has clicked well throughout the early portion of the season, converting on 36.4% of its chances, which is fifth-best in the NHL.

Zemgus Girgensons (2+2) and Colin Miller (0+4) are leading the way for the Sabres through the first three games in terms of production, each registering four points. Kyle Okposo (2+1) and Jeff Skinner (1+2) are also averaging a point per-game through three contests this season.

Girgensons and Okposo have excelled well on a line together with Cody Eakin. However, Eakin was forced to leave Wednesday's practice after crashing into the net during a team drill. He is expected to miss the next couple of games due to his injury.

With Eakin out of the lineup, it is expected that John Hayden will step into the lineup and take his place on a line with Drake Caggiula on the left wing and Arttu Ruotsalainen at center.

During Friday's morning skate, Anders Bjork was skating on the Okposo line playing on the left wing. Girgensons shifted over to the center position, where he got some work down the middle during training camp and the preseason.

The Sabres did get some good injury news on Friday with defenseman Mattias Samuelsson back on the ice with his teammates. The 21-year-old was injured blocking a shot during the Sabres Prospects Challenge and has not practiced since with a lower-body injury. He skated on the extra defensive pairing with Christian Wolanin.

As for the Bruins, they enter Friday's game having only played two games on the 2021-22 schedule so far, going 1-1-0 with a win over the Dallas Stars and a loss to the Philadelphia Flyers.

The Bruins will feature a pair of former Sabres in the lineup on Friday night in Downtown Buffalo.

Taylor Hall was traded to the Bruins ahead of the NHL Trade Deadline last season after a subpar stint with the Sabres. After producing just two goals and 19 points in 37 games with the Sabres, the 29-year-old went to Boston and produced eight goals and 14 points in just 16 games.

Hall ended up playing in six games against the Sabres after the trade deadline and produced well, scoring two goals and registering four assists for six points.

The former first overall pick in the 2010 NHL Draft is starting the season off skating on a line with Charlie Coyle at center and Craig Smith on the right wing.

Also getting into game action on Friday for Boston is goalie Linus Ullmark. He gets his first start of the 2021-22 campaign for the Bruins, as Jeremy Swayman started for the opening two game of the year.

Ullmark joined the Bruins this past offseason, signing as a free agent to a four-year deal with an average annual value of $5 million. The 28-year-old spent parts of six seasons with the Sabres, appearing in 117 games with a record of 50-47-13, and posting a .912 save percentage, a 2.78 goals-against average and three shutouts.

Former Sabres forward Curtis Lazar is also on the roster, but he is currently dealing with an upper-body injury and is out on a week-to-week basis.

Join Mike Schopp and the Bulldog for pregame coverage on WGR starting at 6 p.m. ET. Faceoff is slated for 7 p.m. ET with Dan Dunleavy and Rob Ray on the call of the game. 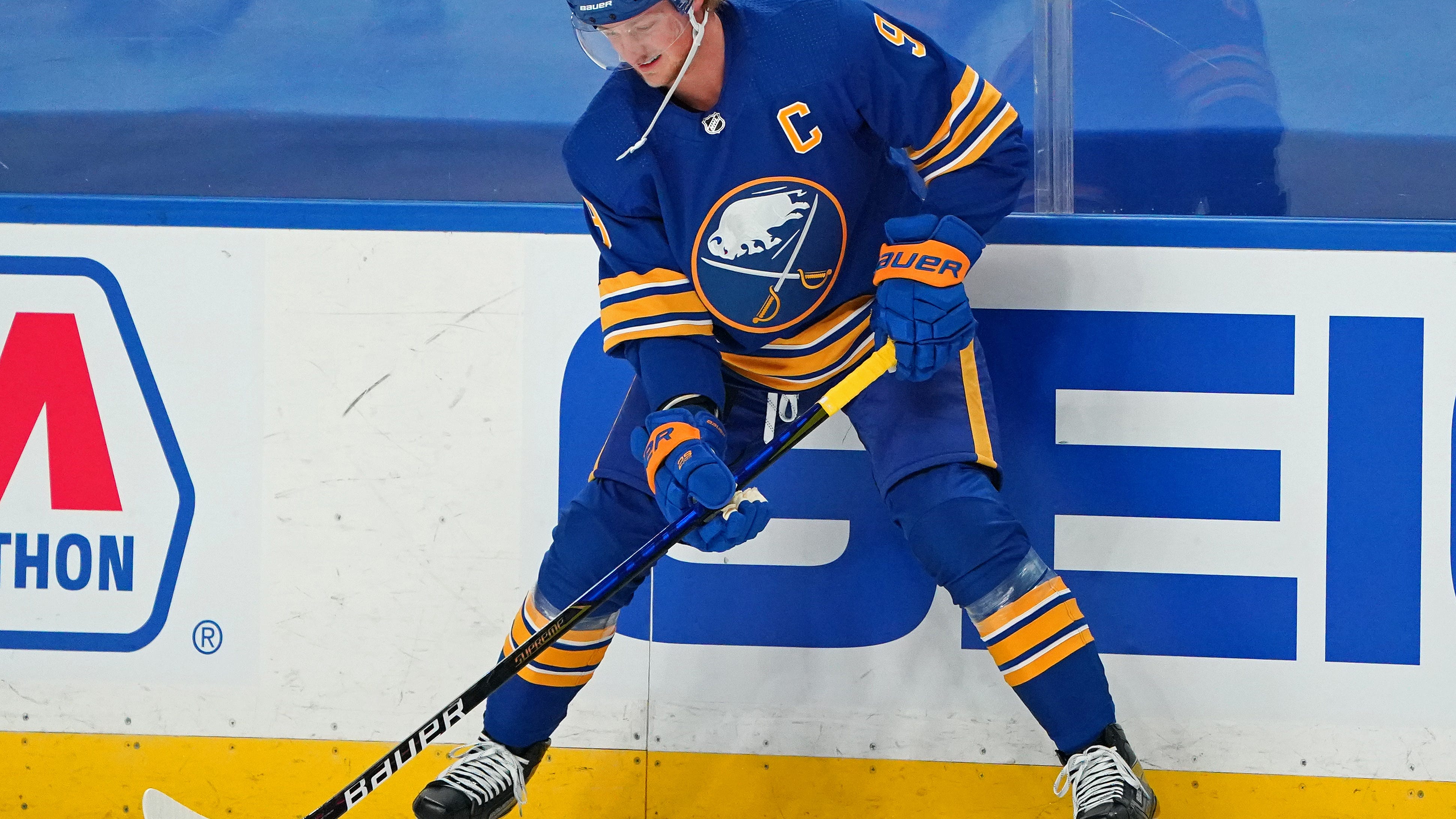