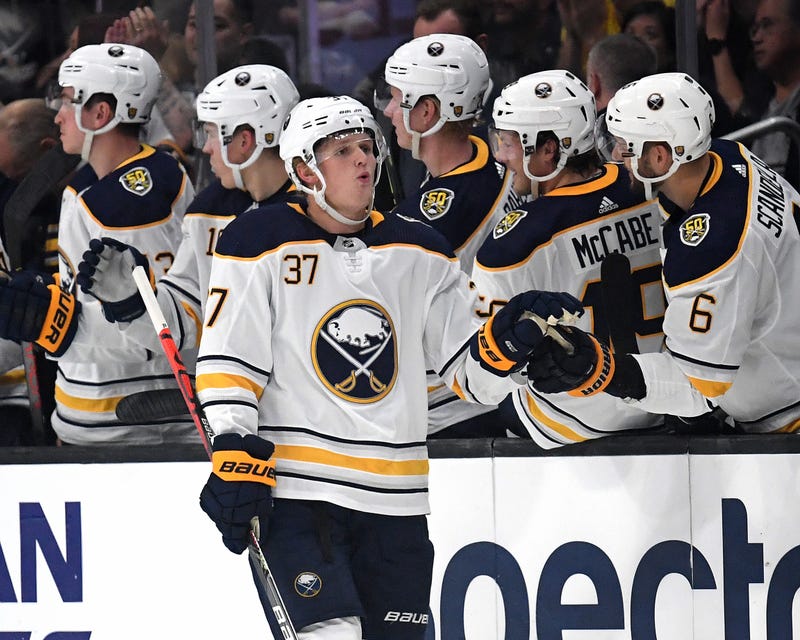 The Buffalo Sabres have their final remaining restricted free agent under contract for the 2020-21 season.

The team announced Wednesday afternoon that it has signed forward Casey Mittelstadt to a one-year contract worth $874,125.

The Sabres have signed forward Casey Mittelstadt to a one-year contract worth $874,125. pic.twitter.com/Lt3VzT4u6B

The 22-year-old has not quite lived up to the hype yet of being the Sabres' first round pick (eighth overall) in the 2017 NHL Draft. In 114 games played with the Sabres over parts of the last three seasons, Mittelstadt has scored 17 goals and registered 22 assists for 39 points.

Last season got off to a slow start for Mittelstadt, who managed just four goals and five assists for nine points in 31 games. However, he started to find himself in-and-out of the lineup before he was assigned to the Rochester Americans on Dec. 15.

When he arrived in Rochester, he struggled to adjust to the AHL game at first, but really started to pick up his game and become a top player on the roster by March. Before the 2019-20 American Hockey League season was shut down and canceled due to the COVID-19 pandemic, Mittelstadt was able to score nine goals and add 16 assists for 25 points in 36 games.

While cracking the NHL roster for the upcoming season is not out of the question, it may be more likely to see Mittelstadt continue to groom his overall game in the AHL for an extended period of time, similar to what Tage Thompson did at the start of last season. However, there are still plenty of questions as to when the 2020-21 AHL season will start, or if the AHL will even be able to play at all with the ongoing COVID-19 pandemic.

Meanwhile, Mittelstadt will likely take part as one of the 36 skaters in training camp with the Sabres starting on Thursday, Dec. 31. However, if he is not selected as one of the 23 rostered players to start the 2020-21 campaign, he may be utilized as one of the 4-6 taxi squad players that will travel and practice with the team.

Mittelstadt will have plenty of players to compete with to earn a roster spot with the Sabres to start the season. Other notable players who will be fighting for a roster spot in Buffalo includes Thompson, Curtis Lazar, Tobias Rieder, Arttu Ruotsalainen, Rasmus Asplund, C.J. Smith, 2019 first round pick Dylan Cozens, and potentially 2020 first round pick Jack Quinn.