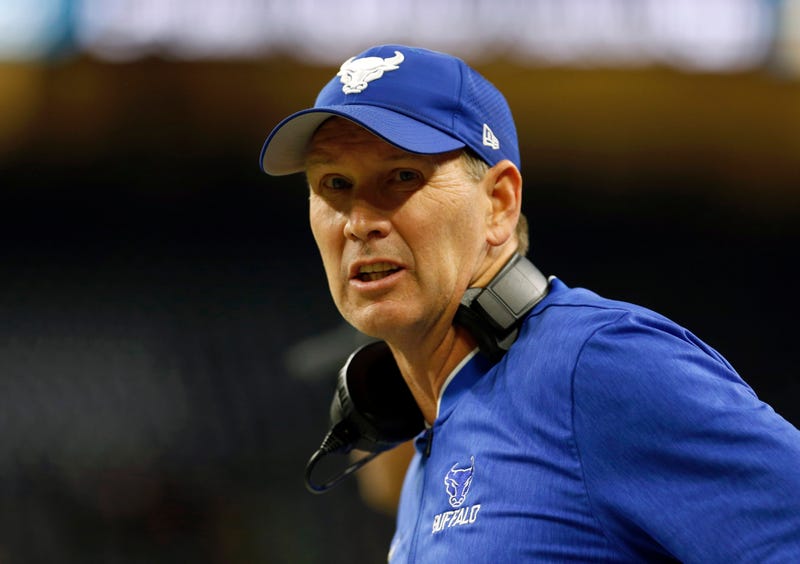 In 1999, the University at Buffalo’s football program re-joined the ranks of Division 1-A, now known as the Football Bowl Subdivision, or FBS.

There wasn’t much to write home about over the following 16 seasons. There was very little winning. There were numerous times fans wondered whether the program should drop back down 1-AA, now the Football Championship Subdivision or FCS.

Then Lance Leipold showed up.

In those 16 years before Leipold became head coach of the Bulls, UB had just two winning seasons, two bowl game berths and one appearance in the Mid-American Conference Championship game.

Leipold is currently overseeing the program’s third-straight winning season, a second trip to the MAC title game and almost assuredly a third-consecutive trip to a bowl game. Instead of wondering where UB could find a head coach who could build a winning team, Bulls fans now hope a Power Five conference program doesn’t come and take their coach away.

If the down-and-out Power Five programs didn’t know about Leipold and his success story in Amherst before, this week’s Associated Press Top-25 poll might tip them off.

The 4-0 Bulls are ranked No. 24 in the country, marking their first national ranking in program history. It's the latest in a growing line of accomplishments for Leipold and company. UB has been the winningest team in conference play since the start of the 2018 season (16-4). If you go by overall records, the Bulls have the most wins of any MAC team (29) since the start of the 2017 season.

Not only do Leipold’s teams win, but they’re high-scoring and fun to watch.

Perhaps you did not know that the Bulls currently lead the nation in scoring, averaging 50.8 points per-game. They put 70 points up on the scoreboard in their most recent win over Kent State.

Building a high-scoring offense is nothing new for Leipold, whose teams the last two years averaged 31 points (46th in FBS) and 34 points (29th) per-game. His teams have also shown the ability to score with different identities. In 2018, quarterback Tyree Jackson and wide receiver Anthony Johnson led a powerful passing attack. In 2019 and again this season, UB is bludgeoning opponents with its running game, led by Jaret Patterson and Kevin Marks.

So how has Leipold been able to turn the football program around?

Better talent and better coaching is the short answer. Better facilities have been a big help too.

It's become a regular occurrence for UB to have a number of players in NFL training camps, and there are a handful playing in the league right now, including cornerback Cam Lewis with the Buffalo Bills. Bulls players have also made appearances in the now defunct Alliance of American Football and the XFL. By raising the level of talent on the roster, Leipold has created better internal competition, and that usually leads to more wins.

UB has been able to stack good recruiting classes as well, so one season of key players graduating won’t lead to a downturn in victories.

Leipold has also been able to put together a good coaching staff. Players come into the program and develop over the course of their careers. When they do lose key players to graduation, in many cases, there isn’t a drop off in the next man up, or next Bull up, in this case.

Take the offensive line for example. UB lost three starters from a group that was one of the best in the nation last season. However, the Bulls have not missed a beat up front. They are second in FBS in rushing, averaging 323 yards per-game, and they have yet to give up a sack in their four games this season.

Keeping a good coaching staff together leads to sustained success. Leipold’s staff is mostly intact from Year 1, and he had a previous relationship with many of his assistants that followed him to Buffalo from Wisconsin-Whitewater (D-III). That group of assistants includes the two key positions on any staff; both offensive coordinator Andy Kotelnicki and defensive coordinator Brian Borland have been working side-by-side with Leipold since he got the job at UB.

When talking to a program insider for some reasons to explain Leipold’s success, he said the biggest compliment he could give Leipold is how much he fights for his players.

He added that it is no coincidence the new field house was built under his watch. In Leipold’s six years on the job, UB’s facilities have been completely transformed. They desperately needed a field house, and the fact that they were the only MAC school without one was an issue when it came to recruiting. In addition to the field house, a lounge and fueling station was added. Last August, they unveiled a state of the art locker room.

As you might suspect, those things matter when you’re competing with fellow MAC schools and other FBS programs for players.

When you win in the MAC, you usually don’t stay in the MAC. Recent coaches who have turned success in this conference into a coaching job at a Power Five program include P.J. Fleck, who went from Western Michigan to Minnesota, and Matt Campbell, who has built a Top-25 team at Iowa State after winning at Toledo. When Northern Illinois had a decade-long run of dominating the MAC they lost Jerry Kill to Minnesota and Dave Doeren to North Carolina State.

This should not make Bulls fans expect an eventual departure of Leipold, but it is almost always a byproduct of being good.

There are exceptions to the rule, though. Frank Solich, who took over at Nebraska after the legendary Tom Osborne, has been at Ohio University since 2005 and his Bobcats are a consistent winner.

Besides, why worry about the future when you can enjoy the present? The present is the best UB Bulls football program in 50 years.