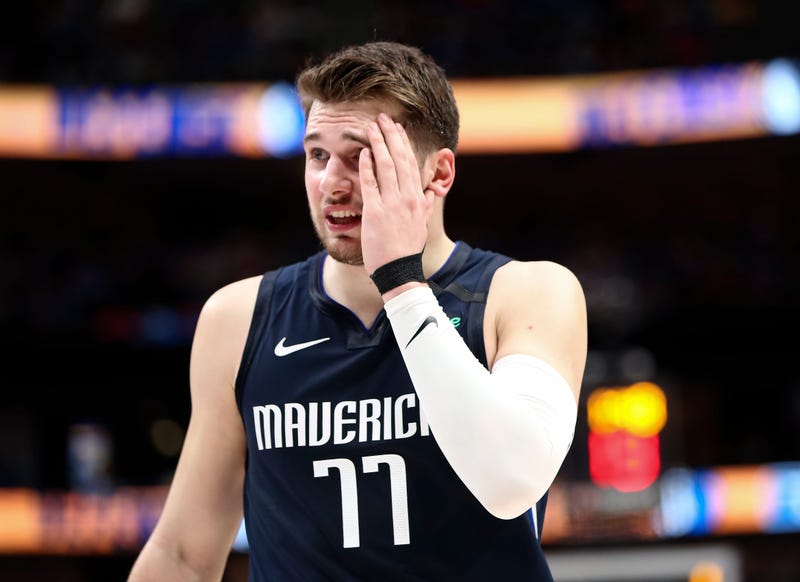 And to think, he was questionable to even play.

After exiting Game 3 with a sprained ankle, Mavericks' superstar Luka Doncic not only played in Game 4 of Dallas' first-round playoff series against the Clippers, he was unstoppable. Down by as many as 21 and without Kristaps Porzingis, Doncic led the Mavs all the way back with a 47-point, 17-rebound, 13-assist triple-double, capped by his step-back three as time expired to stun Los Angeles 135-133.

When you get the Mike Breen double "Bang!" you know you've done something incredible. But how historic was Doncic's Game 4 performance? On multiple levels, very.

Youngest player to hit a buzzer-beater in NBA playoff history Per the Mavericks' PR team, Doncic is the youngest player to hit a game-winning buzzer-beater in league history. Though they've only tracked such stats for about 25 years, it isn't close. Doncic did it at 21 years, 177 days. The previous record-holder was Kevin Martin, who did it at age 23 -- nearly two full years older than Doncic.

The shot heard around the 🌎 today. #dALLasIN #MFFL pic.twitter.com/fp54cs8lu3

Second player to score 40+ and hit a game-winner when trailing in a playoff game. According to ESPN Stats & Information, Doncic put himself in company with His Airness. Before Sunday's game-winner, the only player to score at least 40 points and hit a buzzer-beater when trailing is Michael Jordan, and you may remember the play. That came in 1989 when he hit "The Shot" over Craig Ehlo and the Cavaliers.

Second-longest game-winner in NBA playoff history. There have been 776 game-winning buzzer-beaters in NBA/BAA history (regular season and postseason), according to Basketball-Reference.com. Doncic's 28-footer is the second-longest in playoff history, behind only Damian Lillard's 36-foot dagger that clinched Portland's playoff series against Oklahoma City last year.

It's the first such triple-double of its kind in NBA playoff history. Prior to Sunday, no one had ever scored at least 43 points (Doncic: 47), grabbed at least 17 rebounds and dished out at least 13 assists in a playoff game. In fact, only one person had ever put together such a game in the regular season before Doncic. Wilt Chamberlain did it in March 1968, when he put up 53 points, 32 rebounds and 13 assists against the Lakers.

In postseason history, the only players to have at least 40 points, 15 rebounds and 10 assists in a triple-double were Charles Barkley (1993 Western Conference Finals) and Jerry West (1969 Finals).

The second-highest scoring triple-double in NBA playoff history. The only player to ever score more than Doncic's 47 points in a playoff triple-double is the person Doncic appears to be chasing in modern history for triple-double domination. Russell Westbrook netted 51 points in a Thunder loss to the Rockets in 2017, in addition to 13 assists and 10 rebounds.

Second player to have a 30-point playoff triple-double before age 22. Doncic shattered the record by becoming the first player before age 22 to have a 40-point playoff triple-double. In fact, only one other player had ever had such a performance with 30 points. LeBron James put up 32 points, 11 rebounds and 11 assists in his playoff debut in 2006 against the Wizards.

In addition, Doncic joins LeBron and Magic Johnson as the only players with multiple playoff triple-doubles before turning 22. Doncic (to this point) and LeBron each did it twice. Johnson had five games before age 22.

Luka Dončić is now the 9th player in @NBA history to record consecutive triple-doubles in the playoffs.

Dončić (2) joins Magic Johnson (5) and LeBron James (2) as the only players in league history to record multiple triple-doubles in the playoffs at age 21-or-younger. pic.twitter.com/4ybIZwRW8Q

Ninth player with consecutive playoff triple-doubles. Even though he left Game 3 early with the ankle injury, Doncic still finished with 13 points, 10 rebounds and 10 assists. Obviously his Game 4 performance is slightly more memorable, that Game 3 addition puts him in elite company. Only eight players had ever recorded consecutive triple-doubles in a playoff game before Sunday.