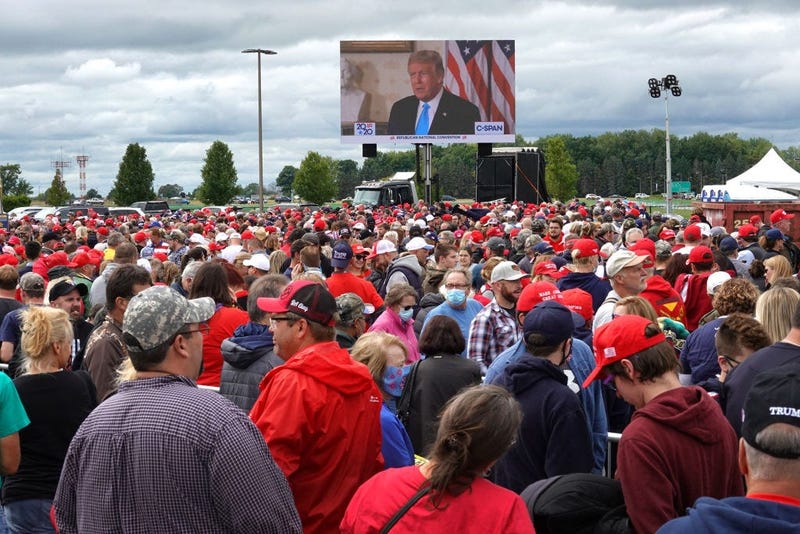 (WWJ) A campaign rally for President Donald Trump in Michigan drew a massive, tightly-packed crowd of supporters -- many without masks.

Reporters on the scene Thursday in Freeland, an unincorporated community in Saginaw County's Tittabawassee Township, counted thousands of people gathered for the indoor/outdoor event at an airport hangar.

“This is not the crowd of a person who comes in second place," President Trump said.

Very little social distancing and not many masks inside crowded airport hangar in Michigan for Trump rally. pic.twitter.com/KcdYmFYQWR

The scene here in Freeland, Michigan just before Trump takes the stage pic.twitter.com/GyExW645hO

Clearly, by looking at photos and video of the event, Michigan's COVID-19 social distancing requirements (6 feet apart) were not being enforced.

NBC News correspondent Garrett Haake said, however attendees were getting their temperatures checked as they arrived.

Hello from Freeland, MI where hundreds await @realDonaldTrump at an indoor/outdoor rally. Attendees have their temp checked as they arrive & masks are free. I’d say 5-10% are wearing masks. Michigan limits any large gathering to 250 people. Trump calls these “peaceful protests.” pic.twitter.com/hO08MBpk2N

Masks are being handed out for free, but there is no mask requirement at the event. "I’d say 5-10% are wearing masks," Haake wrote in a tweet.

While executive orders in place limit gatherings to 100 people throughout most of Michigan, exceptions are made to allow for "political speech."

Earlier in the day, MLive reporter Malachi Barrett said it was a "festive tailgate-like atmosphere" ahead of the event. He later estimated about a quarter of those in attendance at the rally were masked.

A festive tailgate-like atmosphere in Freeland, Michigan with ~8 hours until President Donald Trump is set to hold a rally. pic.twitter.com/IpTSdOd9Y9

While made no move to shut down the rally, Michigan Gov. Gretchen Whitmer wasn't happy it was happening amid the pandemic, according to WWJ's Lansing Bureau Chief Tim Skubick.

"She's saying that he's probably not going to mask up, we're going to have a crowd that won't be masking up and (saying) 'This is very distressing,' Skubick reported.

Michigan, narrowly won by Trump in 2016, in considered an important battleground state in the 2020 presidential election. Trump's opponent, former Vice President Joe Biden, was just in Michigan on a campaign stop Wednesday.

Trump landed at the airport a little after 7 p.m. Thursday to deliver a campaign speech, telling the crowd the upcoming election will be "the most important" in U.S. history.

The president said he is "up in the polls" in Michigan, adding, "If we win, American wins."

Speaking about the COVID-19 pandemic, Trump called it "the China plague," saying China "should never have let it happen." Trump said he thinks a coronavirus vaccine is going to come "very soon." Even without it, he said, "we are around the corner," and "the numbers are plunging."

Taking various swipes at his Democratic opponent, Trump said Biden is "waging war against the middle class." He added, however, that most people in the crowd appeared to be "upper class" or "elite."

"The left wants to get rid of me, so they can come after you," Trump said, going on to list some of  his accomplishments so far as POTUS, including exemplary jobs numbers prior to the pandemic.

He claimed his policies have helped the U.S. auto industry.

"You'd better vote for me," he told Michiganders. "I got you so many car plants."

Trump urged those in the crowd: "Tell your governor to open up your state." He said it would be better if Michigan "had a governor who knew what the hell she was doing," saying he believes Democrat governors shut down their economies "for political reasons."