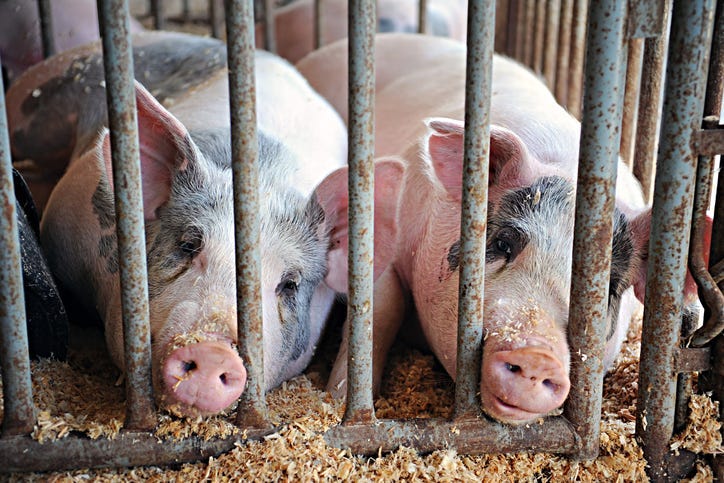 FOWLERVILLE, Mich. (WWJ/AP) - Health officials say swine flu has been detected in pigs at a fair that wrapped up over the weekend in Michigan.

The infected pigs were detected last week at the Fowlerville Family Fair, according to the Livingston County Health Department.

Pigs were removed from the event, which ran July 22-27 in the village of Fowlerville, which is located just north of I-96, west of Howell, and about 65 miles northwest of Detroit.

While no human cases were reported at this year's fair, two people tested positive for Influenza A, commonly known as swine flu, after being exposed to sick pigs at the festival in 2018.

Swine influenza is a respiratory disease in pigs that's caused by type A influenza viruses.

Although relatively rare, human swine flu infection is thought to happen when an infected pig coughs or sneezes and droplets with influenza virus land in someone’s nose or mouth, according to heath officials, or are inhaled. There also is some evidence that the virus might spread by someone touching something that has virus on it and then touching their mouth or nose.

Symptoms of infection are usually mild and similar to those of seasonal flu viruses. But as with seasonal flu, complications can lead to hospitalization and death. Symptoms include fever and respiratory symptoms, such as cough and runny nose, as well as body aches, nausea, vomiting, or diarrhea.

Some populations are at higher risk of developing complications if they get influenza, including children younger than five years of age, people 65 years of age and older, pregnant women, and people with certain long-term health conditions including like asthma, diabetes, heart disease or weakened immune systems.

Below are some steps that you can take to protect yourself and prevent the spread of any illness:

• Anyone who is at high risk of serious flu complications and planning to attend a fair should avoid pigs and swine barns• Do not eat or drink in livestock barns or show rings• Don’t take toys, pacifiers, cups, baby bottles, strollers, or similar items into pig areas• Avoid contact with pigs if you have flu-like symptoms. Wait seven days after your illness started or until you have been without fever for 24 hours without the use of fever-reducing medications, whichever is longer• Avoid close contact with sick people• Cover your nose and mouth with a tissue when you cough or sneeze. Throw the tissue in the trash after you use it• Wash your hands often with soap and water. If soap and water are not available, use an alcohol-based hand rub• Avoid touching your eyes, nose and mouth. Germs spread this way• If you are sick, stay home from work or school until your illness is over

For more about swine flu from the U.S. Centers for Disease Control (CDC), visit this link.