DETROIT (WWJ) -- Detroit Police investigators are renewing their call for tips in a deadly hit-and-run crash last month, on the city's east side.

The 47-year-old victim was driving his motorcycle in the area of E. State Fair and Rowe St., shortly after noon on Oct. 19, when he was struck by a black Jeep Grand Cherokee. 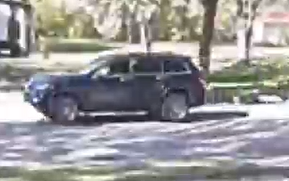 Police said the Jeep involved is at least a few years old, a model between 2014 and 2018, and that vehicle will have front-end damage sustained in the crash.

The suspect fled the scene after hitting and killing the victim, whose name has not been released.

The DPD has released video that shows the Jeep apparently pulling out in front of the motorcyclist, who did not have a stop sign, according to police. A silver SUV, which was not involved, is seen trailing behind the motorcycle at the time of the crash.