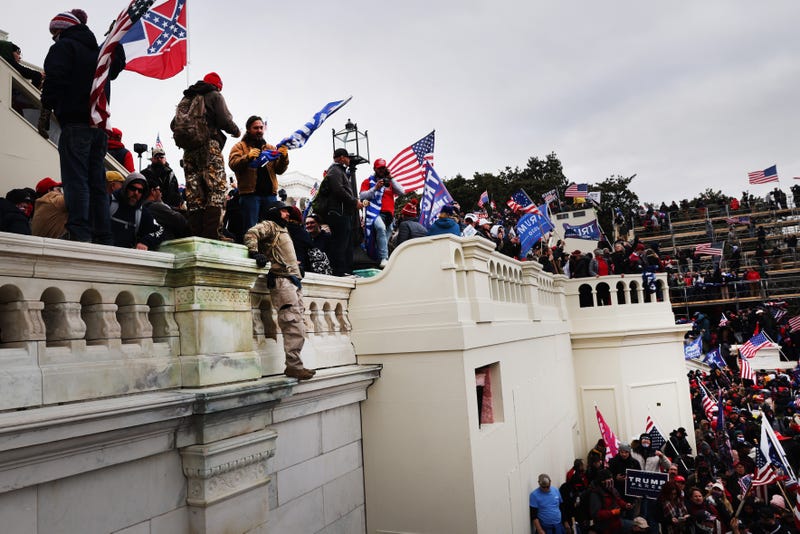 A Minnesota woman was one of several rioters caught on video as they were kicked off flights after being identified as a member of the insurrection at the U.S. Capitol building last week.

One of the women apparently being kicked off this flight identifies herself as “Melody Marie Black,” a Minnesotan captured at Wednesday’s storming of the Capitol.

This seems to be a Delta Connection flight, operated by one of Delta’s regional partners. https://t.co/eMqZWyR5Ik

Melody Black was previously identified as a Trump supporter at rallies in Minnesota. She was forcibly removed from a Delta flight from Washington D.C. to Minneapolis

A few people have pointed out that, Melody Black, a Trump supporter I interviewed in 2019 at a rally in Burnsville, seems to have been a part of the the mob that hit the Capitol.

I couldn't reach her, but she identifies herself, and it's clearly the same person in both videos. https://t.co/o6iv0w9BCc

This is Melody Black, a Trump supporter from Red Wing. She said Muslims were responsible for 911 and that Rep. Omar was part of Hamas...and more! (I'm clumsy, wasn't set up so half of it is off camera, you can hear her though).

There is a perfunctory "fake news" at the end. pic.twitter.com/3JKUgMXN61

Black, was one of many identified as alleged Capitol rioters who were kicked off flights or arrested at airports around the nation this weekend.

When you get back from that DC trip and 12 been watching all them “lives” you posted. #capitolriots #heykaren pic.twitter.com/iY3IBFEmEF

If you haven't checked out the #NoFlyList videos, please do so. pic.twitter.com/vPVeQoCsBF

This is the latest repercussion to face a Capitol rioter. A Chicago woman was fired from her job as a Realtor, and a tattoo artist said his shop was vandalized after it was known he had attended. The man who posted what many saw as arrogant photos of himself with his feet propped up on Nancy Pelosi's desk was arrested as the FBI urges people to come forward with information about others who joined the stampede so they can face charges.

Under an executive order signed by Trump himself, rioters could face 10 years in prison for participating in the event.

Meanwhile, the head of the union for flight attendants is calling for everyone who participated to be banned from flying back to their point of origin. The Washington Post reported that in a statement, Sara Nelson, international president of the Association of Flight Attendants-CWA, condemned the “mob mentality behavior” on flights to the D.C. area on Tuesday that included passengers heckling Sen. Mitt Romney (R-Utah), Lindsay Graham, and getting into shouting matches.

A fight broke out on one American Airlines flight when a passenger projected an image of Donald Trump from his phone into the plane.

music
2021 ACM Awards: Chris Young is going 'zero to 100' when he finally plays ‘Famous Friends’ live
sports
Tom Brady ranks sixth in 2021 MVP odds on 21st anniversary of getting drafted
sports
Hear what Mel Kiper had to say about Tom Brady on the day he was drafted 21 years ago
music
Gwen Stefani shares how being 'naïve' helped 'Don't Speak' connect, 25 years later
music
2021 ACM Awards: Why Dierks Bentley is putting the spotlight on other artists during his performance
music
Watch Lil Nas X help explain coming out of the closet to kids