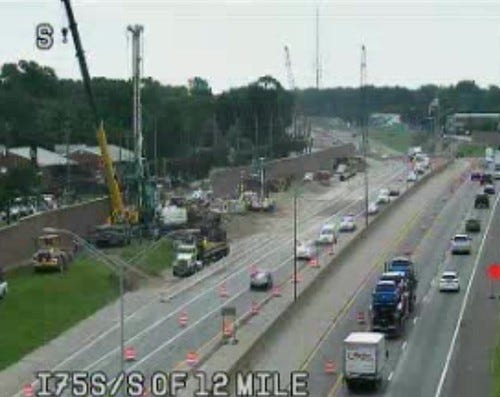 (WWJ) There's good news for drivers who travel I-75 in Oakland County.

Crews have repaired a stretch of the freeway affected by a sinkhole that formed under the service drive and portion of the northbound lanes of I-75, near 11 Mile Rd. in Madison Heights.

One lane of northbound I-75 — which had been completely closed since the sinkhole was discovered last Friday — reopened Tuesday afternoon.

Sinkhole where we started on the left at 3 on Friday & here now after 5:30 on Tuesday afternoon I-75 NB service drive closed near 11 Mile rd I-75 NB btwn I-696 & 12 Mile Rd only the left lane open #DetroitForward & your next update here https://t.co/iEHymE1jSq #TrafficAlert pic.twitter.com/YhmriA0g2j

The eastbound and westbound I-696 ramps to northbound I-75 are also open.

The Michigan Department of Transportation (MDO) said it is hoping to have the center lane open by the end of the week.

Drivers should note that the northbound I-75 service drive remains closed from 11 Mile Road to Gardenia Avenue. There is no estimate on when that section of the Service Drive will reopen.

MDOT said the sinkhole — also referred to as a "void" — appeared when crews were mining for a drainage tunnel under the northbound service drive near 11 1/2 Mile Road. The operation affected the pavement of the northbound lanes and the service drive.

This section of northbound I-75 will be rebuilt in 2022 as part of the I-75 modernization project.

Stay with WWJ Newsradio 950 for the latest updates during traffic and weather on the 8s. LISTEN LIVE.