As the Supreme Court considers allowing stricter right to life laws in the U.S., that begs a question: Does making it harder to get the procedure curtail the number of abortions?

The fundamental assumption that laws prevent abortions is the basis for policy and passionate debate, so the story told by the numbers is important. And that story is as nuanced as it is murky.

The answer emerging from the data and told by experts across the country is that laws don’t affect the numbers equally and across the board. Instead, restrictive laws affect primarily women of color and low-income women.

The story the data tells, with strict laws in places like Texas, Georgia and Louisiana, but middle-of-the road abortion numbers, show that many more factors beyond the law come into play.

In some states, like West Virginia, strict laws and low numbers of abortion go hand-in-hand. Similarly, New York and California, with easy access, have some of the highest numbers.

But the more nuanced tale plays out in places like Georgia, which bucks the trend of strict laws forcing the lowest numbers. Texas now has the strictest laws in the country – including a six-week abortion ban and  a ban on medical abortions after seven weeks of pregnancy as of Dec. 2 – but more than twice the rate of procedures of its red state compatriots in Kentucky and West Virginia. Louisiana has a similar trend.

“In the past decade we have seen Texas politicians drastically undermine access to abortion care. As you may recall, in 2013 when the number of Texas abortion clinics went from over 40 to under 20 due to regulations that were ultimately struck down, and now when the six-week abortion ban barred most abortions,” said state policy expert Elizabeth Nash of the Guttmacher Instiutue, a Pro-Choice research organization.

In December, the Supreme Court heard arguments in the Dobbs vs. Jackson Women's Health Organization case regarding that single clinic in Mississippi. The conservative-leaning court is expected to decide this year whether the state’s post 15-week abortion ban is constitutional, a move that could conflict with the landmark 1973 Roe vs. Wade case, which allows for abortions up to the point of viability, typically occurring at 24 weeks.

And then news dropped this week that an opinion has been drafted in the Supreme Court that would overturn Roe v. Wade and potentially let states decide abortion law on their own. 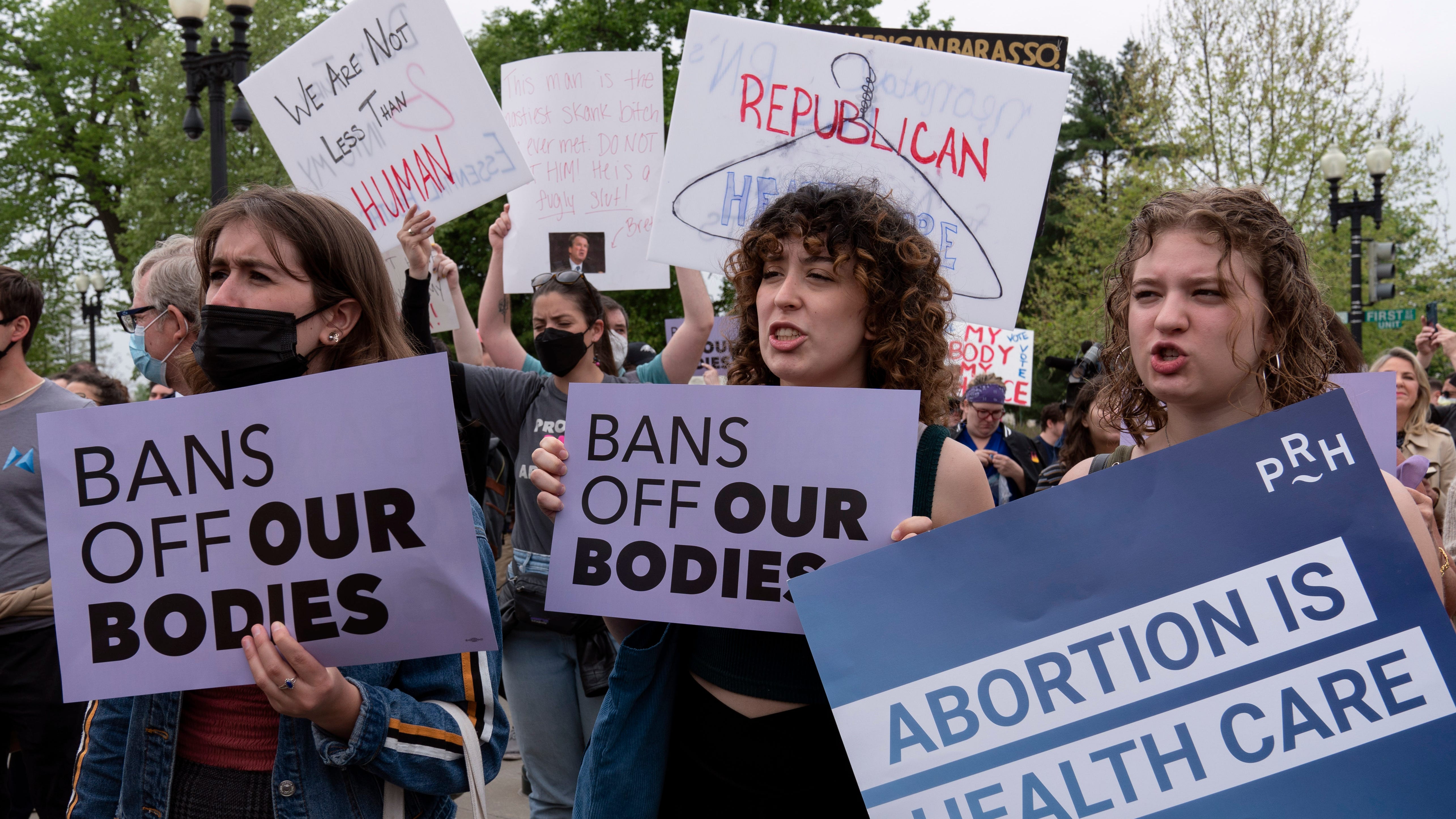 As Laurie Betram-Roberts, executive director of the Mississippi Reproductive Freedom Fund said, residents in states with strict abortion laws already have to clear hurdles to get the procedure. Laws basically make it difficult for poor women without resources to get the procedure, while experts say women with access to transportation and enough money to pay for the procedure … just cross state lines if they have to.

“Most of the people who we assist are driving an hour to three hours to their appointments,” she said. “So, that means two to six hours round-trip, and you have to make that trip twice unless you can stay the night and get your procedure the next day.”

Abortion restrictions do sometimes -- but not always -- prevent people seeking abortions from getting them, she said.

“I am one of those women,” said Bertram Roberts, who is now a mother of seven. “It’s hard.”

When she found out she was pregnant at a time when she wasn’t ready, Bertram Roberts was at a loss, she told the Connect The Dots podcast.

“I didn’t deal well. I tried to self-abort and it didn’t happen,” she said. “I just kept living my life like I wasn’t pregnant.”

The year after her child was born, Bertram Roberts ended up homeless.

“There are consequences to having a child you are not economically, emotionally, physically ready for,” she said.

Half of all women in the U.S. who got an abortion in 2014 lived in poverty, according to a 2016 study by the Guttmacher Institute, a reproductive health research group. Texas health data shows that Black patients accounted for about 30% of Texas abortions in 2020, though 12% of the state’s population is Black.

While the most recent CDC abortion surveillance data released in November shows that, in most cases, states such as Mississippi with severely restricted access to abortions have lower rates of abortion overall, that actually isn’t always the case.

Gretchen Ely – a professor and PhD program director at The University of Tennessee, Knoxville, who researches abortion – explained that the impact of restricted access to the procedure is complex.

“It is true that these laws likely stop some people from getting abortions because the laws create barriers that disadvantaged people may be unable to overcome,” she told Audacy. “This historically disproportionately affects poor women, as those who have economic means can afford to circumnavigate the restrictions by traveling. However, research suggests that, overall, rates of abortion tend to be similar across regions, independent of legal restrictions.”

According to Ely, the type of restriction can impact when and where people seek to terminate their pregnancy.

Planned Parenthood identifies a variety of restrictions to determine whether states have accessible abortions, which include: bans on the number of weeks into the pregnancy when an abortion can be performed, insurance restrictions, parental consent mandates and waiting periods. Bertram Roberts said other “trap” laws such as regulations on the width of hallways and the length of grass outside clinics can impact access.

As of October, 26 states also had “trigger” laws that would likely result in abortion bans if Roe vs. Wade is overturned, according to the Guttmacher Institute. Missouri and Louisiana – two states where abortion access is already restricted – are on the list.

According to the recent CDC abortion data, Missouri has one of the lowest rates of abortion per live births in the country, 20 per 1,000. Louisiana’s rate is much higher at 138 abortions per 1,000 live births.

Data also shows that there were 87 abortions per every 1,000 live births in Mississippi during 2019. The least abortions per 1,000 (5) were in Wyoming, where abortion is severely restricted. Other data from the Guttmacher Institute and the Kaiser Family Foundation showed that Maryland, where abortions are accessible, had the most (415).

People in the U.S. may not seek the procedure often where there is little access, but they do travel to nearby states where it is accessible. For example, according the CDC data, more than 16 percent of abortions in Illinois are obtained by out of state residents.

Amy Gherke, executive director of Illinois Right to Life, a Pro-Life organization, called the state “basically a haven of abortion extremism, right in the middle of the country.”

Based on data from the Guttmacher Institute compiled by Planned Parenthood, Illinois laws make abortion more accessible in the state compared to any state that borders it. Vermont, another state where abortions are accessible, also has a high rate of out-of-state abortion procedures at 22 percent, as does New Mexico at close to 24 percent.

Some doctors from states with accessible abortions even travel to states with restrictive laws to perform the procedure. According to a report in The Washington Post, New York physician Meera Shah travels to South Bend, Ind., every month to perform abortions.

“The commute is exhausting, of course, but I’ve seen firsthand how this care is so important to a patient’s autonomy over their own body,” Shah told the outlet.

Yet, some states with more restrictive laws than New York, New Mexico, Vermont and Illinois have even higher rates of out-of-state people arriving to terminate pregnancies.

Despite having some of the most severe abortion restrictions in the country, Georgia also had the fourth highest number of abortions per 1,000 live births at 292.

So, why would some states with restrictive access to abortion draw out-of-state patients or have high rates of abortion?

For Georgia and Florida -- states with both restricted access to abortions and some of the highest numbers of abortions per 1,000 live births -- being home to large cities may be why numbers are high, said Ely.

“States with regressive abortion laws tend to also be states where general health care services, including Medicaid, comprehensive sexuality education, and contraceptive services, are also difficult to access,” Ely also said. “If a person has difficulty accessing the contraceptive care that are needed to prevent pregnancy and/or the person is not fully informed about how to avoid unintended pregnancy,” they are more likely to get pregnant and thus seek abortions.

Heidi Sieck, an abortion advocate and founder of the Vote Pro-Choice political organization, recently told Audacy’s Connect the Dots podcast how this lack of access shaped the lives of her mother and grandmother.

“My mother and my grandmother did not have access to reproductive health care,” she said. Her grandmother, a parent of four, shared with Sieck on her death bed that she had received an illegal abortion. The admission was filled with guilt and shame, she said.

By 1971, the year Sieck was conceived, her mother still didn’t have access to comprehensive sexuality education or birth control.

“They made a lot of difficult decisions for themselves when I was born that weren’t authentic to who they were, and there was a lot of complexity and pain in that for them, and for me,” she said of her parents.

When Sieck had her own abortion, she was able to easily access the procedure  in California. She wants that option to be available for everyone.

“Most people who get abortions in the U.S. are single young women in their early 20s who are already parenting at least one child,” said Ely. According to Sieck, one in four women of childbearing age who can get pregnant has had an abortion, two thirds of those people were already parents and 87 percent said they did not regret their choice.

Ely explained that economic difficulties are one of the main reasons why women choose not to go forward with an unintended pregnancy.

“These difficulties could include: a lack of access to childcare, unstable or abusive partnerships, wanting to use available resources to support existing children, lack of access to affordable housing/homelessness, and unemployment or underemployment,” Ely explained.

Some Pro-Life organizations offer support to people facing challenges around unintended pregnancies. For example, Illinois Right to Life offers applicants who “go through a rigorous application process,” the opportunity to receive a one-time $1,000 grant through its Project Love program.

However, as Ely explained, the economic reality of having a child can impact entire families and some find the burden is too much.

According to The Atlantic, it cost more than $4,500 to give birth in a hospital last year. Based on the most recent USDA Consumer Expenditures Survey conducted in 2015, a middle class two-income family was expected to spend $12,980 annually per child. Recent inflation has likely made that figure higher.

“It can sometimes take weeks or even months or more to recover from these extensive expenses when someone is already economically disadvantaged,” said Ely. “These kinds of barriers tend to disproportionately negatively impact people of color, people who are younger, people living below the poverty threshold, and people living in Appalachia and other rural areas.”

Even if Roe vs. Wade is upended by the court’s decision next year, states such as Illinois and New York, where laws make abortion accessible, can keep those laws in place.

Bertram Roberts believes the end of Roe vs. Wade would force abortions to move instead of eliminating them.

“It doesn’t matter where you live, those people have to go somewhere,” she said. “Which means, they’re going to flood into your states for abortions,” if they live in states where the procedure is inaccessible.

Ely’s research has led her to a similar conclusion.

“These restrictions, again, may not keep someone from getting an abortion, but they can cause people to have to use up more of their resources, which can harm both the patients and their children,” she said.