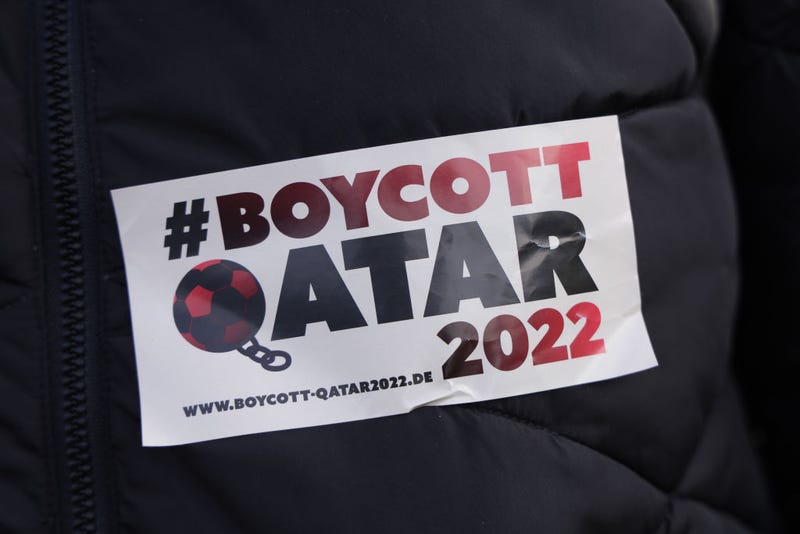 Sporting events are no stranger to protests, whether it be Black Power fists raised at the Olympics or players kneeling rather than standing for national anthems.

Now it’s the 2022 FIFA World Cup that is becoming ground zero for a number of different movements looking to publicize their plights, sometimes in ways that violate the rules.

Mario Ferri, 35, was arrested by officials in Qatar when he ran onto the field during the second half of Monday’s match between Portugal and Uruguay. Ferri was waving a flag and wearing a shirt that looked to draw attention to two different causes.

Across the front, the shirt read, “Save Ukraine.” On the back, it read, “Respect for Iranian Women.”

Ukraine of course has been defending itself against a Russian invasion for months that has seen scores of civilians killed along with Ukrainian troops.

As for Iran, the country has been embroiled in protests since the September death of Mahsa Amini, 22, who died while being held in custody by the Iranian morality police. Amini, who was a member of the nation’s Kurdish minority, was arrested for wearing “inappropriate dress.”

Hundreds of thousands of Iranians have taken to the country’s streets to protest in favor of granting more rights to women, with many calling for a change to the authoritarian regime that has held power for over 40 years, since the 1979 Islamic Revolution.

The Qatari Supreme Committee said in a statement Tuesday that, while Ferri’s trespass on the field warranted criminal charges, he will not be charged. He was deported from Qatar however and banned from attending future World Cup matches.

Meanwhile, amid reports that Qatari officials were denying spectators the right to wear rainbow colors and seizing pro-LGBTQ and pro-women signs, FIFA is now assuring the public that those items will be allowed in.

“FIFA is aware of some incidents where permitted items were not allowed to be displayed at stadiums,” soccer’s governing body said in a statement. “FIFA has received assurances by authorities that venue commanders have been contacted in relation to the agreed rules and regulations for the FIFA World Cup Qatar 2022.”

The deeply conservative Qatari government has already reneged on an agreement to allow alcohol to be served and advertised on event grounds in conjunction with the event, removing tents emblazoned with Budweiser’s logo, an official sponsor of the event.