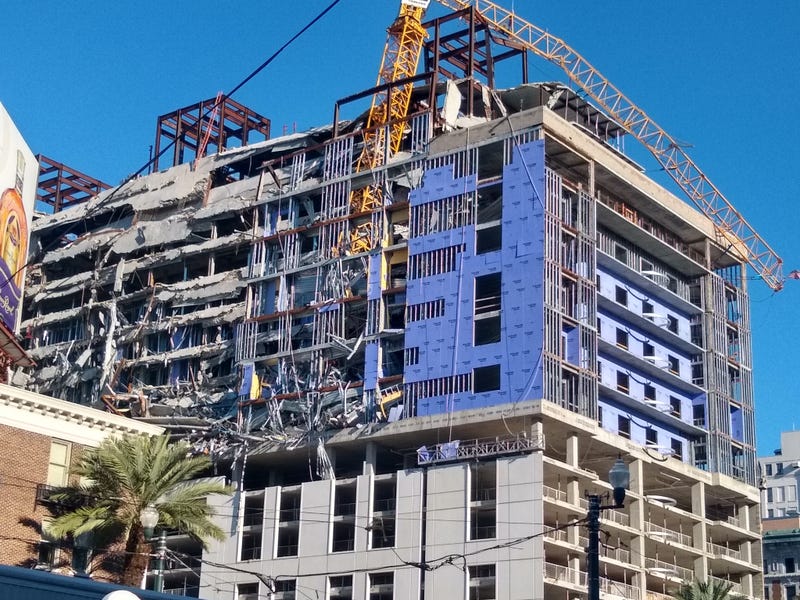 The City of New Orleans suspends two city building inspectors for not doing their job by inspecting buildings and falsifying inspection records.

Inspectors Julie Tweeter and Eric Treadaway were suspended for 30 days without pay for filing false reports saying they inspected locations when GPS data and other evidence suggests they were nowhere near those locations.

One location claimed to be inspected by them was the Hard Rock Hotel construction site in the months before the partial collapse in October, which killed three workers.

WWLTV’s Eyewitness Investigator, David Hammer, talks with WWL First News about a secret recording of an emergency meeting among inspectors and building officials for the city back in September.

“And that (meeting) is less than a month before the hotel would collapse,” Hammer told WWL Radio’s, Tommy Tuck. “They aren’t talking specifically about the hotel, but they are talking about all kinds of problems in their office regarding inspectors not really doing the inspections, falsifying documents things like that. So, they are trying to address the issue.”

Hammer says in that meeting, city official Larry Chan confronts his inspectors for not using an inspection app, which sends pictures and data from inspectors directly to his office. “And then Terry Willis who is the chief building inspector at the time comes in and says ‘hey you better fess-up now if you don’t use this app because I can tell from my computer system if you are or you aren’t and time to get with the program here’.”

Hammer continues, “And then less than a month later a building where several inspectors, most prominently Julie Tweeter because she did most of the inspections, files reports saying I (Julie Tweeter) was there and 'I' saw it and everything looks good to go ahead and pour those top floors but GPS data shows she was nowhere near the site.”