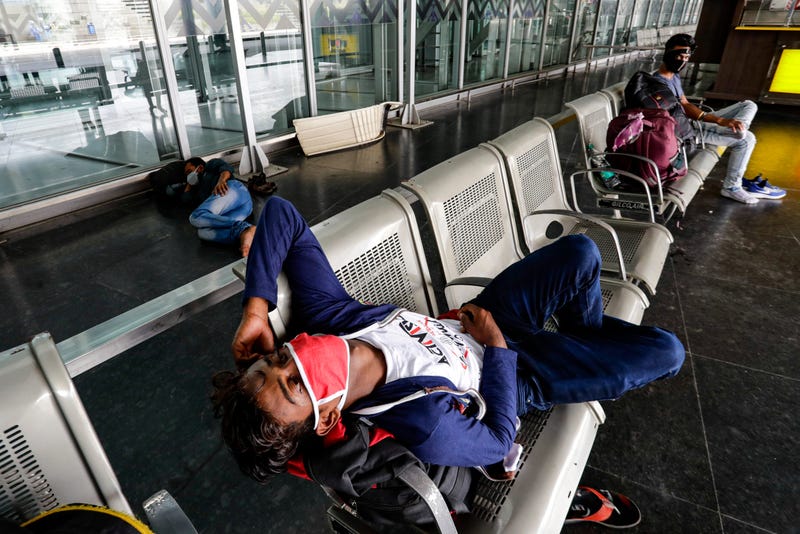 Photo credit Stranded passengers sleep outside an airport during lockdown in Kolkata, India, Friday, Sept. 11, 2020. By early May, 6.4 million people in India were likely infected by the coronavirus, said a study released Thursday, Sept. 10, by Indian scientists from the Indian Council of Medical Research, India’s apex medical research body and published in their in-house medical journal. At the time, India had detected around 35,000 cases and over a thousand deaths. But the results of India’s first nationwide study of prevailing infections in the country found that for every confirmed case that detected in May, authorities were missing between 82 and 130 infections. The study tested 28,000 people for proteins produced in response to the virus in the villages and towns across 70 districts in 21 Indian states between May 11 to June 14. (AP Photo/Bikas Das)
By The Associated Press

LONDON — An app to help to contain the spread of the coronavirus will finally be launched in England and Wales on Sept. 24, months later than the British government had hoped.

The Department of Health and Social Care said in a statement that trials in the London district of Newham and on the Isle of Wight, off the southern coast of England, had shown that the app is “highly effective when used alongside traditional contact tracing to identify contacts of those who have tested positive for coronavirus.”

Health Secretary Matt Hancock described the app’s launch as “a defining moment” and said it will help to contain the virus “at a critical time.”

Businesses including pubs, restaurants, hairdressers and cinemas are being urged to download and print a poster with the special scanning code. Customers can then scan the app on their smartphones on arrival at various venues.

The app was once touted as a game-changer, but it has been beset by problems partly linked to conflicting smartphone networks.

The other U.K. nations, Scotland and Northern Ireland, have launched their own separate apps.

HERE’S WHAT YOU NEED TO KNOW ABOUT THE VIRUS OUTBREAK

— Schools that are mostly Black, Latino favor starting online, which could worsen inequalities in education

— In Peru, where virus has been particularly deadly, Indigenous people turn to ancestral remedies

PESHAWAR, Pakistan — Pakistani authorities have announced the shutdown of a 250-bed COVID-19 hospital which was set up months ago in the country’s northwest amid increasing fatalities and infections from the coronavirus.

The medical facility for handling COVID-19 patients was set up at Lady Reading Hospital in the city of Peshawar after Pakistan reported its first confirmed case in February.

He said currently they had only nine COVID-19 patients who will be moved to a new 25-bed ward at the hospital.

Other hospitals in Pakistan also plan to convert special COVID-19 wards of hospitals into other medical facilities.

The announcement comes hours after the government reported one of the fewest five fatalities from COVID-19 in the past 24 hours, raising hopes that Pakistan is on the right path to fully containing the new virus despite having a fragile health system.

PRAGUE — The number of people infected with the coronavirus is surging in the Czech Republic, setting a record for the second time this week.