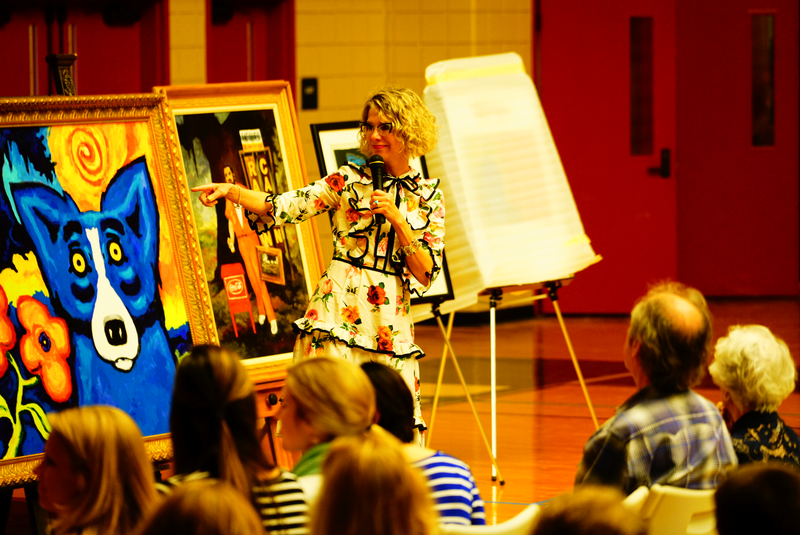 George Rodrigue, the legendary artist who created the Blue Dog paintings, passed in 2013; but his legacy lives on.  Wendy Rodrigue, his widow, created the George Rodrigue Life and Legacy Tour in 2017 to inspire people of all ages.  One of the major parts of the tour focuses on reaching young people.

“[I] cooked up this idea to bring original museum quality paintings into the schools and visit with students about them,” Rodrigue said in an interview with Monica Pierre.

Since its founding, the tour has visited over 60 schools and reached more than 30,000 students.

“George and I visited hundreds of schools together, all over the world as a matter of fact.  After he passed away, I was lost for a long time,” she said. “When I decided to come back into things, I thought, ‘maybe the best way to ease back into life…is through the school, the education outreach that we did.’”

The tour features works from George Rodrigue’s personal collection, and Wendy Rodrigue shared a story that often resonates with the students.

“I explain to them that there was no art in George’s school.  By the time he was in the 3rd grade, he had never seen paintings; and, in fact, the very first painting he ever saw was his own,” she explained.  “He actually discovered art when he had polio.  He was very ill as a child [but he] fully recovered.  They grasp that, kids do.  It gets scary being sick, and you’re bored and all those things.  They find it very inspiring that the thing that put him on his life’s path happened while he was ill and in a bad place; and instead it became something wonderful, and not just wonderful for him but wonderful for others as well, a gift to the world, really.”