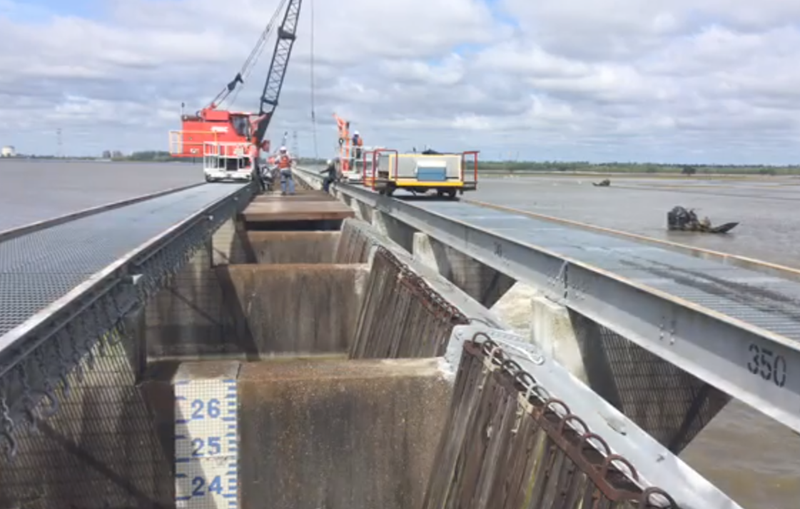 After a record 79 consecutive days of operation, the U.S. Army Corps of Engineers completely closed the Bonnet Carré spillway Saturday. The Corps announced the closure today in a post to its Twitter account.

The Bonnet Carre spillway was completely closed as of Saturday, July 27th#2019Floodfight

The Corps opened the spillway for an unprecedented second time in the same flood season on May 10. It followed a 44-day opening from Feb. 27 - April 11. Heavy rains across both the Ohio and Mississippi valleys prompted the flooding that led to the spillway openings.

Nutrient-rich river water flowed for a total of 123 days out of the river and into Lake Pontchartrain. The fresh water displaced the usually brackish lake water, and officials in Mississippi say it spread to Mississippi Sound, causing blooms of toxic algae in both the sound and the lake.

The excess fresh water also led to an abundance of midges, non-biting flies that look a lot like mosquitoes. Although they don't bite, they did swarm in numbers dense enough to coat the windshields of vehicles traveling across the Lake Pontchartrain Causeway.

Here is more information from a Corps news release:

Water levels along the Mississippi River have dropped prompting the U.S. Army Corps of Engineers, New Orleans District to move from Phase II to Phase I Flood Fight procedures.
This Flood Fight began in late October 2018 when the Mississippi River rose above 11 feet at the Carrollton Gage, and in February, Phase II was initiated when the river exceeded 15 feet. Today the river at the Carrollton Gage was 14.68 feet returning the Flood Fight to Phase I. Current forecasts show the river steadily falling to below 11 feet over the next 28-days.  However, the corps will continue to monitor the river closely and take measures if necessary.
Phase I Flood Fight consist of working with local levee authorities to closely monitor the levees along the Mississippi River. Inspections on the Mississippi River levees from Baton Rouge and below on the east bank and Donaldsonville and below on the west bank will continue twice weekly until the water level drops below 11 feet at the Carrollton Gage.
Flood Fight is a proactive measure that is triggered when the Mississippi River rises above 11. The increased patrols help to ensure that the Army Corps can respond quickly to any problem areas that develop along the levee system because of the elevated water levels.
Levee restrictions during high water
The Army Corps and State of Louisiana have established allowable distances for certain types of work that can adversely affect the integrity of the federal levees and structures. All work that may impact Mississippi River and Tributaries (MR&T) levees, which includes transport of heavy loads over the levee, disturbance of grass cover, or subsurface work within 1,500 feet of the levee, is prohibited when the Mississippi River is higher than 11 feet at the Carrollton gauge in New Orleans. Waivers are considered on a case-by-case basis and are dependent on many factors, including surrounding subsurface ground conditions.
Permit holders are advised to contact their local levee districts for detailed information regarding their projects and to monitor river stages and forecasts by calling 504-862-2461 or by visiting www.rivergages.com.