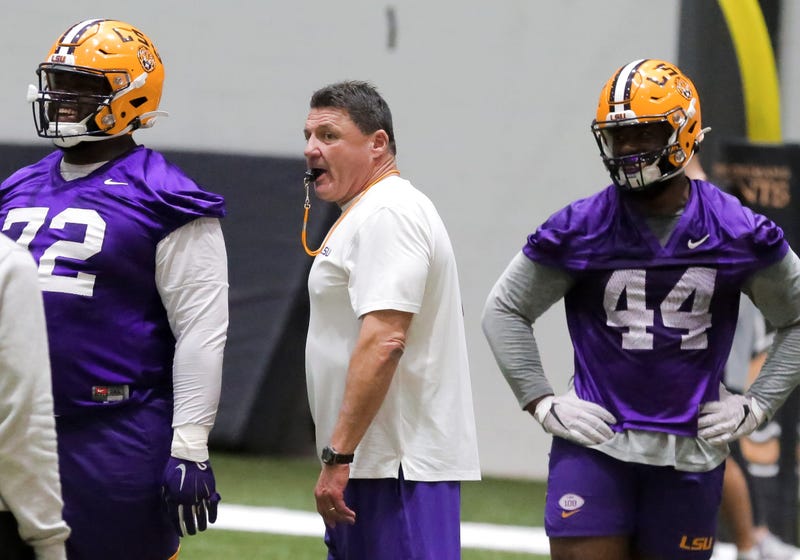 LSU football coach Ed Orgeron said Tuesday morning there are other players on the Tigers’ roster who are considering opting out of the 2020 season.

“There’s a couple of guys thinking about it,” Orgeron said on his weekly Zoom media teleconference. “Hopefully, they don’t (opt out). But we have depth. And if they do, we’re still going to have a great football team.”

So far, LSU has had four players – all projected starters – decide to skip the season. Wide receiver Ja’Marr Chase, nose tackle Tyler Shelvin and safety Kary Vincent Jr. quit to prepare for the 2021 NFL Draft. Defensive end Neil Farrell said he will return next year but is skipping this season because of the coronavirus.

Orgeron said he thought Shelvin should have stayed at LSU for one more season.

“I talked his grandma, his momma and daddy and his mentors,” Orgeron said. “I thought he could stay here and be a dominant football player.

“He’s 375 pounds and I think the best weight for Tyler is 330. I love him like a son. He made that decision. I told him, `Get your weight down to 330, make sure you’re in shape and go have one heckuva NFL career and make us proud.’”

The Tigers have lost 33 players from last season’s national championship team via the NFL Draft, graduation, transfers, dismissals and opting out. Included are nine offensive starters and seven defensive starters.

“It’s going to happen to a championship team. . .next man up,” Orgeron said. “That’s why you gotta recruit. You have some good young players who can play.”

“The best thing is to take it one day a time. This is the team we have. Let’s get them better and let’s see what’s going to happen.”