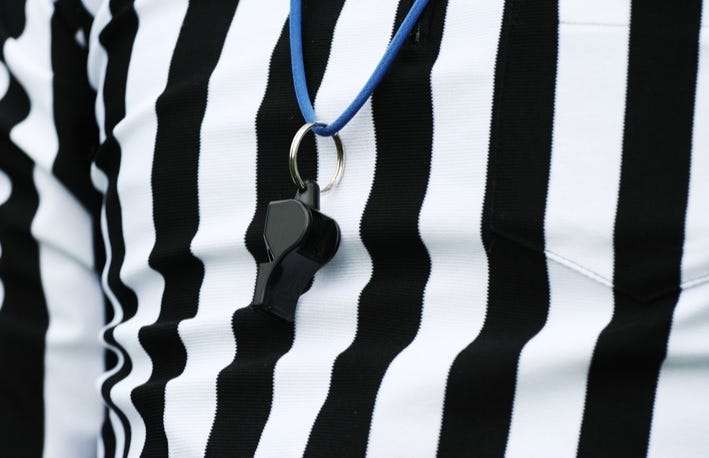 After the No-Call in the NOLA game, the NFL world is talking about solutions.  How do we prevent that from happening again?  What’s the solution?  Should we expand replay?  Have a central office monitoring calls or in this case no calls?   What is the fix…or fixes?

Brandon Lang, a sports handicapper, had an interesting plane ride with a current NFL official about how they can improve officiating.  Surprisingly his name is Bill Vinovich.  Yep…that guy.  The guy that was the white hat in charge during the Saints vs. Rams NFC Championship game.

On Sports Talk Lang told me the solution is adding another official on the field. And, apparently that potential solution was corroborated by “you know who.”  “He (Vinovich) told me they need an eighth official.   They’ve talked about it, but they don’t know where to put him.  The game has gotten so fast for them they need an eighth official.”  Lang recounted the conversation he had with Vinovich on a plane ride back from a Jaguars game.  Saints fans aren’t in the mood for a solution right now, but it would make sense to add an eighth official in an effort to slow down the game for the referees.

Allow me to put this into context.  I spent nine seasons on an NFL sideline reporter covering the Saints.  In the stands you really don’t gain an appreciation for how fast this game is and powerful these players are.  When you watch at ground level, its mind blowing…the speed of the game…and impact.  There were moments during the nine years on the sideline I didn’t even see what happened, because it happened so quickly!  And, every play you hear the powerful, bone crunching hits.  The idea of putting an eighth official on the field is a good step, but I also don’t think you can entirely dismiss replay expansion.
Listen to the interview with handicapper Brandon Lang.  He shares some interesting insights: