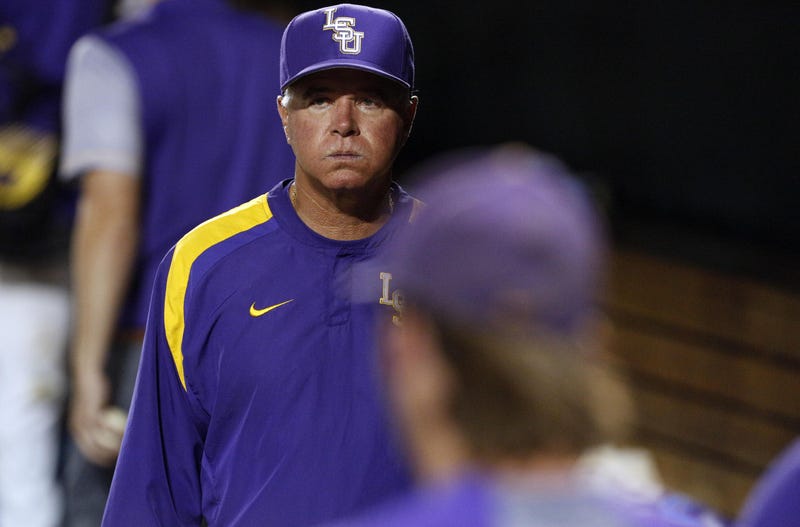 The LSU baseball Tigers are going to look back at this series against South Carolina as their missed opportunity to get back into the SEC race. The Tigers took game one of the series Thursday night 5-1. Rain forced South Carolina and LSU to play two 7 inning games Saturday.

In game two LSU had a 2-0 lead headed into the last inning. Pitcher AJ Labas was brilliant through the first six innings. I can understand why coach Paul Mainieri left him on the bump to finish. Then, Labas gives up back to back singles. Right hander Devin Fontenot comes on and records an out, then gives up a two run double to right, after the ball caught the wind and made for a very difficult play for right fielder Dylan Crews.

An hour later at the start of game three, South Carolina sat in wait, and then executed an ambush on LSU. SC pounded out 14 hits and scored 9 runs on their way to an easy 9-0 win over the Tigers and a series win. Shame. Shame. Shame. LSU had just five hits in the loss.

LSU was two outs away from winning the series, and once again their bullpen let them down. Heck, who knows, in doubleheaders momentum is everything. If the Tigers managed to win game two, "uncle mo" (momentum) might have carried them to a possible sweep of the Gamecocks. Instead they are probably wondering how this dizzying series loss happened.

The LSU Baseball Tigers are now 4 and 11 in the SEC at the halfway point of conference play. Yikes! So if they won game two, the Tigers would have been 5 and 10. That's a big difference. BIG! What if LSU would have pulled off the sweep? They would be sitting at 6 and 9 in the SEC. MASSIVE difference! Woulda. Coulda. Shoulda. The Tigers have to wear this one! You are what your record says you are, and frankly the record says LSU isn't very good.

If you extrapolate the 4 wins and 11 losses over the first fifteen conference games, that would land LSU at 8 and 22 at the end of SEC play.  At that point you aren't even sniffing the post-season and you likely won't even sniff the conference tournament.  If LSU finished with just 8 wins in the SEC, every conversation about the future of the program is up for grabs and fair to question.  Don't write the eulogy just yet for LSU baseball, but you can begin work on the rough draft.  Start with this line:  The Tigers just don't have enough moxie!

I might be a little harsh on the team, but it's all fair now. 4 and 11 is just unacceptable in Baton Rouge. When I say team, I include skipper Paul Mainieri. They can no longer say this is a young LSU Baseball team; they've played half of their conference games.

We're entering late April! NO excuses the rest of the way.