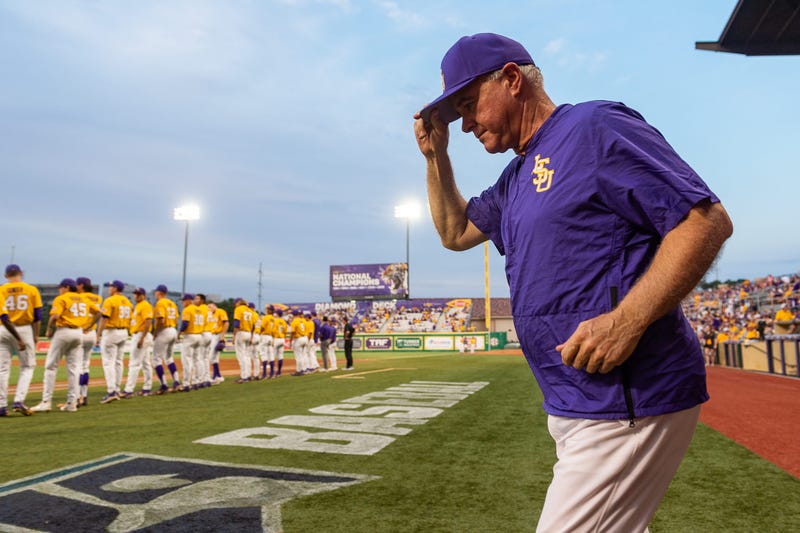 The LSU baseball Tigers are still in the mix for a playoff spot, after beating Auburn this weekend two out of three games. LSU sits at 9-15 in the conference with six SEC games remaining.

The math is very simple, if LSU wins the remaining two series against Alabama, and Texas A&M that would put them at 13 SEC wins. That coupled with the fact that the Tigers’ RPI (a fancy way to say strength of schedule) is the highest the country. 13 wins in the conference and the highest RPI in the country should be enough to get the Tigers in a regional somewhere.

If LSU were to sweep one of the two remaining series, LSU would pretty much be a sure fire lock to make the post-season with 14 conference victories. With 13 wins, the Tigers would want to add some insurance with a win or two in the SEC tournament at the end of this month.

If Paul Mainieri's Tigers don't qualify for the NCAA baseball tournament, they can look back to a couple of series that cost them. Take this past weekend for example. LSU had the opportunity to sweep Auburn and couldn't get it done. They also had the chance to sweep Ole Miss weekend before last, but blew an 8 run lead in the series finale. The Tigers could have swept Kentucky in early April but instead lost game three of that series.

The bottom line is LSU lacked that that killer instinct to finish off teams. They hope those three opportunities don't cost them a spot in the playoffs. The Tigers are 2 and 4 in SEC play in games decided by two runs or less. That might be all you need to know about this LSU baseball team.

The next two weekends are the season for the Bayou Bengals. If they have any hopes of playing in the first week of June, the Tigers have to find that killer instinct and win the final two series to have a chance to extend their season.