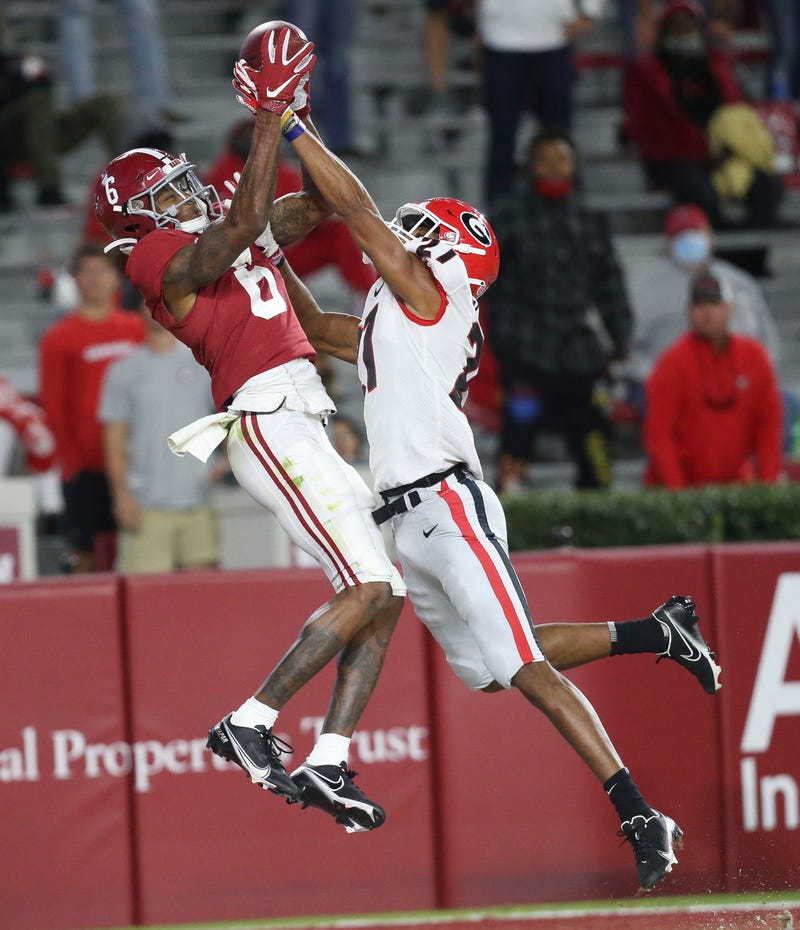 As expected Covid-19 has taken hold on the Southeastern Conference. The University of Florida won’t play again this week after postponing last week’s matchup with LSU. The Gators won’t play again until October 31st.
Let’s take a look at how the SEC stacks up.

1. ALABAMA: The Crimson Tide dispatched No. 3 Georgia last week 41-24. Coach Nick Saban was on the sideline despite testing positive for coronavirus earlier in the week. He later tested negative Saturday before the game. Alabama is No. 2 in the country for a reason and certainly the class of the SEC. Last week: 1

2. GEORGIA: Although they lost, I’m not moving the Bulldogs considering they fell to the top team in my rankings. Plus, I can’t put them behind Florida, when the Gators haven’t played in nearly two weeks because of a Covid-19 outbreak. Georgia’s usual stingy defense was touched up last week against Bama. The Bulldogs will bounce back. Last week: 2

3. FLORIDA: Again, the Gators are dealing with a pretty massive Covid-19 outbreak in their football program. As of now, they are schedule to re-open their practice facility Monday, and hope to play a week from this Saturday against Missouri. Last week: 3

4. TEXAS A&M: The Aggies smashed Mississippi State last week and are on their bye this week. A&M has a very favorable schedule down the stretch and if the Aggies can go on a run, they could find themselves in the post-season. Unfortunately, their lone loss is to Alabama. The Crimson Tide would have the tie breaker in the SEC West, if Bama loses a game this season. Last week: 4

5. AUBURN: The Tigers lost last week 30-22 to South Carolina. Auburn is an up and down team. Now, with two losses Gus Malzahn is on the hot seat as the coach of Auburn. Pandemic or no pandemic, Tiger fans are restless. If they lose this week to Ole Miss, I’d be shocked if Gus is still around. Last week: 5

6. SOUTH CAROLINA: Before the season started, I predicted coach Will Muschamp would be out as the head coach of the Gamecocks by week 5. I was clearly wrong. After losing two straight games, SC won two in a row. This week the Gamecocks face an LSU team that has had two weeks to burn on an embarrassing loss to Missouri. Last week: 11

7. KENTUCKY: Ok, so they do care about football in the Blue Grass State. The Wildcats ripped off two straight wins. Kentucky blasted Tennessee last week 34-7. Don’t be surprised if UK moves up again next week. Last week: 9

8. LSU: If I’m being honest, the Tigers are a big disappointment thus far. LSU’s defense is laughable at times. The scheme has been simplified, so let’s see if it helps. Also, QB Myles Brennan is recovering from a lower body injury and will not play against South Carolina. True freshman TJ Finley will start under center for LSU. Finley’s high school coach, Hank Tierney, says the moment is not too big for the former Ponchatoula standout. Last week: 7

9. ARKANSAS: In time the hogs are going to be tough. Coach Sam Pittman has them headed in the right direction. Arkansas has wins over Mississippi State and Ole Miss. The Razorbacks own the Magnolia State. The Hogs are off this week and have a big matchup with Texas A&M after the bye week. Last week: 11

10. TENNESSEE: The Vols started out with two straight wins and have now lost two straight. They are likely staring down their third straight loss this week against Alabama. Just like in the NFL, when teams like the Raiders are relevant, it’s good for the league. Same holds true for Tennessee. I want them to have success, but they just can’t do it. Last week: 8

11. MISSISSIPPI STATE: The Bulldogs lost three straight games. It’s amazing to think this team beat LSU pretty soundly in week one. After scoring 44 points in the win over the Tigers, MSU has scored a combined 30 points in their last three games. I don’t know, maybe Coach Mike Leech is spending too much time thinking about big foot or alien abductions? Last week: 6

12. OLE MISS: The Rebels are 1-3 with an awful defense. Coach Lane Kiffin has the offense rolling pretty well. Hotty Toddy! Not exactly. How about Notty Toddy? That’s better. Last week: 10

13. MISSOURI: Mizzou was off last week, and have a matchup with Kentucky. Hey, this is a team beat LSU two weeks ago, so maybe they can pull off a big upset again this week against the Wildcats. Last week: 13