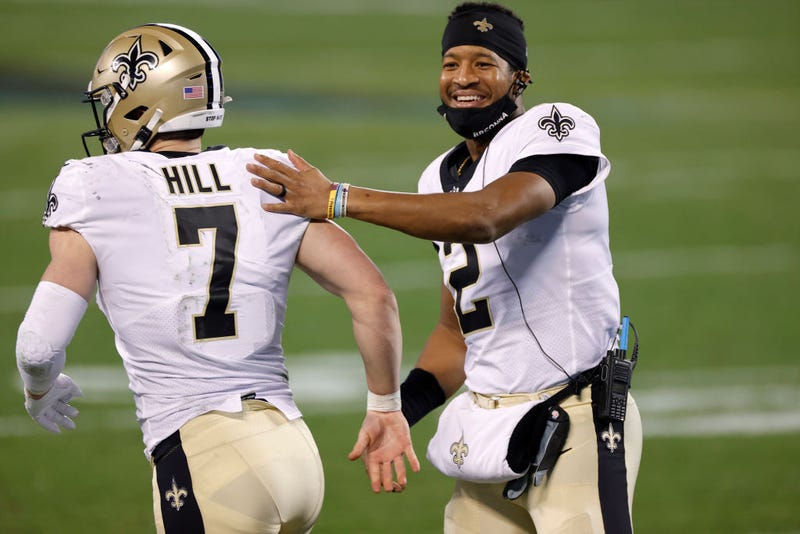 For 15 years, Saints fans didn’t have to think about who the Saints QB was going to be. It was a glorious run having the privilege of watching future Hall-of-Famer Drew Brees dissect opposing offenses. But, all good things must come to an end.

Now that Brees has retired from playing, the question is…will Taysom Hill or Jameis Winston win the starting job?

“When you have those two type of guys in the locker room, not only what they bring from their skill set, but they're really great leaders,” Brees said while taking in some golf at the Zurich Classic. “They set the example, by the way that they work and by the way they prepare. They’re loved by their teammates. I'm excited to see those guys and however this competition plays out.”

Even though Hill is entering year 5 in New Orleans, Winton is the early favorite to win the job. He’s a former Heisman Trophy winner, National Champion, top overall raft pick and has more experience under center in the NFL.

“The guy loves football. He's really a football junkie,” Brees said about Winston. “I could not have been more impressed with Jameis. Honestly, as a teammate, as a guy in the locker room who I think everybody admired his love and passion for the game and the way he worked at it. Certainly his desire to be a great player is there, and that's most important.”

But, the Stormin’ Mormon, Taysom Hill, is planning on putting up a heck of a fight. He recently revealed that his changed up his workout routine from the past four seasons to strictly focus on being a QB, not the Saints Swiss Army knife. But, the skill set he has to be a weapon anywhere on the field is what really sets Hill apart from everyone else.

“If someone would invest an offense in him,” Brees said about Hill being a starting QB. “Just like I'd say the Baltimore Ravens have invested an offense in Lamar Jackson. He has got such a unique skill set, one that does not exist. I mean, he's kind of a once in a generation type of player from that perspective, talking Lamar Jackson. If you commit to his skill set and the things that he does well, then great things can happen. I believe Taysom Hill is that type of player.”

Saints training camp sure looks like it’s going to be a hot one and that’s not even factoring in the Louisiana heat.