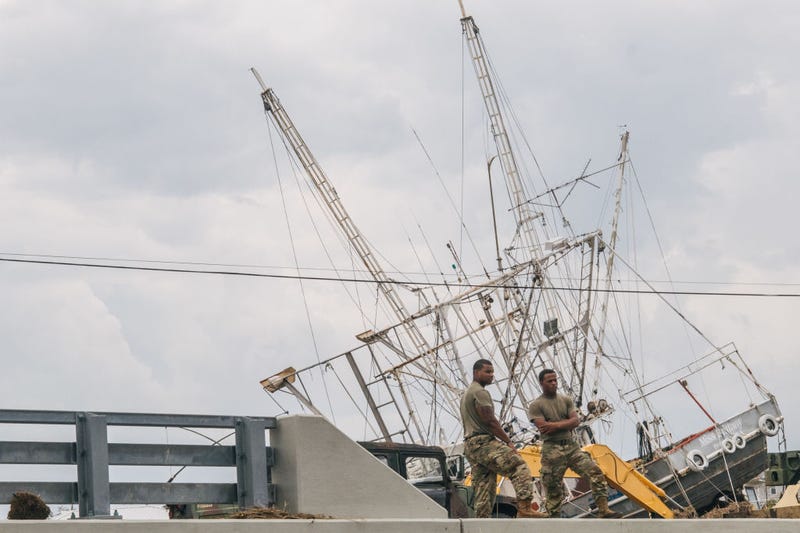 The Kerner Bridge in Lafitte was taken out during Hurricane Ida and local leaders are demanding action be taken against the business they say is responsible. That business owner claims the accusations are based on false information, and tensions are rising over the loss of the vital connector between Lafitte and Barataria.

Tom’s Marine and Salvage has come under fire from both Lafitte Mayor Tim Kerner Jr. and Jefferson Parish Councilman Ricky Templet. Templet told WWL’s Tommy Tucker that this is the second time that this bridge has been taken out in a year from barges that were moored at Tom’s.

“Tom’s Marine and Salvage Company has not been a good neighbor and has never taken consideration the safety and wellbeing of the people of Jefferson Parish,” said Templet who accused the company of being a frequent menace. “Something must be done.”

“That barge that hit that bridge is not my barge, make it very clear,” said Dinh. “The barge parked in next of my facility.”

Dinh said he’s being unfairly targeted by local leaders who are now trying to put him out of business.

“Everybody small town we were closed down, they tried to close my business down, they come with reasons that are not true, they are not right,” said Dinh. “Why didn’t they complain about 100 other boats down the road there that broke loose under Katrina, under, under, uh, Ida that sunk in the canal? Why didn’t they look at that? None of my barges broke loose except that barge parked on the next to my property.”

A temporary bridge has been established over the waterway that now connects Barataria and Lafitte.

Templet said locals aren’t happy about this, or a string of other incidents including eight boat fires and two RV fires that he said have occurred at Tom’s in the past.
Templet said those incidents put six firemen and women in the hospital. He said the most recently case of negligence cut Barataria off for weeks.

“Let’s go ask those citizens whose families, and homes, and business were stranded by this company’s neglect on the other side of Barataria,” said Templet who said the Parish Council has asked for an investigation into the company.

Dinh told WWL he’s been accused of a number of things in the past that once investigated by authorities were not proven. He said he feels the accusations are targeted.

WWL reached out to the man who “Tom” said owned the barge that allegedly made contact with the bridge.
Douglas Alsem of Alsem Construction confirmed the barge was his, and provided his view of the situation.

“This is what it is, there was two boats and a barge,” said Alsem. “One barge was tied to a boat, then the storm came in, the two boats went down the canal and drug the barge with it, because the barge was being held by four pilings that were 80 foot long, driven 20 feet in the ground. The boats broke the pilings and drug everything down the canal and that all hit the bridge.”

Alsem confirmed that barge was his, but said the two boats that dragged the barge down the canal were Tom’s.

“There was two boats and a barge, everybody keeps talking about barges, there was a total of three vessels,” said Alsem. “One barge was tied to a boat, and that boat was tied to another boat. I drove four pilings to hold my barges position and when the tide surge came it drug everything down the canal, the two vessels started floating and pulled the barge to the bridge.”

Alsem said he was one of the first people to survey the area after Ida blew through and the debris field gave a pretty clear picture of what happened.

“One boat went underneath the bridge, which caused it to come off its pedestal I do believe,” said Alsem. “One shrimp boat hit the middle and the barge was on the outside of all of that laying sideways.”

“The corner of the barge hit the bridge,” said Dinh.

The situation is being investigated by the Coast Guard.