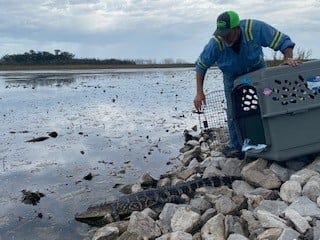 A corroded pipeline that leaked 300,000 gallons of diesel into one part of St. Bernard Parish was reportedly just weeks away from being repaired. That according to St. Bernard Parish President Guy McInnis who told WWL’s Tommy Tucker the pipe was a known issue.

“They knew about this about a year and a half ago, maybe close to two years ago, and since then they had entered into the permit process to fix it,” said McInnis, discussing the pipeline that is owned by PBF Energy subsidiary Collins Pipeline Co. “They were about two or three weeks away from fixing that pipe anyway, so that’s disheartening to hear.

McInnis explained that the pipeline was on private property and largely spilled into two ponds on that property. It was also near the levee system, which McInnis said became a complicating issue when it came to permitting for repairs.

According to the Louisiana Department of Wildlife and Fisheries a thousand fish and 100 animals were killed by the spill, which began in late December. McInnis said 100 animals, including an alligator and snakes, have been decontaminated so far.

WWL TV reports just under 8,000 gallons of the 300,000 spilled have been recovered and the cleanup is expected to be a long-term process.