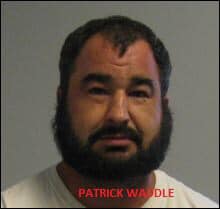 A Terrebonne Parish man is behind bars after he shoots at two people inside a home and then fires at several State Troopers while fleeing the scene according to State Police.

The shooting happened shortly before 9 pm on Saturday in the 1800 block of Bull Run Road in Schriever.

“Patrick Waddle, 38, arrived at the residence and began shooting from outside the residence.  Bullets struck both a female and male resident during the shooting.

Both victims were transported to hospitals for medical treatment.  No motive is being released at this time.  Waddle was known by the victims of this shooting.

The injured Trooper was transported to a nearby hospital, treated for minor injuries to his head, and released a short time later.