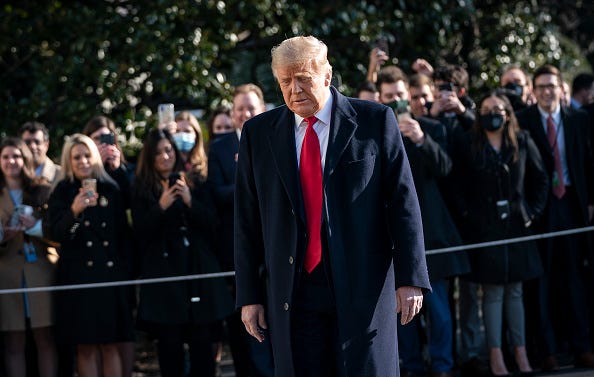 As he boarded Air Force One for one of the last times he will be enjoying the luxury of the flying White House, President Trump told America that he accepts zero responsibility for the violence that erupted last week at the Capitol building. The President also defended his speech at the rally before his supporters marched to the Capitol as “totally appropriate” and that everyone agrees that he did nothing wrong.

Leading up to the “Save America” rally on January 6th, President Trump called on senators and his supporters to “fight” for him.  On December 19, the President tweeted “Big protest in D.C. on January 6th. Be there, will be wild?”

At a rally in Georgia, the day prior to the Senate races that both Republican incumbents lost, President Trump told the crowd, “If the liberal Democrats take the Senate and the White House - and they’re not taking this White House - we’re going to fight like hell, I’ll tell you right now. We’re going to take it back.”

At the “Save America” rally on January 6th, President Trump told his supporters, “We’re going to have to fight much harder, and Mike Pence is going to have to come through for us.  And if he doesn’t, that will be a sad day for our country because you’re sworn to uphold our constitution.”

Trump lawyer Rudy Giuliani was one of the opening acts for the President at the rally, and Rudy said “Let’s have trial by combat.”

Donald Trump, Jr., and others also participated by rallying the crowd to a fever pitch before President Trump began to speak.

Words have different meanings in different contexts.  With the aggressive rhetoric during the lead-up to the rally and combat attire worn by many of the participants, the argument can be made that in that context the word fight could refer to violent actions.  But others can argue that President Trump never meant to incite the rioting that occurred.  How the word fight will be interpreted may be determined by one’s love or hate for President Trump.

It does appear that with all that was known leading up to the January 6th rally and the message of fighting manifested in the many wearing combat attire that President Trump knew what he was suggesting when he used the word “fight.”

President Trump has also spread the idea that antifa was to blame for all of the violence and destruction that lead to at least five deaths at the Capitol last week. Trump ally and House Minority Leader Kevin McCarthy said yesterday that the President deserves some responsibility for the destruction and the deaths; and he also said that it was not antifa that was responsible - it was Trump supporters.

Following FBI briefings, McCarthy said “it is clear that antifa was not behind” the riots and that it was, in fact, right-wing extremists and QAnon supporters. He pleaded with both groups to stop spreading false information about the violence.

We may have entered into a New Year, but the truth remains a hostage of politics.