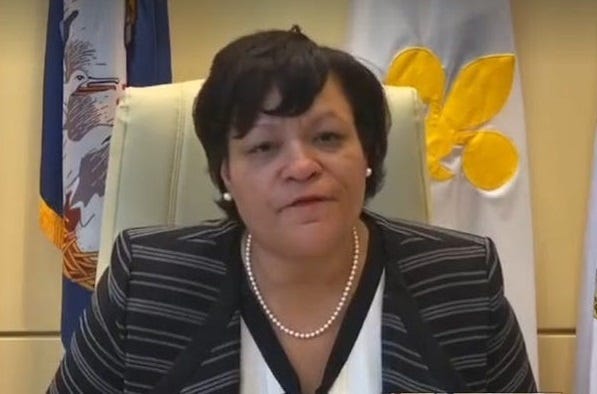 New Orleans is a special place. We that have been here all of our lives know that. A lot of it doesn’t make sense. Some of it is backwards. We cause a lot of our own troubles. But we love it because it’s OUR nonsense, OUR backwardness, OUR trouble. And we’re in it TOGETHER.

When it comes to the Crescent City, you either get it or you don’t. I’m not sure LaToya Cantrell gets it.

I first met Cantrell when a close friend of mine told me about her efforts to help with the recovery in Broadmoor after Hurricane Katrina. She hadn’t been elected to anything but had been organizing people in those areas to make street signs, clean up damaged areas and overall band together to make things better. I invited her on, and she showed up in a track suit after riding her bicycle to the studio. I called her "LaToya from the block." That seems like a loooooong time ago.

The Mayor is most definitely NOT a New Orleans native. She grew up in California and has spoken openly about her stepfather who was a Los Angeles police officer who got hooked on drugs and left her mom. Crips and Bloods were part of the things she had to deal with as well as poverty and drugs. It was the 80s. That’s what L.A. was like.

Cantrell says she stopped in New Orleans for the first time while driving back to California after a trip to Birmingham. it was 1988, and she was 16. She says she left New Orleans, but her heart didn’t. She was accepted at Xavier, and the rest is history.

This morning I spoke with Leo Watermeier with Friends of Armstrong Park about the Mayor’s plan to move City Hall to the Municipal Auditorium. It’s been scaled back, but it’s still floating. During the interview Leo told me he’d told the mayor at one point that she “didn’t get New Orleans.” She didn’t react well, but I think he’s right.

LaToya Cantrell's communication with the residents of Treme has not been good. For that matter, her whole method of communicating with the city is questionable. Her preferred method is to be heard only on WBOK, a historically black radio station. She was willing to come on WWL up until a certain point then pulled the plug. I don’t know why.

The last time she came on she was in studio with me, and we hugged it out when she arrived and before she left. Then…nothing.

I think that is an indication of Cantrell being Unnaturally New Orleans. She fails to realize that issues facing the city affect ALL New Orleanians, and she has a responsibility to communicate with EVERYONE. Her exclusivity with WBOK seems rather Californiaesque to me…where the sides are clearly drawn. New Orleans isn’t like that. We, as New Orleanians, are all in this together when the streets flood and as crime soars.

Her stubbornness with the Municipal Auditorium renovation is another indication. The city is sitting on approximately $40 million in FEMA money designated to rebuild the Municipal Auditorium AS AN AUDITORIUM. Renovations could start today. But the mayor thinks she knows better and wants to repurpose the building. The people in Treme have made it crystal clear they don’t want it, but their objections have fallen on deaf ears. California ears.

New Orleans has been here long before LaToya Cantrell and will be here long after. Instead of trying to make the city like into Los Angeles South, she needs to be faithful to the traditions and cultures that make us US. Madame Mayor, close your mouth and open your eyes and ears. Fix what’s broken but don’t please don’t try to make the city into what you and you alone think it should be. You may never be “naturally N’awlins” but you can become less “unnaturally N’awlins”.