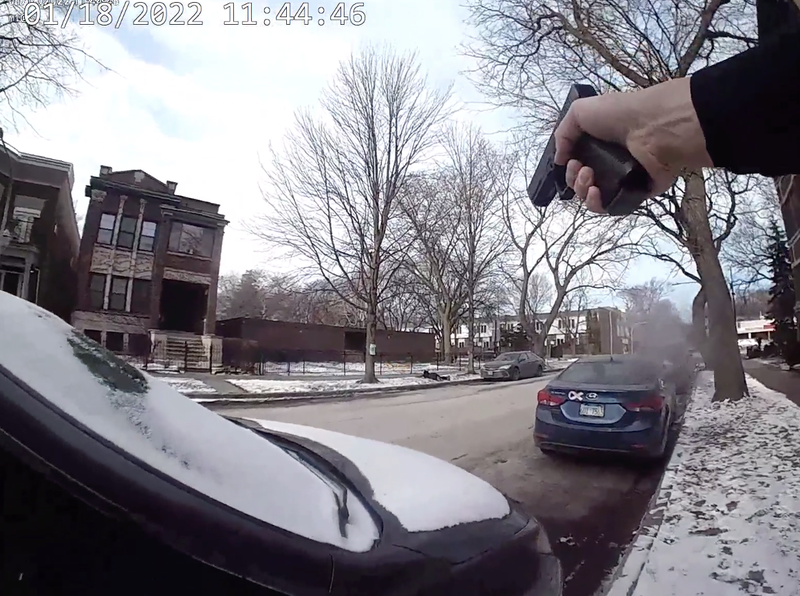 (WBBM NEWSRADIO) — Newly released bodycam video shows a University of Chicago police officer firing across a street at a suspect while repeatedly yelling at him to get on the ground and not move.

The suspect — authorities say he had a gun — was shot and seriously wounded as he continued to approach the officer, even after he was struck by a bullet, according to the university.

The officer had stopped to investigate reports of a man walking south with a handgun drawn on Woodlawn Avenue at 53rd Street shortly before noon Tuesday.

The suspect started firing as the officer stepped out of his car, according to a statement from the university.

But bodycam video released by the school begins with the officer on the front steps of a home, shouting for a man across the street to “get on the ground, get on the ground.”

Seconds later, the officer begins shooting at the man, firing at least five times. The officer then runs closer to the man, using an SUV for cover while continuing to yell “get on the ground” and firing more shots.

About 45 seconds into the 54-second video, the man can be seen lying on the ground. The officer then radios, saying: “Send an ambulance, he’s hit at least two times, officer-involved shooting.”

The man, in his 20s, was taken in critical condition to the university’s medical center. His name has not been released, though the school’s statement said he is not affiliated with the university.

Shortly after the shooting, police blocked off 53rd Street from Kimbark to an alley west of Woodlawn. Six evidence markers could be seen on the ground.

An employee who answered the phone at Kimbark Liquor and Wine said people ran in the store saying they saw “a guy waving a gun” before shooting erupted. The employee, who asked not to be named, didn’t see the shooting himself.

The Chicago Police Department and university are both investigating the shooting. The officer is being placed on mandatory administrative leave pending the outcome of the investigations, the school said. Gunman wounded by University of Chicago police officer refused repeated commands to drop weapon, even after hit by bullet