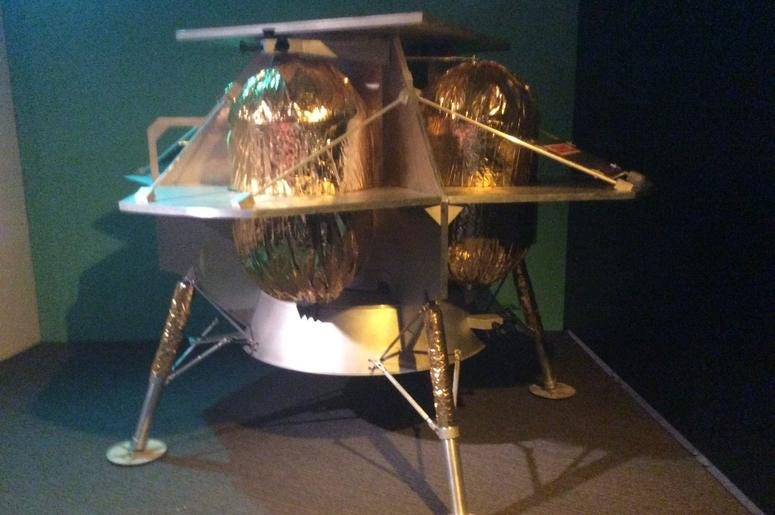 The once-in-a-lifetime Smithsonian exhibition Destination Moon: The Apollo 11 Mission is beginning its “final countdown” at the Heinz History Center.

To commemorate the occasion, you can vote on something uniquely Pittsburgh that will be sent to the moon in 2021, when local company Astrobotic lands the first ever commercial lunar lander.

The Peregrine lunar lander, which will deliver the payload, is currently on display in the Destination Moon exhibit.

The History Center says you can choose from the following:

Heinz Pickle Pin – H.J. Heinz came up with this ingenious promotional item during the 1893 Columbian Exposition in Chicago.

Soil from Moon Park in Moon Township, Pa. – Founded in 1788, Moon Township is the oldest township in Allegheny County. Some historians suggest its lunar name came from its proximity to a crescent-shaped portion of the Ohio River.

Piece of a Steelers Terrible Towel – With six Super Bowl championships, the Pittsburgh Steelers are the greatest franchise in NFL history.

Photo of Toni Haggerty from Primanti Bros. – No visit to Pittsburgh is complete without a stop to see Toni at Primanti Bros. in the Strip District. Primanti’s signature sandwich (meat + fries + coleslaw + Italian bread) was invented as an affordable and practical meal for truck drivers and factory workers during the early 20th century.

Kennywood Token – Founded in 1898 as a small trolley park, Kennywood Park has thrilled millions of visitors with its unique blend of state-of-the-art and death-defying rides with a nostalgic atmosphere.

Write-in your own choice! – Pittsburghers will also have the option to write-in which object they think should be sent to the Moon.

Voting runs now through Wednesday, February 15 and the winning Pittsburgh artifact will be announced the week of February 18, the day Destination Moon closes at the History Center.