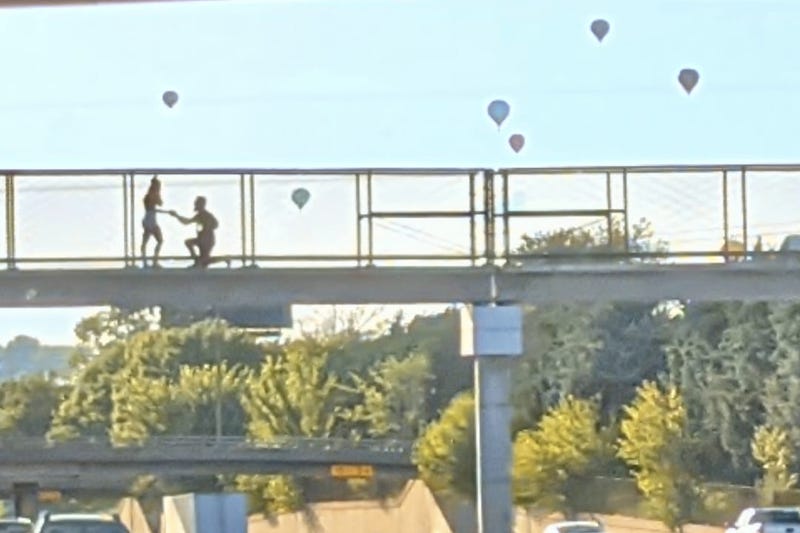 ST. LOUIS (KMOX) - It's another example of why you can't believe everything you see on the internet. The image that's been sweeping through social media in St. Louis and beyond of a couple seemingly getting engaged was a fake proposal.

Jessica Buhrman says she was on Interstate 44 in St. Louis on Saturday and captured a gorgeous photo of a couple apparently getting engaged on an overpass. The mage was shared thousands of times by many, hoping to find out who the mystery couple is. She finally received a reply on Wednesday:

Here's the message she was sent:

"Hi there, saw all your post and wanted to reach out. My girlfriend and I were visiting family and friends and noticed the balloon race was going on and found the bridge. While we were up there we thought it'd be funny if I took a knee to get drivers to honk. We had no idea it'd blow up like it apparently has."

There you have it. It was just a joke.

But Buhrman isn't upset at all. In fact, she's impressed by the all those who shared the story.

"I am still blown away by our community," she stated on Facebook. "Keep caring and looking out for one another. Keep looking for ways to spread joy. And maybe, thanks to ALL of your efforts getting the word out, we will see many engagements on that bridge next year during the 2022 Great Forest Park Balloon Race!

Her original photo was shared thousands of times on a St. Louis wedding Facebook page. And she posted a video on TikTok and Instagram about the mystery couple.

The photo was taken around 5:45 p.m. as she and her boyfriend drove through The Hill neighbor along I-44 on Saturday during the Great Forest Park Balloon Race – as you can see the hot air balloons in the sky.

She called it "the most beautiful engagement, ever."

I was told to take it to TIK TOK so I created my first tik tok. Wow it's a lot easier than I thought. But that's not...