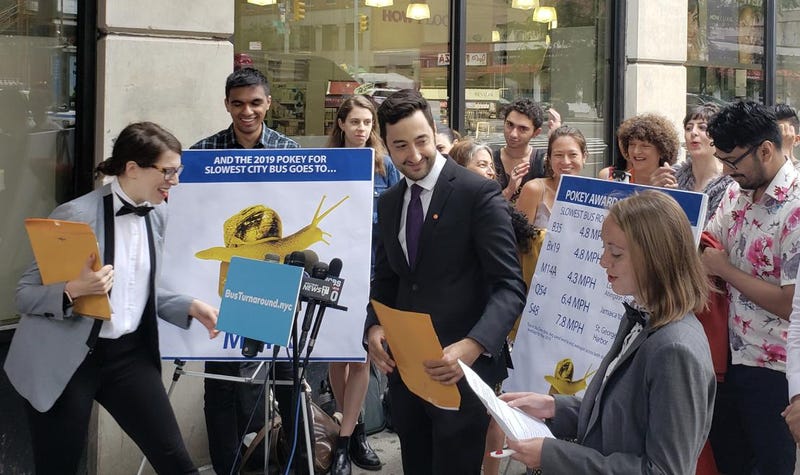 NEW YORK (1010 WINS) –  The Straphangers Campaign and TransitCenter presented their annual awards on Tuesday to commemorate the worst bus routes in the city.

A golden snail on a pedestal was awarded to the M14A as the slowest bus in the city, winner of the “Pokey” award.

Love the graphics for the slowest NYC bus ⁦@1010WINS⁩ pic.twitter.com/I9gkU7F1rA

The M14A travels from the Lower East Side to Abingdon Square and averaged speeds of 4.3 miles per hour.

The slowest bus routes in the other boroughs were the B35 in Brooklyn, the Bx19 in the Bronx, the Q54 in Queens and the S48 in Staten Island.

Only routes with 10,000 daily riders or more were considered.

Transit advocacy groups then showed a graphic with a group of elephants to announce the “Schleppie” award for inconsistent service, granted to the B15, which takes riders between Bedford-Stuyvesant and JFK Airport.

The award is given based on the percentage of buses on the root that bunch.

“Bus bunching is when two or more buses show up at the same time, which can be very frustrating for riders,” said Jaqi Cohen of the Straphangers Campaign.

One out of five buses bunched on the B15.

The most unreliable buses in each of the other boroughs were the BX3 in the Bronx, the M11 in Manhattan, the Q24 in Queens and the S78 in Staten Island.

What’s the slowest bus in your borough? @1010WINS pic.twitter.com/NGVhtH4Urm

The first ever “Lifetime Depreciation Award” was given to the M42.

“It has lost five thousand daily riders or a third of its total ridership from 2012 to 2018,” Cohen said.

She said people can walk faster than the bus moves.