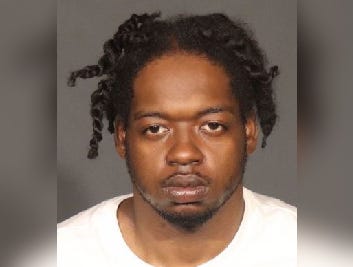 Police are searching for Andrew Abdullah, 25, in the fatal and unprovoked shooting of a subway rider on a Q train Sunday. Photo credit NYPD
By Adam Warner, Juliet Papa, and Curtis Brodner

NEW YORK (1010 WINS) -- A 25-year-old man suspected of killing a 48-year-old Goldman Sachs employee in an unprovoked attack on a Manhattan-bound Q train on Sunday surrendered on Tuesday, despite earlier word that he'd failed to show up to police.

Andrew Abdullah turned himself in, according to WCBS 880's Steve Burns who said he saw the suspect walk into the 5th Precinct in Chinatown after being led out of a gray SUV with his hands carried behind his back.

Andrew Abdullah turning himself in at @NYPD5Pct. Wanted for the killing on board the Q train last Sunday @wcbs880 pic.twitter.com/Sfj5WXYDky

A pastor who has been assisting in Abdullah's surrender process arrived at the stationhouse earlier, but an effort was still underway in what appeared to be a matter of negotiations, sources told 1010 WINS.

A trail of evidence, including video evidence, allowed investigators to connect the dots that led them to identify Abdullah as the prime suspect, sources said. At some point, he took his mask off and police were able to positively ID him through surveillance footage.

The NYPD tweeted an image of Abdullah as they named him as their prime suspect on Tuesday and later confirmed his surrender.

UPDATE: Andrew Abdullah has been placed into custody. Thank you to everyone who shared this information and assisted in the search for this suspect. https://t.co/owcDbAR6vB

Evidence also included a shell casing that was found in the subway car, sources said. Police were able to link it to a gun that they believe the suspect handed off to a homeless person at the Canal Street station. The homeless person sold the firearm to someone for $10. That person hid the gun, but investigators were able to track it down and link it to the shooting, according to the sources.

Abdullah has a string of prior arrests. He was charged previously in a gang-related indictment and did time in prison before being released. He also had a pending gun case dating back to 2020, as well as a domestic violence case and a case involving stolen property in 2021.

🚨We need all eyes on this.@NYPDDetectives need your help identifying & locating this man who is wanted for homicide in the tragic, senseless shooting of a man on a “Q” train that was approaching the Canal/Centre St. station on Sunday.

The shooting took place in the last car of the the train as it crossed the Manhattan Bridge into Manhattan around 11:40 a.m. Sunday, according to police.

The suspect paced back and forth in the train car before shooting the victim as he sat in the train, the NYPD said.

NYPD Chief of Department Kenneth Corey said the gunman "without provocation, pulled out a gun and fired it at the victim at close range."

When the train pulled into the Canal Street station, the shooter fled. 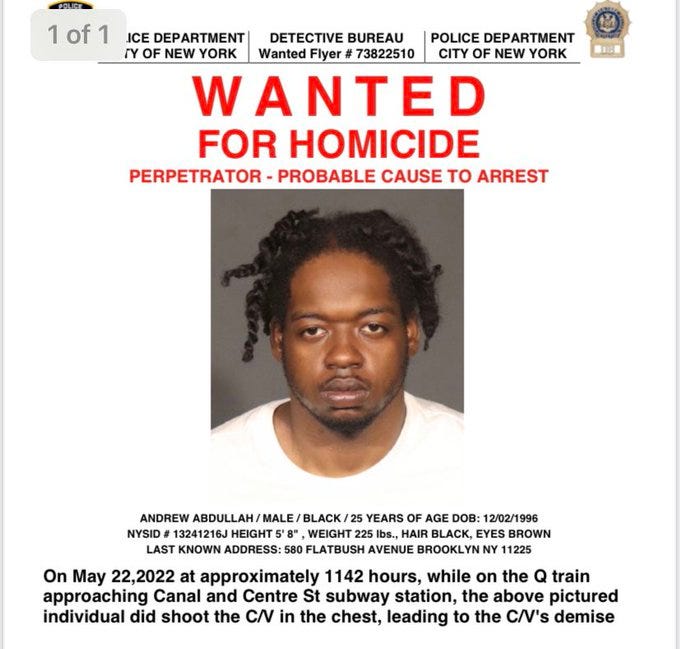 Police are searching for Andrew Abdullah in the shooting. Photo credit NYPD

Emergency responders rushed the victim to Bellevue Hospital in critical condition. He was pronounced dead in the early afternoon.

Corey told reporters at a briefing that while the circumstances were still being investigated, witnesses couldn't recall any prior interactions between the gunman and victim.

A single 9mm shell casing was recovered at the scene, police said.

The victim was later identified as Daniel Enriquez, a Park Slope resident who worked in Goldman Sachs' Global Investment Research division. He was reportedly heading to Sunday brunch at the time he was shot.

Goldman Sachs CEO David Solomon released a statement Sunday night mourning the loss of Enriquez, who he said “was a dedicated and beloved member of the Goldman Sachs family for nine years.” 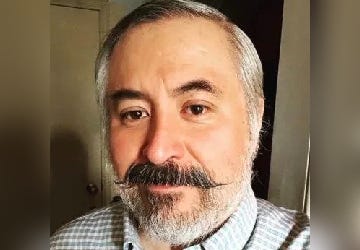 “He worked diligently to support our Macro Research team in New York and epitomized our culture of collaboration and excellence,” Solomon said. “We are devastated by this senseless tragedy and our deepest sympathies are with Dan’s family at this difficult time.”

Gov. Kathy Hochul said the state was working closely with the MTA and offering assistance to the NYPD in its investigation.

“My heart breaks for the victim’s family,” the governor tweeted. “Everyone deserves to feel safe on our subways. I’ll keep fighting to make that a reality.”

We’re working closely with @MTA & have offered @NYPDnews assistance as they investigate the fatal shooting that took place on a Q train this morning.
My heart breaks for the victim’s family. Everyone deserves to feel safe on our subways. I’ll keep fighting to make that a reality.

Mayor Eric Adams took the subway to City Hall late Monday morning to assure straphangers that they can ride safely in the transit system.

Adams said he'd meet with the police commissioner to discuss the further deployment of officers in the subway. Speaking at an event Monday, he said he also wants to implement technology that can identify guns in the subway.

The mayor called the shooting "unimaginable." "You're sitting down, going to brunch, going to visit a family member, a person walks up to you and shoots you for no reason," he said. "That is the worst nightmare."

Riding that train -⁦@NYCMayor⁩ rides the D and 4 trains to assure passengers -and says more random@checks will be done for safety ⁦@1010WINS⁩ pic.twitter.com/htiOsh5qhl

The shooting comes a little more than a month after 10 people were shot and wounded in a crowded N train in Sunset Park in April. A suspect, Frank R. James, was arrested in that shooting and faces a terrorism charge.

Police are still searching for the gunman and asked anyone with information on the shooter’s whereabouts to call the NYPD Crime Stoppers Hotline at 1-800-577-TIPS (8477) or for Spanish, 1-888-57-PISTA (74782). Anonymous tips can also be submitted at the Crime Stoppers website or on Twitter @NYPDTips. 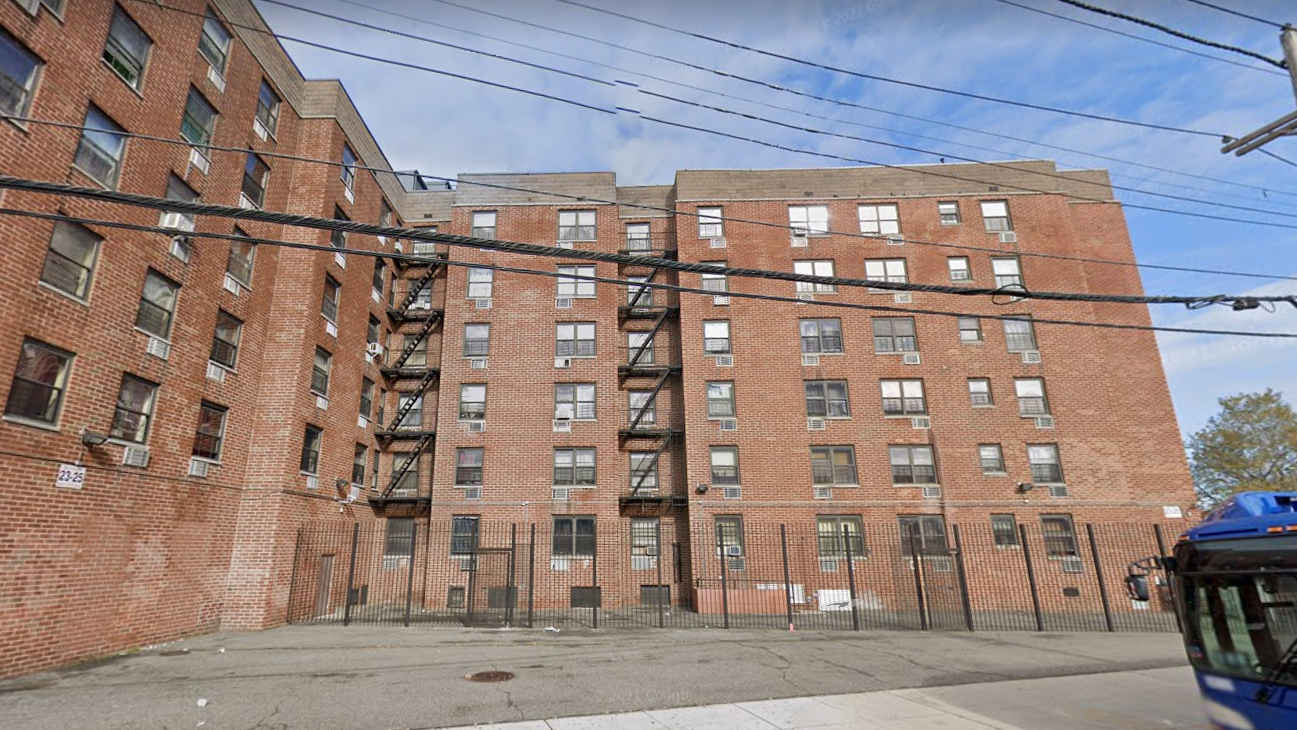 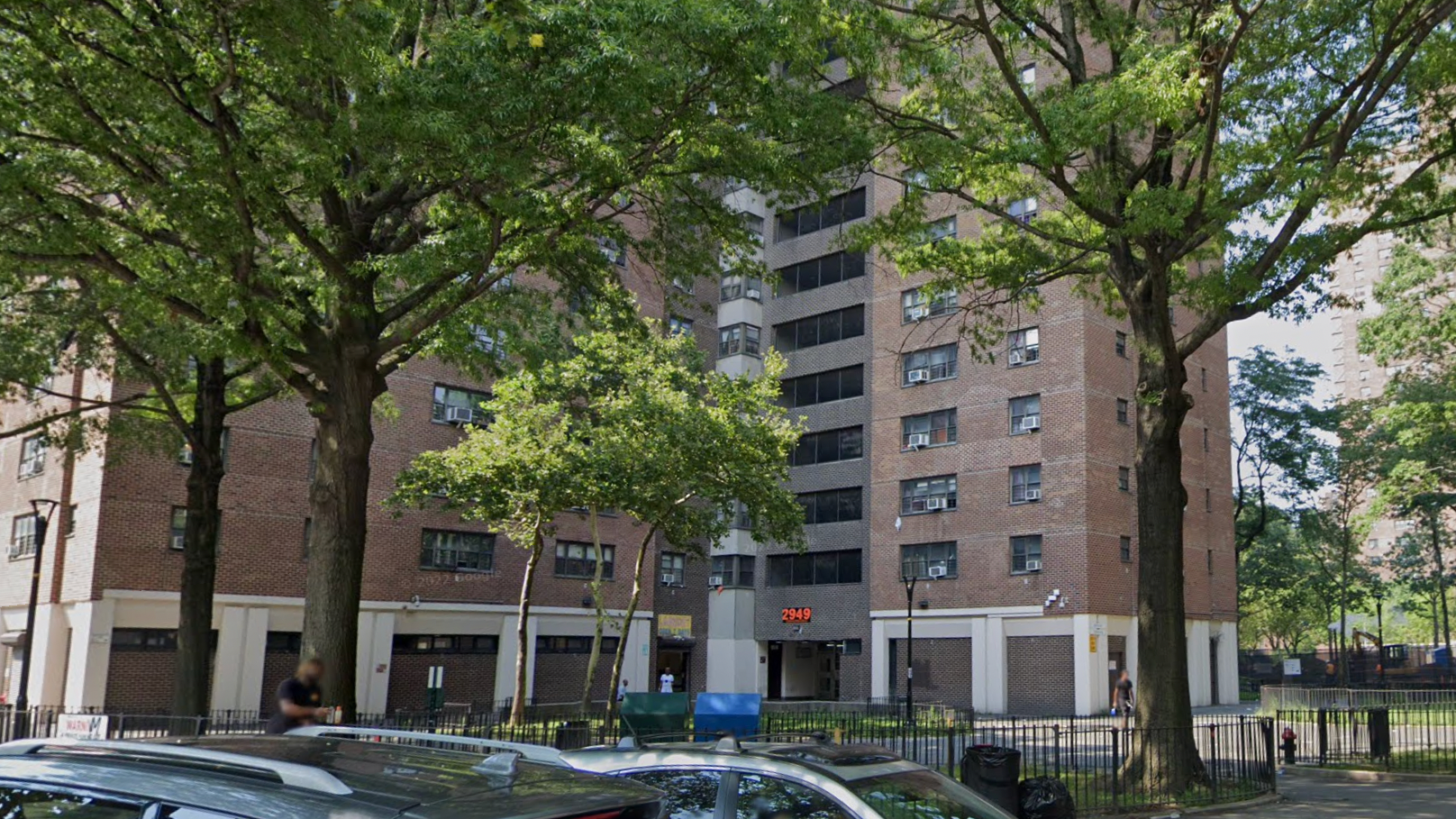