(RADIO.COM Sports) Former National League MVP and five-time All-Star Andrew McCutchen signed a three-year, $50-million deal with the Philadelphia Phillies ahead of the 2019 season. As he prepares for the final season of that pact, the jury is still out on whether the deal will be viewed as a mutually beneficial one.

Unfortunately for McCutchen, what might have been his sixth All-Star campaign was ended prematurely as he suffered a season-ending torn ACL early that June.

Because the 2020 season didn't start until late July, McCutchen was ready for Opening Day, but the lingering effects of his knee injury clearly hampered him. In 57 games last season, McCutchen slashed .253/.324/.433 with 10 home runs, 34 RBIs, 22 walks, -8 defensive runs saved in left field and a -0.2 fWAR. McCutchen still produced some runs, but both his ability to get on base and his defense took major hits in his second season with the Phillies.

Now 34, McCutchen is set to be paid $20 million in the final year of backloaded contract. Without the designated hitter returning to the NL, his ability to bounce back, specifically in the field, may go a long way in determining whether the Phillies can compete in a crowded NL East.

As the Phillies hope for a career revival from McCutchen, here are our 10 best projected left fielders for the 2021 season. 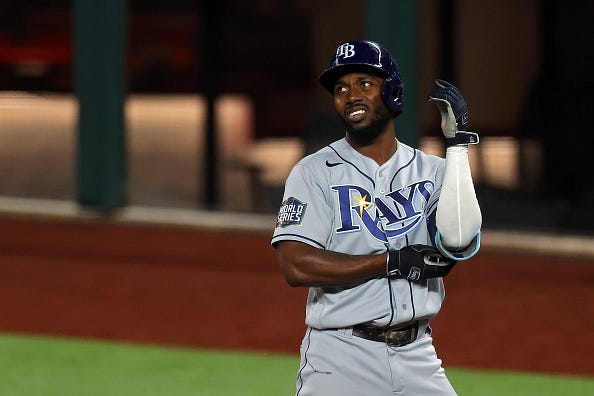 Arozarena was difficult to figure out what to do with in these rankings. On one hand, his regular season production last year -- .281/.382/.641 -- came in too small of a sample size (23 games) for that alone to land him on a list like this. However, he had one of the great postseason runs in MLB history, hitting .377 with 10 home runs in 77 at-bats, helping the Rays to reach the World Series. Barry Bonds and Babe Ruth are the only players in MLB history who have ever hit at a clip anything like that in the regular season, but we're going to bet that the Rays found something in the 25-year-old Arozarena and that he impresses over his first full big league campaign. 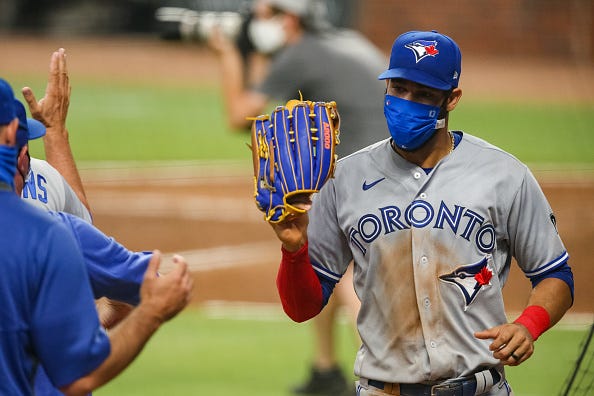 Gurriel was excellent in the pandemic-shortened season at the plate, slashing .308/.348/.534 with 11 home runs, 33 RBIs and an .882 OPS. Gurriel has experience playing multiple positions, none of which he's especially strong at. Still, with the addition of George Springer, if Gurriel is able to come anywhere close to the production that he put up in 2020, the Blue Jays will have an excellent chance to return to the playoffs for the second consecutive season. 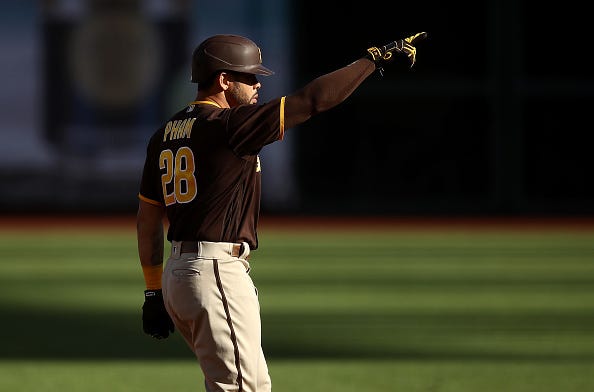 Pham is among a group of notable veterans hoping to throw out the 2020 season entirely. While the Padres had their best season as a team in at least a decade, Pham hit just .211 in his first regular season in San Diego. That acknowledged, he hit .375 in 24 postseason at-bats, and Pham slashed .274/.368/.456 with an .824 OPS in the two seasons prior. Pham is hitting in a loaded lineup, and our guess is he'll be a big part of one of the better teams in the sport in 2021. 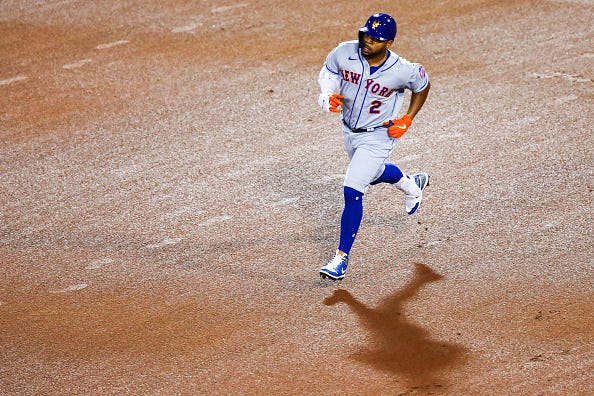 Smith doesn't really belong in left field, but with Pete Alonso at first base and no DH in the NL, that's where he'll get the bulk of his starts in 2021. The 25-year-old Smith had a breakout offensive campaign in 2020, hitting .316 with 10 home runs, 42 RBIs and a .993 OPS. Even if it isn't a long-term solution, Smith's bat currently more than makes up for any shortcomings he may have in the outfield. 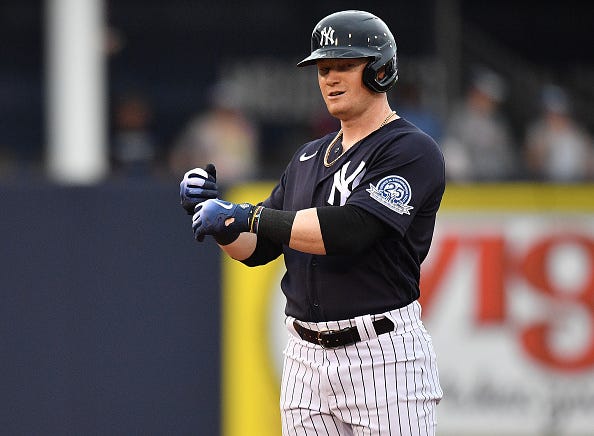 It feels like Frazier has been around forever, but he's still only 26 and coming off of his most impressive showing at the MLB level yet. In the 39 games that Frazier played in 2020, he homered eight times, drove in 26 runs and walked 25 times. The Yankees are flush with outfield options, but this should be the season that Frazier gets an extended chance to prove he can be an everyday left fielder. 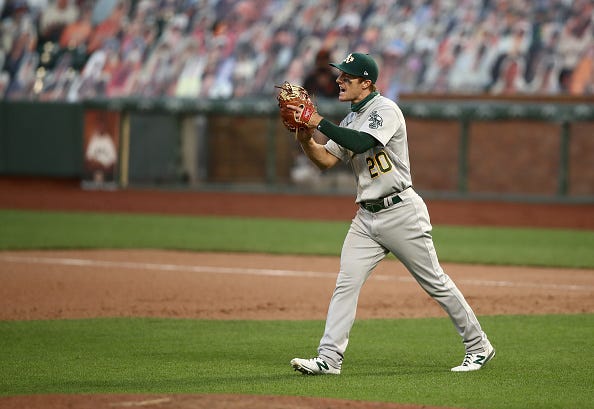 One of baseball's most underrated players at any position, Canha has been a late bloomer who has really clicked with the A's over the past two seasons. Since the start of the 2019 season, Canha's .393 on-base percentage is eighth in all of baseball. Over that same time span, Canha has homered 31 times and driven in 91 runs. Canha got his largest chunk of at-bats last season as a DH, though the guess here is that with the addition of Mitch Moreland, Canha will get slightly more at-bats in left field than anywhere else this year. 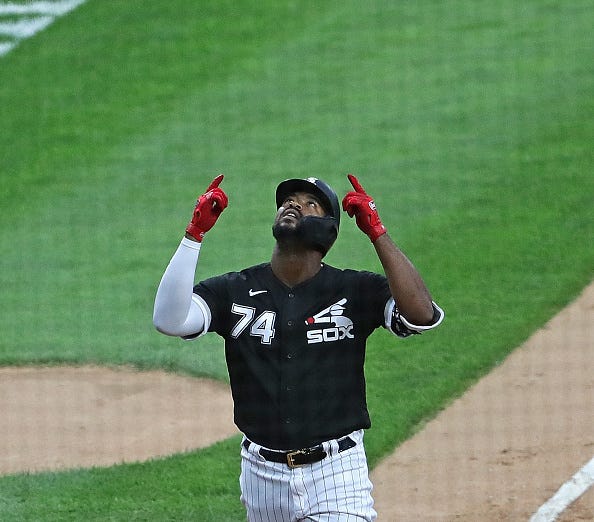 Ahead of his age-24 season, Jiménez set the bar nice and high for himself, saying that he believes he'll be the American League MVP eventually. Jiménez may need to improve his defensive numbers for that to happen, but his bat will more than play. Over the first 177 games of his MLB career, Jiménez slashed .276/.321/.527 with 45 home runs, 120 RBIs and an .848 OPS. If he can get on base a bit more consistently, Jiménez is going to be a perennial All-Star. 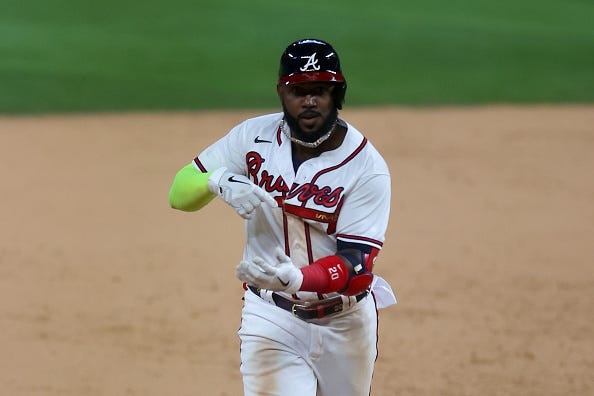 In a perfect world, Ozuna would be a DH. Still, Ozuna's bat forces him onto this list, even if he'll be a below-average left fielder. A year ago, Ozuna led the NL in home runs, RBIs and total bases while also hitting .338. He parlayed that into a four-year, $65-million deal, and he figures to benefit from continuing to hit around Freddie Freeman, Ronald Acuña Jr. and Ozzie Albies for the foreseeable future. 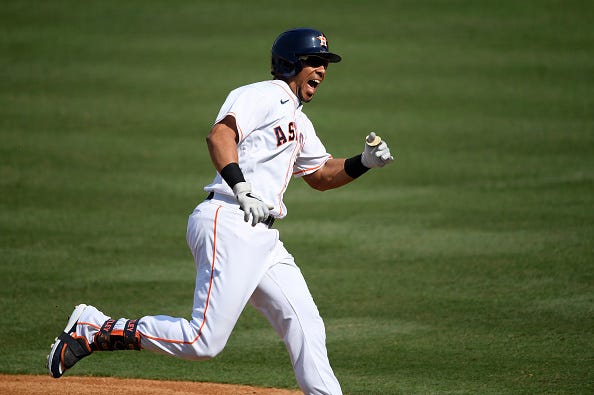 For a minute, it appeared that Brantley was going to join George Springer in leaving Houston for Toronto, but he ultimately returned on a two-year, $32-million deal. Brantley was an excellent player in Cleveland but often got injured. Over his first two seasons with the Astros, he has stayed healthy and slashed .309/.370/.497. A four-time All-Star, Brantley has quietly been one of the best hitting outfielders of his era. 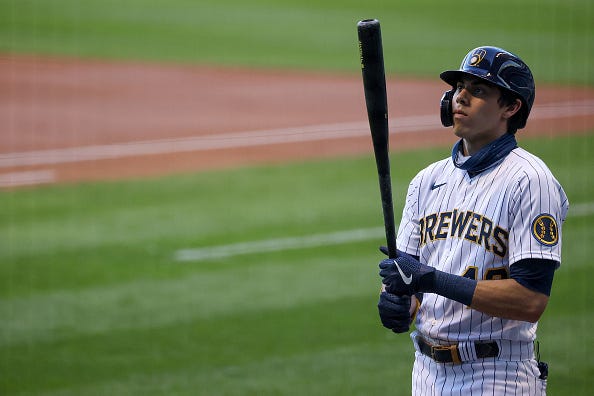 Yelich had -6 defensive runs saved in his first season as a primary left fielder in 2020, though that's far from the biggest concern of the Brewers. After winning the NL MVP in 2018 and finishing runner-up in 2019, Yelich slashed just .205/.356/.430 in 58 games in 2020. We're simply making the bet that considering he's only 29, Yelich will return to be something like that player that was perhaps the best offensive player not named Mike Trout for two seasons.