Here are the quick hits and observations from Tuesday, August 2 at Atlanta Falcons training camp in Flowery Branch as the team prepares for the upcoming 2022 NFL season.

After playing with full pads for the first time Monday, the Falcons extended the duration and intensity of their session Tuesday. And part of that intensity came through one-on-one battles early in the session – a portion in which Kyle Pitts absolutely abused two Falcons linebackers for touchdowns. One of the linebackers he beat deep was the tremendously athletic Troy Andersen. Pitts’ footwork on the route against Andersen had the rookie stumbling down the field trying to keep his feet and his speed, but he was simply no match for the second-year tight end.

“The game has slowed down just a tad. Just a little bit,” Pitts joked to media after Saturday’s practice, with the obvious insinuation that he feels much more prepared heading into his sophomore season in the NFL. “It’s a little slower than it was last year because I’m more confident knowing the game, seeing different defenses, being able to break it down… that’s still something I’m working on.”

Knowing that Pitts is working hard to be prepared pre-snap is great, but what showed off in Tuesday’s practice is his ability to beat linebackers deep and defensive backs short. He’s a player who creates a mismatch on every play, and if teams do try to bracket him, they’ll leave themselves exposed to Drake London and Bryan Edwards. Edwards, by the way, was back in practice today with a non-contact jersey on – though he was a pretty active participant. London, to his credit, drew gasps on a play with elusiveness after the catch. He caught a ball going out to the sideline, but was able to plant hard on his left foot to stop on a dime before cutting back infield to pick up additional yards. While it’s true that London’s top end speed is not eye-popping, he’s certainly not slow, and is surprisingly agile with the ball in his hands.

If you read yesterday’s notebook, you will know that Elijah Wilkinson seems to have solidified his place above Jalen Mayfield atop the LG depth chart. After another practice with Wilkinson as the starter, I’d say it’s his job to lose at this point – something that’s unlikely to happen given the current personnel along the offensive line.

I asked Arthur Smith yesterday: given the state of the competition at offensive line, is there an ideal timeline as to when he’d like to have his offensive line starters identified? His answer somewhat surprised me. “As soon as possible.” Meaning, the team isn’t going to wait around for players trying to win the starting jobs to step their games up. That certainly isn’t happening with Mayfield, who got beat twice by pass rushes today, including once in the aforementioned one-on-one period.

Also worth noting along this topic is that despite much criticism, Kaleb McGary has started at RT every single practice. Germain Ifedi is statistically the better pass blocker in his career, but McGary has not given up a sack or even much of a hurry so far. But being only two days into pads, we will see many more pass rush reps in the coming days.

Drew Dalman and Matt Hennessy continue to alternate at center.

The Falcons were already thin at defensive line following the retirement of Eddie Goldman just prior to training camp, and are even more so now after losing Vincent Taylor to a ruptured Achilles tendon that occurred Monday. Arthur Smith hinted that a corresponding move will be made, though none has been announced yet. Smith made sure to mention that the Falcons have some defensive lineman “flashing.” That’s likely a reference to Derrick Tangelo and Jalen Dalton, who both had good days Tuesday. 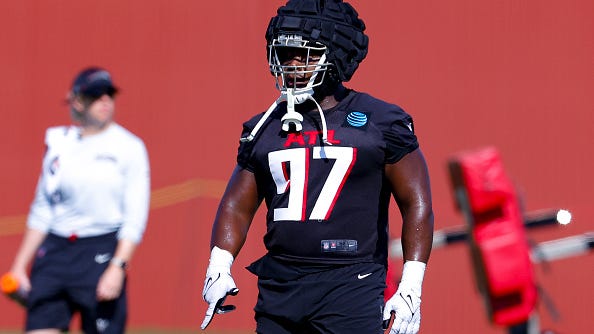 What needs to be fixed to better the Falcons defense?