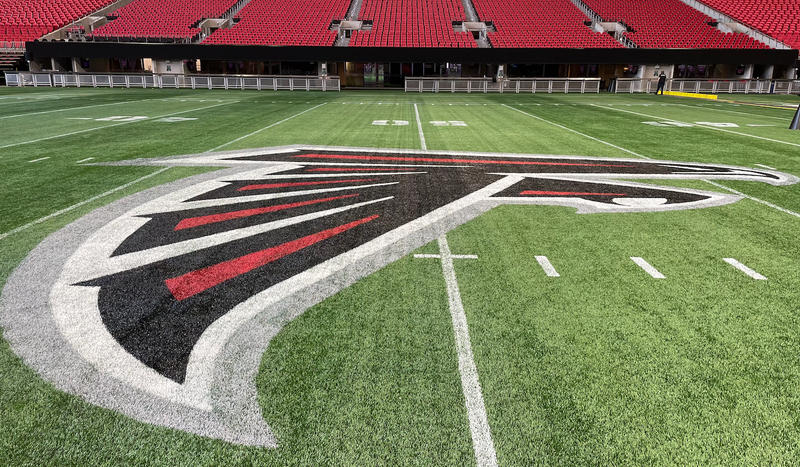 Midfield at Mercedes Benz Stadium prior to the Atlanta Falcons 2022 Draft Party. Photo credit 92.9 The Game
By Steven Gagliano

As the Falcons captains made their way to midfield for the coin toss prior to Sunday’s win over the Bears, they were joined by a special guest.

Daniel “Tres” is a survivor of the Robb Elementary School tragedy in Uvalde, Texas

He's a huge Falcons fan and on Sunday, we were honored to have him as our honorary captain pic.twitter.com/uqrDVqC3gS

Daniel ‘Tres’ Ruiz, a survivor of the May 24 shooting in Uvalde, Texas, joined the team as an honorary captain. Following the tragedy that left 21 victims—19 Robb Elementary School students, including his cousin Ellie Garcia, and two teachers—dead, Ruiz was seen on the news wearing a Falcons’ Dean Marlowe jersey as he described how he escaped the building.

The then-Falcons safety asked social media for help in getting him in touch with the family. The team invited Ruiz to practice back in June, and this past week, fullback Keith Smith delivered the surprise via video that he would be serving as a captain with his favorite team.

“I know you’ve been watching us on TV and following us, and we just thought it’d be cool if you come see us live and in-person. And not only that, we want you to be our honorary captain…We miss you and we love you,” Smith said.

Ruiz was left speechless by the honor, and come Sunday, he helped to deliver a victory for the Falcons.