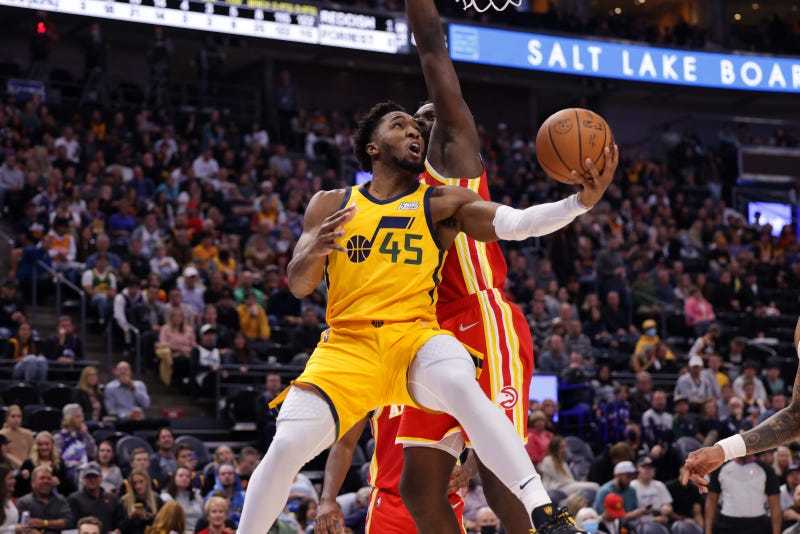 The Atlanta Hawks made a major splash with the acquisition of Dejounte Murray in late June. But do Landry Fields and Travis Schlenk have another trick up their sleeve?

WHAT THE FUTURE FOR DEANDRE HUNTER LOOKS LIKE WITH THE HAWKS

Jazz guard Donovan Mitchell’s name continues to be floated in trade rumors with Knicks fans hoping the New York native winds up playing at Madison Square Garden. But a report from The Athletic’s Shams Charania indicates the Hawks, and several other squads, have reached out to Utah.

Along with the Wizards, Raptors, Hornets, Kings, and Heat, Atlanta has at least inquired about Mitchell’s availability with Charania reporting that trade talks between Utah and New York have “moved slowly.”

The report also indicates that the Knicks' asset pool with young players and draft picks puts them in a prime position to acquire Mitchell. To get Murray from the Spurs, the Hawks parted ways with three first-round picks and Danillo Gallinari. The price tag for Mitchell is reportedly steep which could take Atlanta out of the conversation.

According to Marc Stein, Utah GM Danny Ainge is looking for six first-round picks after getting four picks and five players from Minnesota for Rudy Gobert. As it stands, the Hawks have just five first-rounders between now and 2029, so if they’re serious about landing Mitchell, Atlanta’s package would have to include young players. Names like John Collins, Deandre Hunter, and this year’s first-round selection AJ Griffin could be used to sweeten the deal.

This isn’t the first time the Hawks have been mentioned in the Mitchell sweepstakes, and his fit with Atlanta’s current roster once again comes into question. While he averages nearly 24 points per game for his career, Mitchell’s defensive struggles compare to those of Trae Young.

Pre-Dejounte Murray deal, it may have been more plausible that the Hawks would be in a position to bring the 25-year-old star to Atlanta, time will tell as Charania’s report also states that the Jazz are willing to be patient as offers come in.