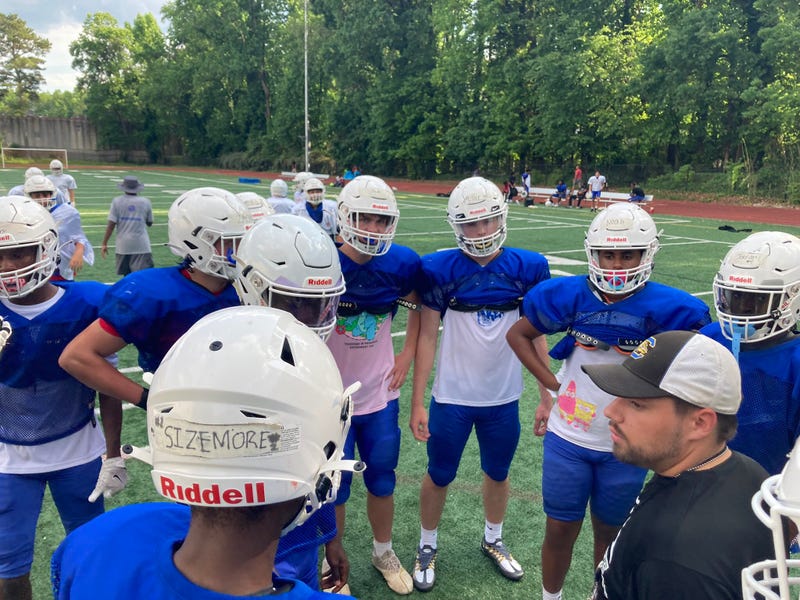 I stopped by North Dekalb Stadium and found the Chamblee Bulldogs getting the off season work in in preparation for the 2022 season. It a summer of anxious excitement for the coaching staff as players, as the Bulldogs will be retuning to region play after playing non-region schedules for the past two seasons. Chamblee went (5-1) in the COVID plagued 2020 season, and went (9-1) in 2021. There was no chance for post season play, but head coach Bob Swank is happy about strides the program has made. “It’s a 100 percent difference,” says Swank.” “When we got here they had gone (1-39 )the previous four seasons. It was bad moral and bad attitudes. Just about every bad thing you could think about a football team.”

Swank , who is starting his second season as head coach at Chamblee, and leads a team runs an upbeat offensive attack led by Senior quarterback Fabian Walker, Jr. Last season Walker threw for over 1300 yards and 20 touchdowns, with only 3 interceptions. The other think Swank did was land some new faces on his team, and he did it the old fashioned way. “We just got out around the building,”said Swank.”

“We invited every kid that we could to come out and play football. Every year , it seems, we had seniors from another sport come out and play football and make huge impacts. Last year it was a pair of baseball players, the year before we had two good ones from the basketball team.” This fall the Bulldogs aim to return to the state playoffs for the first time since 2009. They will be facing a schedule in region 4-5A that will include Tucker, Decatur, and Arabia Mountain. Chamblee will kickoff the 2022 schedule on August 26 against Towers.. We hope that you plan to join us for season two of the High School Football Scoreboard Show, every Friday night on Sports Radio 92.9 The Game.