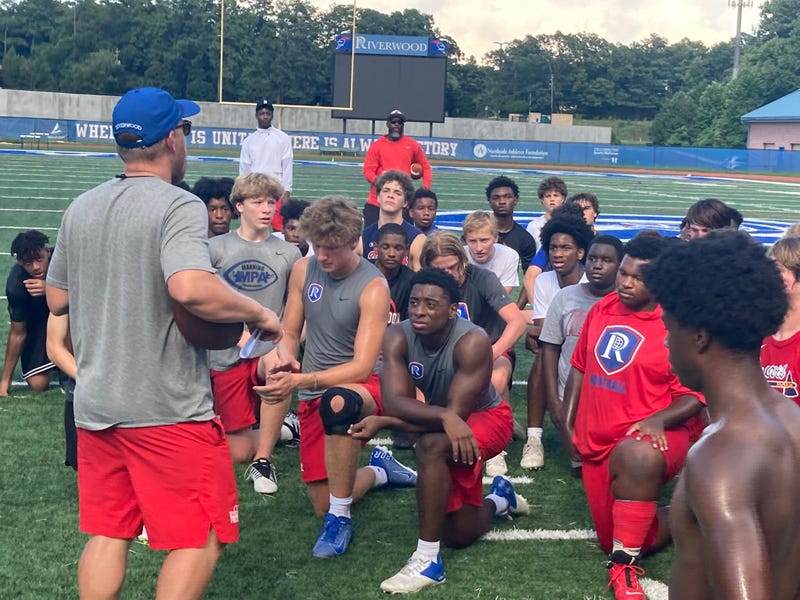 A Work In Progress has been a theme at Riverwood High School in recent years as the series of upgrades and additions to the school have left a most impressive structure on the North Fulton structure. This fall the Work In Progress sign could be posted outside the football locker room as new head coach Michael Young has taken over a team that has some growing to do.

"I got the job in February. after Coach Edwards left," recalls Young. "He did such a good job, I’m just trying to pick up where he left off . We have some young kids but we are excited for guys to step up and try to continue that winning success that Coach Edwards brought here ." In four seasons as head coach of the Raiders, Robert Edwards teams made the playoffs three times, won a pair of region championships and a school record 11 win season in 2019. This fall the former UGA star has returned to his alma mater, Washington County High School .
15 seniors from last season graduated in the spring leaving a new coach with a new team and new region rivals .This season Riverwood will play in region 4-6A. You won't hear the coach mention that to his team.

"Our guys are excited and they don’t care who shows up on Friday night, " says Young. " They don’t know half the teams in our new region yet. So its good for us. They just show up and whoever is across the line we are going to take them on" The Raiders have spent the past two seasons in a tough region 7-6A with Cambridge, Johns Creek, Creekview, and River Ridge. Coach Young greets a change in region for personal reasons. " I’m a Collins Hill graduate," says Young. "We now have Marist and St Pius and that will be fun. I never got to play against some of those private schools, now we get the opportunity to.. We also have Dunwoody, South Cobb and North Atlanta." Riverwood will open the 2022 season on Friday August 19 hosting Alexander.