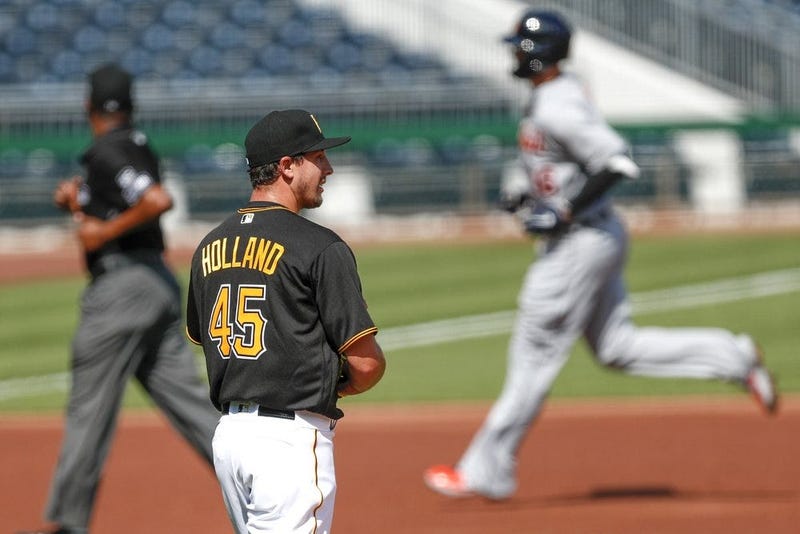 Detroit sent four of Holland’s first 11 pitches over the fence at PNC Park to propel the Tigers to another big offensive outburst against reeling Pittsburgh. A night after a 17-13 win in 11 innings, Detroit came out swinging and sent the Pirates their ninth loss in their last 10 games.

Nine of the Tigers’ 16 hits went for extra bases. Their first-inning deluge marked the first they’d gone deep four times in the same inning since they did it on June 1, 2013, against Baltimore.

Cabrera got three hits, including his 481st career home run. The 37-year-old also drove in three runs to move him past Hall of Famer Jim Thome and into 24th on the all-time list with 1,701. Hall of Famer Reggie Jackson is next with 1,702.

A night after driving in five runs, Goodrum homered and doubled. Jonathan Schoop added three hits and JaCoby Jones turned aside a Pittsburgh rally when he led off the sixth with his fourth home run of the season after the Pirates had drawn within 6-5.

Ivan Nova (1-0) nearly let a big early lead slip away. The veteran, who played two-plus seasons for the Pirates from 2016-18, gave up five runs on six hits with three walks and three strikeouts.

Kevin Newman tied a career-high with four hits and drove in two runs for Pittsburgh.

The Tigers arrived in Pittsburgh hitting .205 on the season. The team’s average has now risen to .239 following two games against the Pirates’ battered pitching staff.

Holland, who made the team out of summer camp after signing a minor league deal in the offseason, needed to eat up some innings after the Pirates churned through eight pitchers on Friday.

The 11-year veteran is a boxing fanatic — of former heavyweight champion Mike Tyson in particular — and watches a video that splices knockouts with important strikeouts he’s recorded. He was on the receiving end of a flurry from the Tigers in the game’s opening minutes.

Goodrum took Holland’s second pitch and sent it over the wall in left. After Schoop singled, Cabrera connected. Cron followed with a drive to the seats in center. Pitching coach Oscar Marin came out to talk to Holland. It didn’t work. Candelario sent the very next pitch over the wall in center for his first home run of the season.

Holland, however, dug in. At one point he retired 10 of 11 batters and didn’t leave until three batters into the sixth. He threw 112 pitches in all while giving up nine runs on 13 hits.

After going through three relievers, the Pirates turned to catcher John Ryan Murphy in the ninth. Murphy retired the Tigers in order on eight pitches in his third career appearance on the mound.

Pirates 1B Phil Evans exited on a stretcher in the top of the sixth after colliding with RF Gregory Polanco while they tried to chase down a flyball in foul territory. Polanco’s right elbow hit Evans in the head as the two reached for the ball. Evans was alert while being strapped to a board by medical personnel. Polanco, who also briefly went down, remained in the game.

Pirates: Closer Keone Kela (COVID-19) pitched an inning of live batting practice but there remains no timetable for his return.

Tigers: Spencer Turnbull (1-0, 2.45 ERA), who ended a 19-start winless streak last week when he beat Cincinnati, will go for his second victory on a row in the series finale on Sunday.

Pirates: Joe Musgrove (0-3, 6.75) will attempt to bounce back after getting knocked around in a loss to Minnesota.