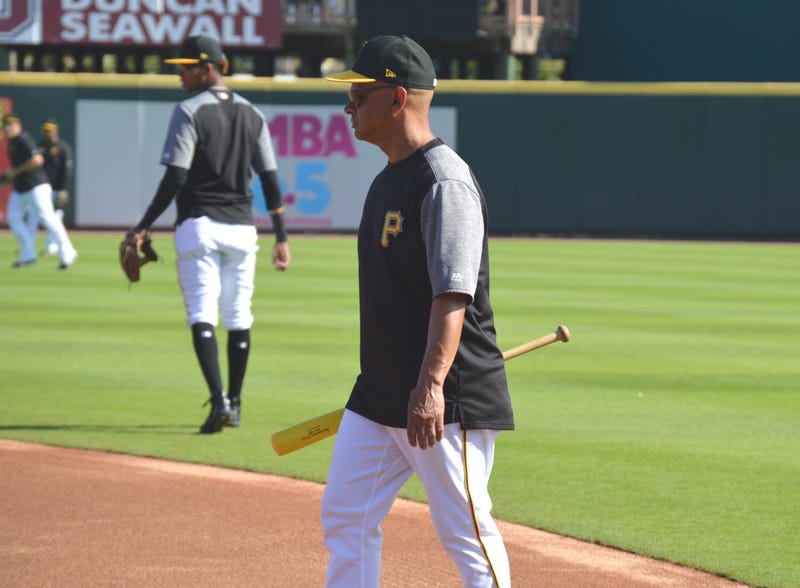 BRADENTON, FL (93.7 the Fan) – It’s been a topic this spring that with a pitching staff that likes to throw strikes, will the infield defense pick them up.  Numbers would tell you that they are middling, the 21 errors during Grapefruit League play is 8th in the National League.  The Bucs have also turned 21 double plays which is 7th.

We talked to infield coach Joey Cora about the three positions he is responsible for, this thoughts on the second and third basemen and the two shortstops in camp.

“I know this is a cliché in Spring Training, but the guy has come in and put the work in and he is in the best shape of his life.  He’s moving better than he ever has.”

“I think the defense is fine, the rust is going to come on offense.  Watching and seeing pitches, breaking balls and all of that stuff.  It’s tough.  That’s where you will see the rust the most, defensively he’s been extremely good.  The arm is there, the reactions are there.”

“We are working with Moran on some stuff, which hopefully will get him better”

“We are trying to get him to play a little deeper this year, so it’s a different perspective.  He hasn’t been as deep that he is playing right now, so we are trying that.  Hopefully he gets it, we still have a little bit of time in Spring Training.  But the thought process behind him playing deep is that he will get to more balls.  So when he gets used to that, that he is getting to more balls and he doesn’t have to rush, he will be absolutely fine.  Hopefully he will get it.”

“It’s key for him.  It’s tough to do that, you use different muscles, different thought processes.  It will not only help on defense, but it will help on offense because he doesn’t have to spend so much energy getting ready for so many positions.  He’s going to focus on being a second baseman and then hit and do his thing.”

“Very athletic, you are going to see some plays that it’s been a long time since somebody have made those plays for us.  He has great range and a tremendous arm.  He is just trying hone his skills to make sure he makes the routine play that we need to, that has been made for years here with this team.  We get the routine plays down and then he is going to make some plays that are going to be great.  It should be fun on defense with him playing shortstop.”

“He played for me in Altoona and he was much better than he was in September.  He was tired, lost a lot of pounds so he wasn’t the player that we expect to see.  Now he is fully healthy and strong and hopefully we get to see that player we all expect him to be.”

Next wave at AAA (Ke’Bryan Hayes and Cole Tucker)

“They’ll bring a very athletic infield when they get here.”

“Cole has improved so much from the first time I was with him in the minor-leagues.  He’s healthy, he’s experienced.  He was always going to bring energy, but now he’s getting the fundamentals down and he’s got a lot of confidence.  Hopefully he will get a good year in AAA and he’s going to be ready to help us really soon.”

The best news from the interview is that Cora said, thanks to help from Pittsburgh and across the United State, his native Puerto Rico is back.  Cora said it’s amazing the turnaround from the hurricane in 2017.  Cora now has a favor to ask us.