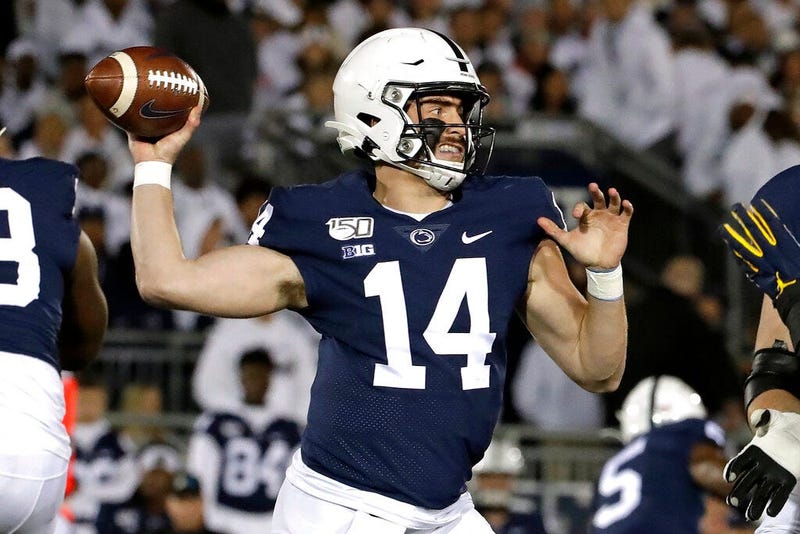 UNIVERSITY PARK, Pa. (AP) — After a deep ball bounced off his hands, KJ Hamler pulled Sean Clifford aside and told his quarterback he owed him one.

It didn't take long for Hamler to make it up to him.

The speedy wideout burned the Michigan secondary two quarters later and hauled in a perfectly thrown 53-yard touchdown pass to help propel No. 7 Penn State to a 28-21 win over No. 16 Michigan on Saturday.

Clifford wasn't surprised to see the nearest Michigan defender nearly 10 yards behind Hamler, who finished with six catches for 108 yards.

"I know KJ's fast enough to get to that weakness in their defense every single time," Clifford said.

And the first-year starter is getting better at finding him down the field.

Clifford hit Hamler on a 25-yard pass to start the scoring, hooked up with tight end Pat Freiermuth for a 17-yard touchdown and ran for a 1-yard score to pace Penn State's offense.

Hamler also had a 100-yard kickoff return to start the second half called back on a holding penalty. That would've come in handy as Penn State's offense went cold for much of the second half.

The Wolverines battled back from a 21-7 halftime deficit and with just over two minutes to play, had a chance to tie the game on fourth-and-goal from Penn State's 3. But Michigan wideout Ronnie Bell dropped a potential tying touchdown with Penn State safety Lamont Wade playing tight coverage.

The Nittany Lions took control of the game early. Clifford hooked up with Jahan Dotson for 37 yards to set up the scoring toss to Freiermuth who beat Khaleke Hudson in coverage.

Penn State went up 14-0 on its next drive when Clifford scored on a 1-yard run made easier by a 44-yard rush from Ricky Slade. It got easier when back-to-back Michigan offside penalties moved the ball to the 1.

The Wolverines cut Penn State's lead to 21-7 with an eight-play drive that burned 4:27 before halftime. It ended with Zach Charbonnet beating Penn State defenders to the end zone on a 12-yard run.

Michigan: The Wolverines did a solid job against Penn State's high-pressure defense gashing the Nittany Lions for a season-high 417 yards. They had all the momentum in the final quarter and had the look they wanted on the fourth down play that turned out to be the difference.

Penn State: The Nittany Lions averaged 7.0 yards per play in the first half, but just 1.9 in the second until Hamler's 53-yard touchdown catch.

Michigan coach Jim Harbaugh criticized the officiating afterward, not happy with the way his receivers were defended on the Wolverines' later possessions.

Michigan was flagged eight times for 48 yards while Penn State was called five times for 58 yards.

"It'll be interesting to compare some of the scenarios in the game on calls," Harbaugh said. "Thought some of our receivers were getting tackled at the end."

With their backs to Penn State's 21,000-seat student section to start, the Wolverines lost track of the play clock and had to take a timeout before their first snap.

A false start on third-and-long on their next drive foiled any chance of converting, and three offsides infractions backed Michigan's defense up and helped set up a pair of first-half Penn State touchdowns later in the half.

Penn State linebacker Micah Parsons was everywhere in this game, battling through double and triple teams to lead the team with 14 tackles.

Leading 21-7 early in the third, the Nittany Lions went three-and-out and risked giving Michigan good field position with punter Blake Gillikin standing close to his own 10.

But Penn State's specialist blasted the ball nearly 60 yards in the air and gunner Dan Chisena blew Donovan Peoples-Jones up for a loss at his own 10-yard-line. The Wolverines punted the ball back seven plays later.

No. 6 Wisconsin lost on a last-second field goal to Illinois earlier in the day, leaving room for the Nittany Lions to move up with the win.