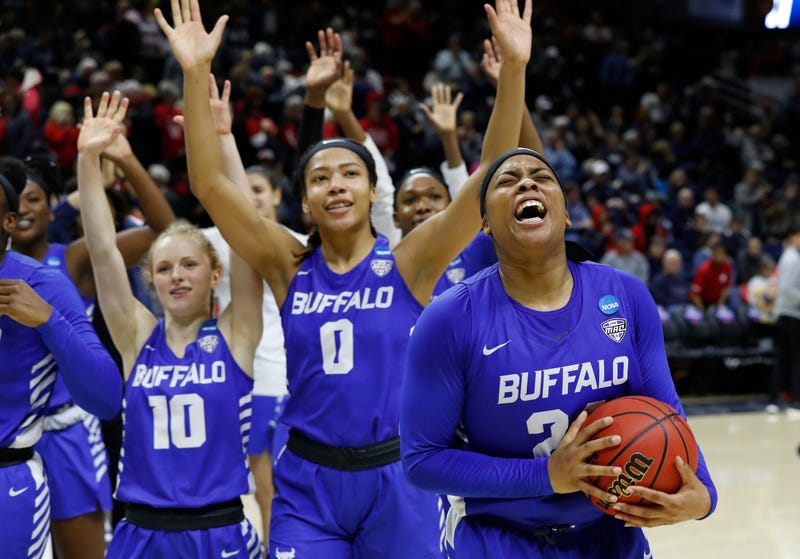 NEW YORK (AP) — It was some opening day for the women’s NCAA Tournament.

Two games went to overtime — which is one more than the first round last year — while many others came down to the final minute.

Missouri edged Drake in OT as did Marquette over Rice. The Golden Eagles rallied from a nine-point deficit in the final 2:46 of regulation to secure the victory.

Mercer gave Iowa all it could handle and fell just short of becoming the first 15-seed to ever win a game. The Bears fell short in the end and the 15s are now 0-103 in the history of the tournament.

Last season, only five games were decided by single digits in the opening round. This year’s tournament topped that mark by the end of the first day with six.

“It’s great isn’t it? I had my eye in some games, but tried not to watch too much because they are so emotional - the Iowa-Drake - these games were crazy,” Miami coach Katie Meier said. “I was glancing, but I really tried to stay away because I knew this was going to be a close game. For women’s basketball, it’s fantastic.”

The Hurricanes had their own scare from Florida Gulf Coast before pulling away in the end to avoid becoming the first No. 4 seed to lose in the opening round since 2012.

It wasn’t all about the close games. The top seeds rolled as Louisville, Mississippi State, Oregon and UConn had easy victories. The Cardinals did so without coach Jeff Walz, who was suspended for the game. He spent the game next door to the arena at a local pub.

Another ACC team had a solid return to the NCAAs. Clemson beat South Dakota, earning the Tigers’ first NCAA tournament victory since 2001.

STREAK BUSTERS: It wasn’t a great day to have a long winning streak. Mercer saw its 17-game run snapped by Iowa. Florida Gulf Coast had won 19 in a row before losing to Miami. Rice had a 21-game streak going and looked like it was going to extend it until falling to Marquette in OT.

A reporter asked Missouri State coach Kellie Harper if she remembered the last time she was involved in an NCAA Tournament game in the state of Iowa. She most certainly did. “It was a good one. It was a really good one,” she said. “You and I might be the only people in here that know what we’re talking about.” As Kelly Jolly, the future coach helped Tennessee stun an unbeaten Connecticut team 91-81 in a regional final in Iowa City. Harper had missed the first 16 games that season because of a knee injury and the Lady Vols entered NCAA play with 10 losses. “I scored a couple of big buckets,” she said with a smile. “I didn’t do that a lot. I passed it to my really good teammates.” She had more than a couple of buckets, finishing with 19 points. And those teammates? One was Chamique Holdsclaw, who scored 21 in that game and then led the Lady Vols to the national championship.

Facing an Iowa State team that’s heavily favored, New Mexico State’s Brooke Salas is drawing inspiration from the Aggies’ men’s team, which hung with fifth-seeded Auburn all the way in a 78-77 loss Thursday. “At least for me it was very inspiring and motivating,” said Salas, the Big West player of the year. “It was awesome to see them compete with a team like that. Honestly, after watching the game, I was ready to play right then.” Salas and her teammates also can draw on coach Brooke Atkinson’s slogans for motivation. “Every day, we have a quote and yesterday my quote was, ‘When you face a Goliath, everyone has a David in them,’” Atkinson said. “But really, we keep things the same. We just continue to do what we’ve done and focus on us. It’s worked well for us.”