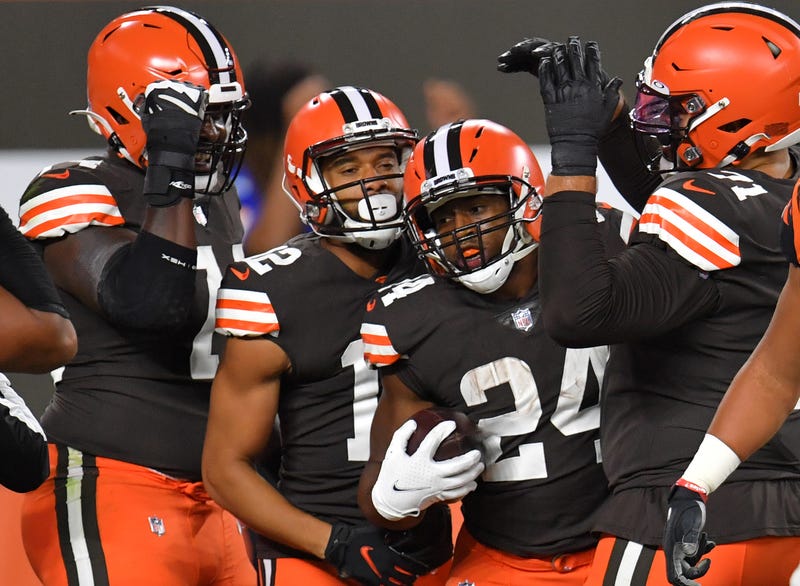 Nick Chubb #24 of the Cleveland Browns is congratulated by teammates after scoring a touchdown against the Cincinnati Bengals at FirstEnergy Stadium on September 17, 2020 in Cleveland, Ohio. Photo credit Jason Miller-Getty Images
By Daryl Ruiter

CLEVELAND, Ohio (92.3 The Fan) – Rumors of the Browns demise in 2020 following a disastrous opener in Baltimore were greatly exaggerated.

With a maximum allowed crowd of 6,000 fans in attendance, Cleveland got their offense on track at the expense of the Bengals.

Baker Mayfield outdueled Joe Burrow, Nick Chubb and Kareem Hunt combined for over 200 yards rushing and 3 scores and the Browns pulled it together for their first win of the season, 35-30 Thursday night at FirstEnergy Stadium.

“We do not ride the wave. We just show up and play, and we try and learn from our mistakes and be one game better each week,” head coach Kevin Stefanski said of bouncing back from Sunday’s 38-6 blowout in Baltimore. “The guys understand that. It is not a marathon. It is 16 sprints.”

Mayfield completed 16 of 23 passes for 219 yards, 2 touchdowns – one of them on a deep ball to Odell Beckham Jr. – and an interception in the win.

“It builds an enormous amount of confidence,” Mayfield said. “If we start clicking and keep getting better, this is going to be a fun ride.”

With the Bengals playing catch-up all night, Burrow threw it 61 times and completed 37 passes for 316 yards with 3 touchdowns in the loss as Cincinnati fell to 0-2 for the third time in 4 years.

Chubb carried 22 times for 124 yards and 2 touchdowns and Hunt ran it 10 more times for 86 yards and a score. He also caught another touchdown.

“I think we did a great job of running the ball as a team,” Chubb said. “It starts with the O-line. They did a great job getting push for us. They were leading guys and they opened up so many holes for us. There were holes everywhere.”

Defensive end Adrian Clayborn, starting in place of Olivier Vernon who was sidelined with an abdomen injury sacked Burrow for loss of 11 on a third-and-5 forcing Randy Bullock to settle for a 38-yard field goal to give the Bengals their only lead of the night, 3-0.

Clayborn would depart in the first half with a hip injury and he did not return.

Mayfield came out firing. First to Jarvis Landry for 9, then to KhaDarel Hodge for 26 – both off play action before finding tight end Austin Hooper for 11 more. Mayfield kept it for 10 and a first down before Chubb took it the remaining 11 yards to the end zone, bouncing off 3 defenders for a 7-3 Browns lead with just under 2 minutes to play in the opening quarter.

The Browns didn’t take long to score on their next possession.

After Chubb run for 13, Mayfield fired a 43-yard touchdown strike to Beckham for a 14-3 lead with 11:54 left in the first half which was set up thanks to something Mayfield spotted right out of the gate.

“The first play of the game, we ran a keeper to the left and the comeback [route]. We saw how the guy was playing it, and he was really aggressive all over him,” Mayfield said. “We knew that we were going to have a shot at that and come back to it. We called it at the right time, and he ran a great route.”

Mayfield connected with Kareem Hunt for a wide-open 6-yard touchdown and a 21-10 Browns advantage with 1:31 left in the half that capped a 12-play, 63-yard march. Cleveland got in despite the officials missing an egregious holding of Beckham’s jersey streaking up the near sideline on another deep ball by Bengals corner William Jackson III.

The first half was an orchestrated symphony of balance for Stefanski and the Browns – 14 passes and 14 runs – that saw Mayfield complete 11 of 14 passes to 6 different receivers for 167 yards and a pair of touchdowns.

Stefanski rolled the dice and went for it twice on fourth down to open the third quarter.

The first attempt resulted in Jarvis Landry converting with a 22-yard catch, but Chubb was stopped on fourth and goal from the 2 inside the 1 to keep it a 1-possession game, 21-13.

Prior to the goal-to-go sequence, Chubb was ruled down at the 1 after a review of a 23-yard run to take a touchdown off the board. Since 2018, Chubb now has 25 rushes of over 20 yards, the most in the NFL.

Myles Garrett got the ball right back when he strip-sacked Joe Burrow, and defensive end Joe Jackson fell on the loose ball at the 1 for the Browns.

“I saw a chance to get a hit on him and try to take the ball away and make a game changing play,” Garrett said. “Just swing and hit him.”

Chubb plowed in for his second touchdown of the night on second down from a yard out to put the Browns in front 28-13.

“We want to be aggressive and I think 7s over 3s are just a huge deal,” Stefanski said. “We’re going to trust our guys in moments like that.”

On the ensuing possession that saw Cincinnati start at their own 40 after Parkey’s kickoff went out of bounds short of the goal line, Burrow converted a fourth-and-5 at the Cleveland 20 with a 7-yard run but despite a defensive holding, the Browns defense held and forced Bullock to kick a 27-yard field goal to pull the Bengals within 28-16 with 20 seconds left in the third.

Kareem Hunt ripped off 6 carries and 41 yards before Mayfield was picked off looking for tight end Harrison Bryant over the middle at the goal line by cornerback William Jackson, who returned it 30 yards but a personal foul on defensive end Khalid Kareem for blowing up Mayfield after the throw moved the ball back to the 17.

Burrow marched the Bengals 12 plays and 83 yards in a hurry to pull within 28-23 after finding Mike Thomas on a quick slant for a 4-yard touchdown with 5:55 remaining. Cincinnati converted their third fourth down in as many tries on the drive.

“It starts up front. The offensive line played great,” Mayfield said. “Those were some big holes. It was a great effort by our offensive line and our running backs.”

Chubb did most of the work early while Hunt finished it off, but don't expect that to be the pattern going forward.

“Kareem is a great back and I think we should get him involved earlier in the game,” Chubb said. “Tonight we saw what he can do. He had 8 carries for [86] yards so we need to get him the ball early.”

Burrow found receiver Tyler Boyd in the back of the end zone with 43 seconds remaining to cap a 16-play, 75-yard drive to provide the final score.